On some discussion with colleagues I realised that a technique I took for granted is often not used by others so I wanted to do a write up of how I use them to further the general ‘make my team good at the software’ remit.

You can see Part 2 of my thoughts on CRC cards here: https://medium.com/@defmyfunc/how-i-use-crc-class-responsibility-collaboration-cards-every-day-part-2-8f9a6f79f7c2

I first read about these in the White XP book but I didn’t really use them until I was introduced to them by Kevin Rutherford when he worked with us at the BBC as part of the Software Craftsmanship program we had there. So massive props to him (https://silkandspinach.net/).

The views in this article are my own and are not necessarily endorsed by my employer.

What are CRC Cards?

The only issue I take with that description is the name. This may sound like semantics but I have tended to find the technique more successful if you think in terms of objects (ie pretend the system is actually running) instead of classes. But given my internal biases I think thats true of pretty much everything in software development.

When do I use them?

The answer to this is … all the fricken time. As a ‘Tech Lead’ they are invaluable to me as they allow me to abstract myself from the code but still offer value to my team by exploring problems with them.

You/Your team have just finished a task. Woo hoo. Good job! Now is the time to reflect. Write up a CRC card(s) for the task you have just completed.

As you practice asking your self and the team these questions, you’ll start to build the mental model of the part of the system you are working in.

You/Your team have just finished a story. Woo hoo! Good job! Now is the time to reflect. Write up a CRC card(s) for the story you have just completed.

On the assumption that a task is smaller than a story… then this may involve writing more cards. You should have a slighly bigger picture to work with and a genuine view on the end to end value for a particular thing. This is a great time to reflect :)

Look over the cards, ask yourself/your team the same questions as before… anything new? what was changed? was there a better place to put it? You can probably now also start asking questions like… did we introduce any new coupling? (or connascence http://connascence.io/) was this the right thing to do? Did we intend to do this or is it an accident? Could we have done it better? How might we refactor this to improve it? Did this story have a wide impact or narrow impact? Is that what we thought would happen?… etc… etc…

You/Your team have just finished an epic. Woo hoo! Good job! You lot are awesome. Now is the time to reflect! Write up a CRC card(s) for the epic you have just completed.

On the assumption that a story is smaller than an epic… then this may involve writing more cards. This is probably the biggest picture you have had to work with.

This is a great point in time to run a ‘technical retrospective’ with your team. Have cards written up for all the objects modified/created/deleted by your epic and sit down as a team and discuss. Did you build what you thought you would at the begining of the epic? If not why not? Are there any changes in there that where completely unexpected? What would you do to refactor it?

For instance, on one of my teams I did the following in advance based on a piece of work we had just completed: 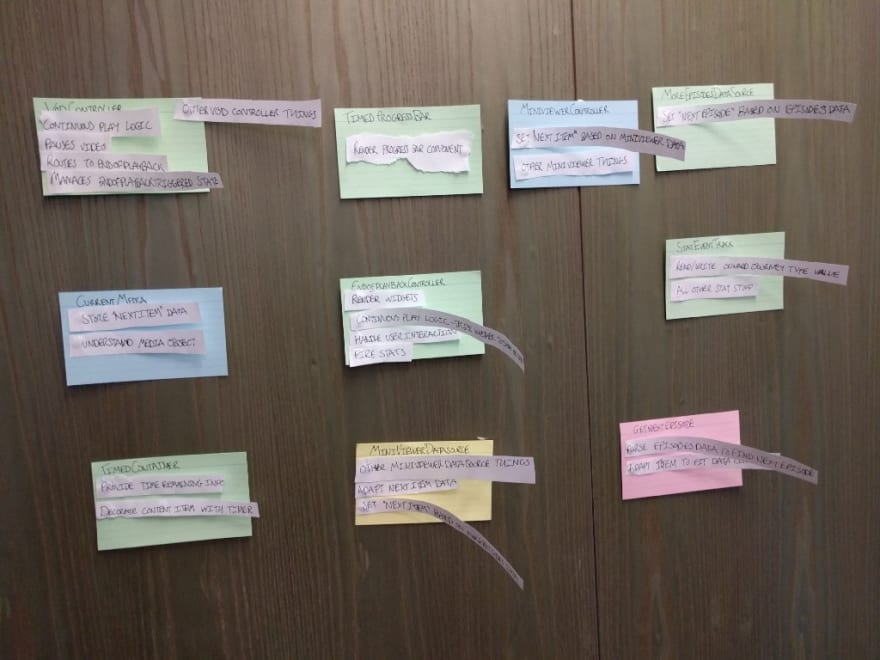 And then asked the team to collaboratively refactor based on our teams technical strategy. They did this: 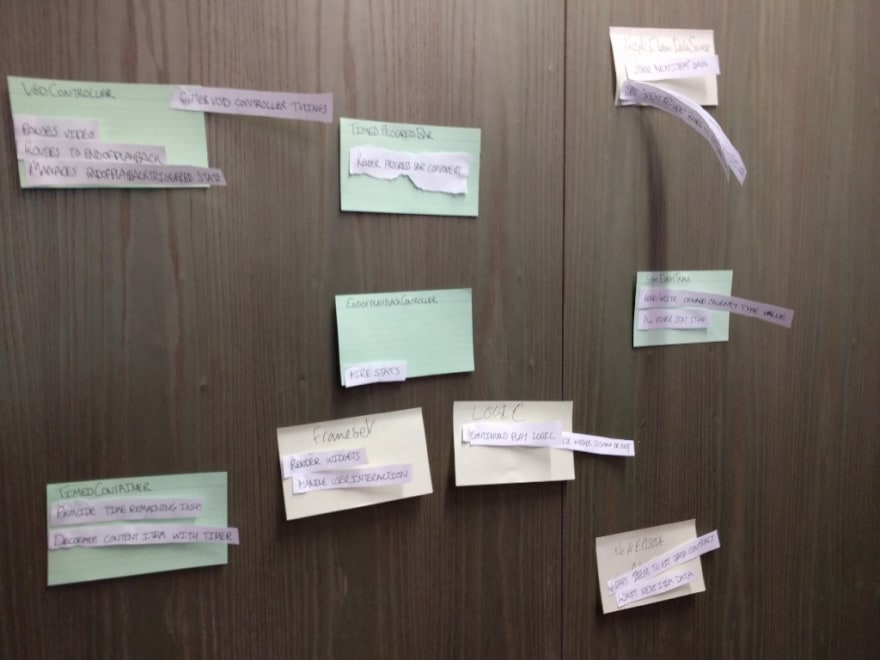 They consolidated genuine duplicated logic, making one of our controllers more like other controllers in our application and reducing our dependency on some objects.

This not only acted as a knowledge share with those members of the team who hadn’t worked on the piece, but also meant the whole team could be actively involved in considering its future direction and everyone had their opinions taken into account.

In my next piece on CRC cards Ill write about how I use them upfront to aid design decisions.