A method for digitizing my life

When I first went paperless, I didn’t go quietly. It was a process. Here now is the most recent and workable solution I have. It may be pricey with all the different tools involved, but it works very well!

I used to own a Fujitsu ScanSnap S500M, it was a great machine. You could load sheets of paper to it, and it would scan them in bulk. I used it for 7 years plus. The reason I stopped was Apple’s decision to move to the new 64-bit only architecture with macOS Catalina. Also, Fujitsu would not support 64-bit software for an old-timer like the ScanSnap S500M.

The old way worked great. I scanned docs on the Fujitsu and Hazel monitored the folder, scanned with OCR from PDFPen using the same script as below and sorted them with a new naming scheme.

Once I moved to Catalina, I looked for other ways of doing things. I already had been using ScannerPro iOS but still relied on the “Old Workflow” for most of my documents.

For the new method, I had to use multiple software titles, my iPhone 11 Pro and the Mac.

This process isn't cheap, but I had purchased many of the apps bit-by-bit along the way, so it didn't sting all at once

When the scannable material enters my home via mail courier, I grab my phone and open ScannerPro to scan the document(s).

I have ScannerPro set to auto scan the document. It’s a quick process, ScannerPro finds the edges of the document and makes a copy. If there is over one document (or another side to the document), I can add more by letting the software scan another document.

Once I get all the documents scanned, it’s time to save the file in ScannerPro. The software also allows for color correction for Color Documents, B&W Documents, Color Photos and Grayscale Photos, plus you can crop and rotate scans too.

There is a setting in ScannerPro to name new files. I use the default name set to YYYY-MM-DD-. I use hyphens between the year, month and day, plus I add an extra at the end for the actual name of the file, such as ConsumersEnergy or Dentist. E.g. 2020-04-15-PropertyTax

After I save the file in ScannerPro, I set it to save to Dropbox, the apps/ScannerPro folder. This is where the magic beings.

Hazel watches the apps/ScannerPro folder for any activity and moves it to a local folder, ~/Inbox. 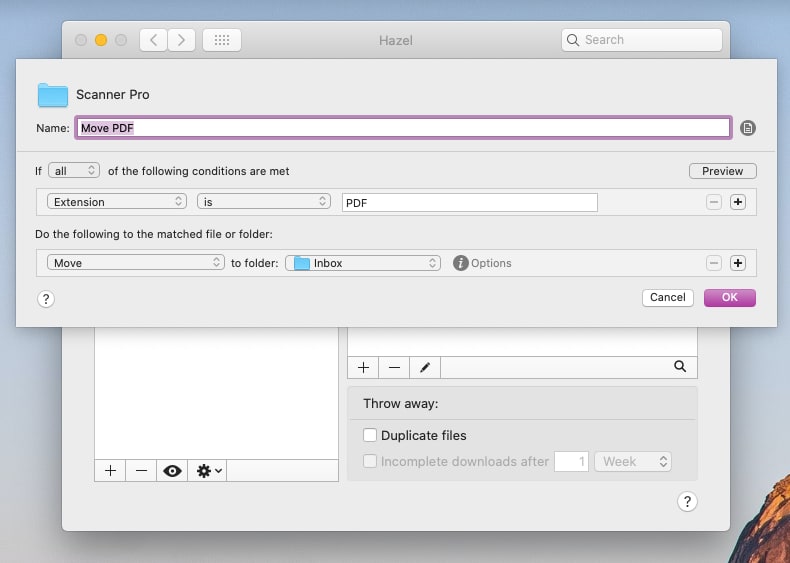 There is also a Hazel script that watches the Inbox folder from the previous step. 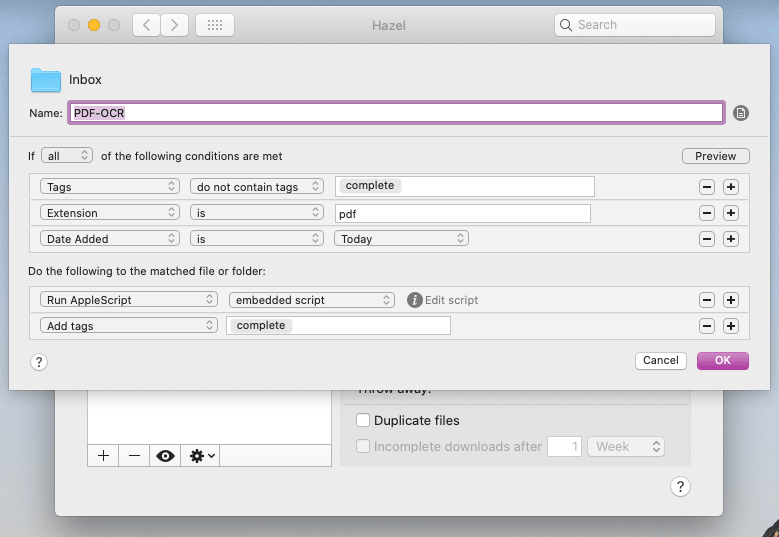 When Hazel finds a file named with the extension PDF, it activates the script from Katie Floyd 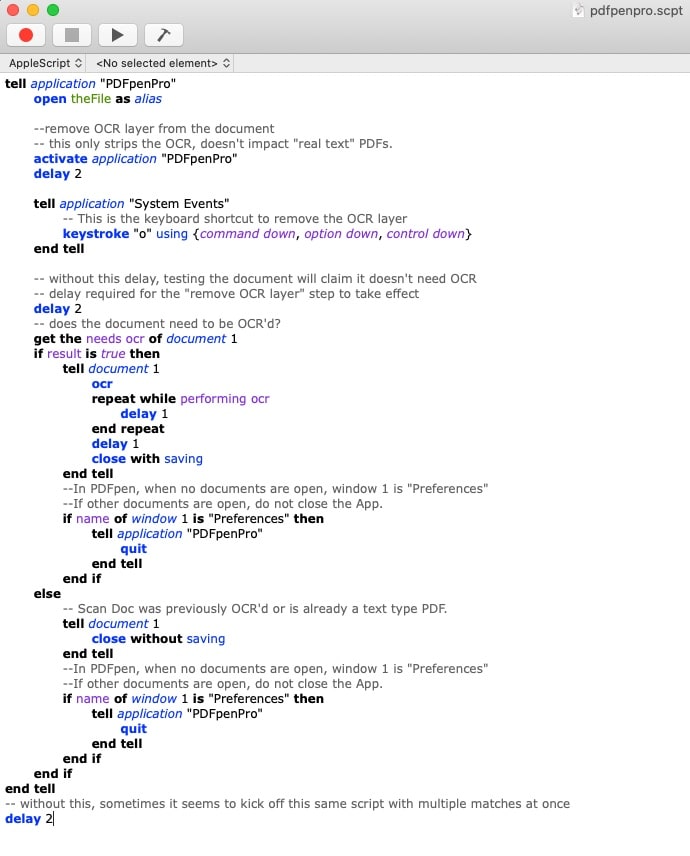 The script makes use of PDFPen Pro (regular PDFPen doesn't seem to work. That script automates the OCR process by opening PDFPen Pro and scanning the document then converting images of typed, handwritten or printed text into machine-encoded text that is searchable. This is huuuge.

After the script executes, and PDFPenPro OCR's it Hazel adds a complete tag. The complete tag prevents the document from being OCR'd again by PDFPen and begins a second process.

Hazel is looking for the complete tag on several criteria (such as account number, company name, something unique to the document) and then renames the file. As of this writing, I have 17 criteria in Hazel with which to rename the bills and file them. 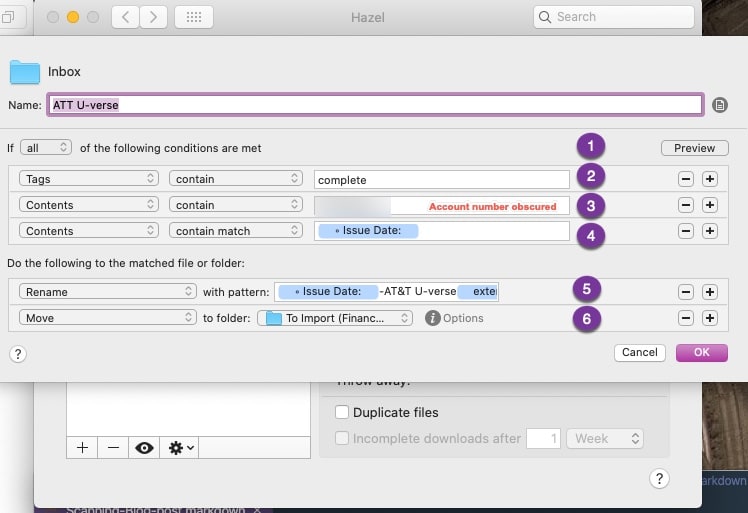 I store my EagleFiler Finance Library on an external machine, not in Dropbox because of the relatively sensitive nature of the documents being scanned. I probably should encrypt them locally so when I store them with Backblaze they are not viewable. I also use EagleFiler to long-term store my email messages, cause I hang on to email. That has been indispensable when doing taxes or trying to find a license file for software I brought years ago. I want to use EagleFiler more, but without an iOS client, I have difficulty working it into my workflow. There are several brilliant suggestions on the c-Command website, but I just can’t make myself use them.

Devonthink Pro
I’ve owned DTPro Office v 2 for a long time and still haven't really “gotten it”. It is just so big and does so much, I can’t get it to do what I want. The interface has been unattractive for some time and just doesn’t feel like a Mac app to me.

When DT came out with version 3, I ran the beta for a while but it still didn’t stick. It’s just too expensive for me to not use it to its full capacity, so I have moved on. Which is unfortunate, because DevonThink have an iOS app, but that too doesn’t fit my workflow; not from a lack of trying.

Tesseract OCR Is a free open-source library for OCR. I originally had trouble installing it, but now it appears there is pre-built packages. For MacOS we can use Homebrew package manager or Macports package manager.

You still need a 3rd party application to interact with Tesseract, so that may add some cost or extra layer of learning.

Adobe Acrobat Pro DC is available. It runs $14.99/mo and its Adobe. I don’t run any Adobe software on my Mac, except Photoshop or Lightroom, which is part of the Adobe Photography bundle.

A key to my process is backup, maybe a post for another day. I, like many, used to use Crashplan to back up my machines. When they changed their pricing model, I switched to Backblaze (affiliate link). Backblaze has already saved my bacon many times.

I had to reformat my drive that had my photos on it since I accidentally hit the RAID 0 switch and it erased my two drives on my backup device. I had to order an external HD from Backblaze for $189 and they copied all my files to that disk and sent it to me. All I had to do was send it back to Backblaze for about $15 via FedEx.

Moral of the story, backup, using the 3-2-1 strategy A 3-2-1 strategy means having at least 3 total copies of your data, 2 of which are local but on different mediums (read: devices), and at least 1 copy offsite. I’m so glad I had that backup.

This new workflow has worked great for me and I hope it helps you. If you have questions, let me know.

How to master grid layout in iOS with SwiftUI

How we make Flutter work with CallKit Call Directory