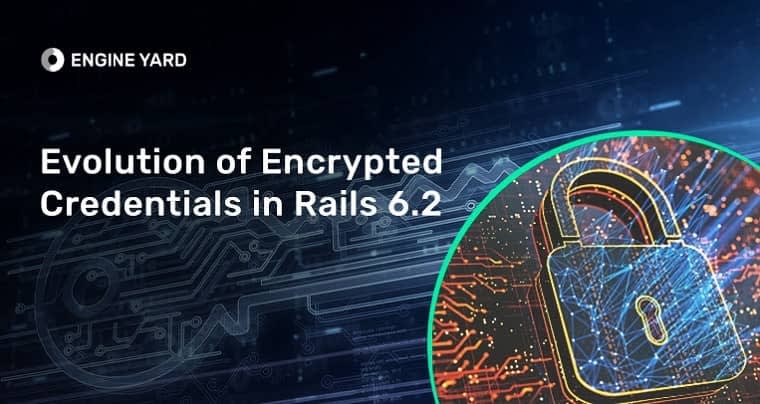 Your blog The concept of encrypted secrets evolved and acquired a better shape with each update of the Rails version. Recently, Rails 6.2 has brought in many such updates to the credentials feature. Let us analyze and discuss encrypted credentials further, how to read them, the advantages, and finally, how to manage a secret key base.

Encrypted secrets were introduced with Rails 5.1 in a view to bringing more security to the secrets handled. In this version, these were referred to as ‘secrets’ and were referenced by

The secrets.yml.enc file handles the secrets along with an encryption key.

Before this version of Rails, there were two methods to commit the secrets.

By default, from this version of Rails, the secrets were passed as secrets.yml file along with an encryption key. Without this key, the secrets stored in the file will look like some junk characters. To initiate using secrets, the user needs to run:

An update to the older secret handling, this Rails version removed plain text secrets, and only encrypted credentials were allowed. Credentials were stored in config/credentials.yml.enc, and the key was stored on config/master.key. Thus users could deploy code and credentials together and store all credentials in one place.

Here, multi-environment credentials were handled by specifying explicitly, and the configuration was accessed by mentioning the access_key_id.

The latest update made it to separate credential files for each environment. This built-in feature necessitates separate encryption key for each credential file, thus guaranteeing more security.

A global credential file is enough for multiple environments. And when the environment is passed, two files would be created:

Here’s an example of how it works:

If the environment file is missing or not created, the default credentials.yml.enc file will be used.

Make sure to save the valid key and the credentials to avoid errors while running the code.

Our latest guide Rails encrypted credentials on 6.2 offer an interesting peek into the Rails credentials.

The main advantages of encrypted multi-environment credentials are as follows:

Rails is constantly improving the efficiency and scalability of the framework. With the multi-environment credentials enabled, applications used in multiple platforms and POD find it easier to keep the codes simple and accessible.

Know how to use Engine Yard Kontainers to connect to your database, enabling the Rails credentials for improved security.

To learn more about the older versions of credentials, check out Encrypted Rails Secrets on Rails 5.1