When you start your React project, you will be slightly confused about styling the app structure.

There are several ways to style React components, but the main question is how to choose the right method for styling your component.

Factors you should care about while picking styling architecture:

Note: each strategy has multiple ways to handle so we will present some of them in detail

CSS or SASS Stylesheets is a styling strategy that involves the use of external CSS or SASS stylesheets that can be imported into your React components, it will mount when component mount then becomes general never unmount until you refresh the app.

BEM encourages developers to divide layouts into blocks and nested elements, the appearance of a block or element should also be identified and applied using modifiers.

There are different ways for BEM naming conventions on their website.

Base styles override the default styles and are mainly applied using element selectors it is like your app skeleton style in another word commonly called reset.

Layout styles are for major objects like headers and sidebars. They are applied using IDs or classes with generic helper declarations optionally prefixed with “l-classname”.

Module styles are for smaller, reusable objects like buttons and lists, each commonly with its file.

State styles are for changeable states, like hidden or disabled. With is or has a prefix

Theme styles are optionally used for changing the visual scheme.

A CSS Module is a CSS file in which all class names and animation names are scoped locally by default. When using CSS Modules, each React component is provided with its CSS file, which is scoped to that file and component alone.

If your React app is created by create-react-app so no need for extra work to go with the CSS module as it is supported already if not you need to add a task to your webpack to compile module files.

You will import your style sheet as an object and deal with it totally as a normal Javascript object and read properties from it, and for the “style.module.scss” you could write a normal sass code that you used.

Hint: if you want to apply general style for a specific class outside the modularization behavior in the module file you could use (: global) keyword to do it

CSS-in-JS is a technique that enables you to use JavaScript to style components. When this JavaScript is parsed, CSS is generated (usually as an <style> element) and attached to the DOM.

It uses tagged template literals to style your components. It removes the mapping between components and styles, making it easier to achieve low-level styling.

As you see in the example above CSS in js gives us the power to render the style conditionally and could be changed depending on a specific prop directly.

It provides the familiar JavaScript syntax for styling components and creating dynamic themes. By letting users provide dynamic props for styling, has an edge over some of the other libraries in this list. 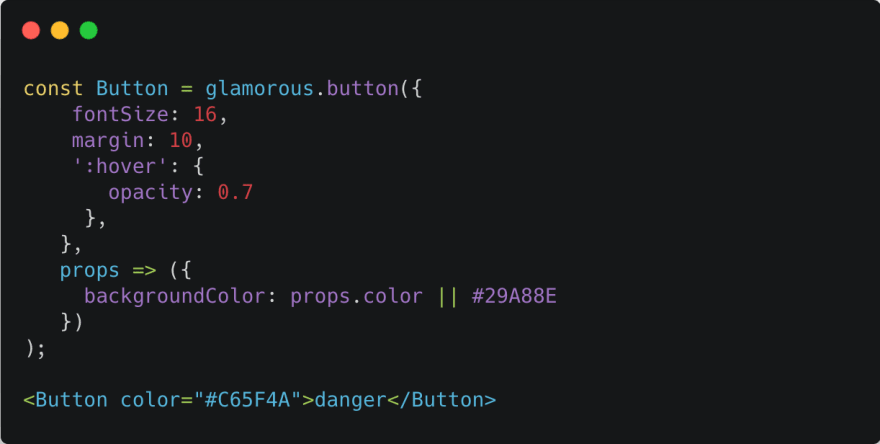 It is the same logic as styled-components and most of the CSS in js libraries are just small differences in syntax but overall the big deal here is the power in handling component styles with the props.

Each of these methods has its advantages and disadvantages, and it all depends on your personal/company/team preferences and the complexity of your application.

Also, whatever styling strategy you may decide to use, it is still basically CSS

You can write CSS as you’ve always done, but React and other libraries offer solutions that can also help with styling.

Thank you for reading, if you have any comments let me know, please :)

Sending an Email With React Without a Backend Server

Dina Khaled
I specialize in creating front-end apps for web and mobile devices using modern tools and concepts.
What was your win this week?
#discuss #weeklyretro
If you could start a company, what would it be?
#discuss #career #entrepreneur
Stop saying "Stop using Else" and other nonsense! ...
#beginners #career #codenewbie

Once suspended, dinakhaled will not be able to comment or publish posts until their suspension is removed.

Once unsuspended, dinakhaled will be able to comment and publish posts again.

Once unpublished, all posts by dinakhaled will become hidden and only accessible to themselves.

If dinakhaled is not suspended, they can still re-publish their posts from their dashboard.

Once unpublished, this post will become invisible to the public and only accessible to Dina Khaled.

Thanks for keeping DEV Community 👩‍💻👨‍💻 safe. Here is what you can do to flag dinakhaled:

Unflagging dinakhaled will restore default visibility to their posts.