This is an introductory tutorial on Docker containers. By the end of this article, you will know how to use Docker on your local machine. Along with Python, we are going to run Nginx and Redis containers. Those examples assume that you are familiar with the basic concepts of those technologies. There will be lots of shell examples, so go ahead and open the terminal.

Docker is an open-source tool that automates the deployment of an application inside a software container. The easiest way to grasp the idea behind Docker is to compare it to, well... standard shipping containers.

Back in the day, transportation companies faced the following challenges:

After the introduction of containers, bricks could be put over glass, and chemicals could be stored next to food. Cargo of various sizes can be put inside a standardized container and loaded/unloaded by the same vehicle.

Let’s go back to containers in software development.

When you develop an application, you need to provide your code along with all possible dependencies like libraries, the web server, databases, etc. You may end up in a situation when the application is working on your computer, but won’t even start on the staging server, or the dev or QA’s machine.

This challenge can be addressed by isolating the app to make it independent of the system.

How does this differ from virtualization?

Traditionally, virtual machines were used to avoid this unexpected behavior. The main problem with VM is that an “extra OS” on top of the host operating system adds gigabytes of space to the project. Most of the time your server will host several VMs that will take up even more space. And by the way, at the moment, most cloud-based server providers will charge you for that extra space. Another significant drawback of VM is a slow boot.

Docker eliminates all the above by simply sharing the OS kernel across all the containers running as separate processes of the host OS. 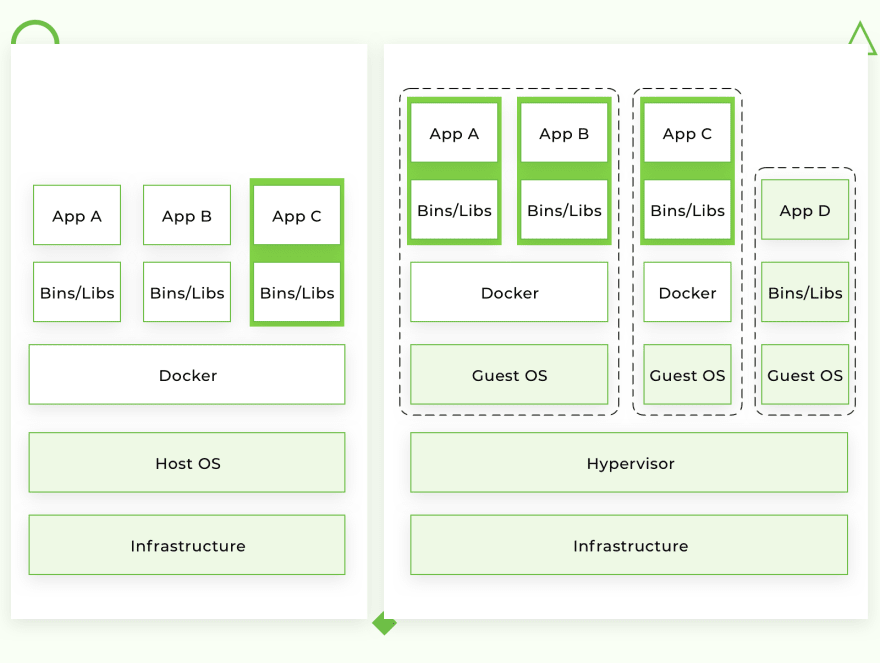 Keep in mind that Docker is not the first and not the only containerization platform. However, at the moment Docker is the biggest and the most powerful player on the market.

Why do we need Docker?

There is no need to install 3rd-party apps like PostgreSQL, Redis, Elasticsearch on the system – you can run it in containers. Docker also gives you the ability to run different versions of same application simultaneously. For example, say you need to do some manual data migration from an older version of Postgres to a newer version. You can have such a situation in microservice architecture when you want to create a new microservice with a new version of the 3rd-party software.

It could be quite complex to keep two different versions of the same app on one host OS. In this case, Docker containers could be a perfect solution – you receive isolated environments for your applications and 3rd-parties.

You can deliver your application in one piece. Most programming languages, frameworks and all operating systems have their own packaging managers. And even if your application can be packed with its native package manager, it could be hard to create a port for another system.

Docker gives you a unified image format to distribute you applications across different host systems and cloud services. You can deliver your application in one piece with all the required dependencies (included in an image) ready to run.

Docker can’t guarantee 100% dev / staging / production parity, because there is always the human factor. But it reduces to almost zero the probability of error caused by different versions of operating systems, system-dependencies, etc.

With right approach to building Docker images, your application will use the same base image with the same OS version and the required dependencies.

Out of the box, you have a unified way to read log files from all running containers. You don't need to remember all the specific paths where your app and its dependencies store log files and write custom hooks to handle this.
You can integrate an external logging driver and monitor your app log files in one place.

A correctly wrapped application will cover most of the Twelve Factors. By design, Docker forces you follow its core principles, such as configuration over environment variables, communication over TCP/UDP ports, etc. And if you’ve done your application right, it will be ready for scaling not only in Docker.

Docker’s native platform is Linux, as it’s based on features provided by the Linux kernel. However, you can still run it on macOS and Windows. The only difference is that on macOS and Windows, Docker is encapsulated into a tiny virtual machine. At the moment, Docker for macOS and Windows has reached a significant level of usability and feels more like a native app.

You can check out the installation instructions for Docker here.
If you're running Docker on Linux, you need to run all the following commands as root or add your user to docker group and re-login:

It's time to run your first container:

Let’s try to create an interactive shell inside a Docker container:

If you want to keep the container running after the end of the session, you need to daemonize it:

Let’s see what containers we have at the moment:

The ps shows us that we have two containers:

Note: there is no second container (the one with interactive shell) because we set the --rm option. As a result, this container is automatically deleted right after execution.

Let’s check the logs and see what the daemon container is doing right now:

Make sure the container has stopped.

The container is stopped. We can start it again:

Now, stop it again and remove all the containers manually:

To remove all containers, we can use the following command:

Starting from this example, you'll need several additional files you can find on my GitHub repo. You can clone my repo or simply use the following link to download the sample files.

It’s time to create and run more a meaningful container, like Nginx.
Change the directory to examples/nginx:

Warning: This command looks quite heavy, but it's just an example to explain volumes and env variables. In 99% of real-life cases, you won't start Docker containers manually – you'll use orchestration services (we'll cover docker-compose in example #4) or write a custom script to do it.

We can try to change /example/nginx/index.html (which is mounted as a volume to /usr/share/nginx/html directory inside the container) and refresh the page.

Let’s get the information about the test-nginx container:

To build a Docker image, you need to create a Dockerfile. It is a plain text file with instructions and arguments. Here is the description of the instructions we’re going to use in our next example:

You can check Dockerfile reference for more details.

Let’s create an image that will get the contents of the website with curl and store it to the text file. We need to pass the website url via the environment variable SITE_URL. The resulting file will be placed in a directory, mounted as a volume.

Place the file name Dockerfile in examples/curl directory with the following contents:

Dockerfile is ready. It’s time to build the actual image.

Go to examples/curl directory and execute the following command to build an image:

Now we have the new image, and we can see it in the list of existing images:

We can create and run the container from the image. Let’s try it with the default parameters:

To see the results saved to file, run:

To see the results saved to file, run:

What Best practices for creating images

A lot of Docker images (versions of images) are created on top of Alpine Linux – this is a lightweight distro that allows you to reduce the overall size of Docker images.

I recommend that you use images based on Alpine for third-party services, such as Redis, Postgres, etc. For your app images, use images based on buildpack – it will be easy to debug inside the container, and you'll have a lot of pre-installed system-wide requirements.

Only you can decide which base image to use, but you can get the maximum benefit by using one basic image for all images, because in this case the cache will be used more effectively.

Docker compose -- is an CLI utility used to connect containers with each other.
You can install docker-compose via pip:

In this example, I am going to connect Python and Redis containers.

Go to examples/compose and execute the following command:

The current example will increment view counter in Redis. Open the following url in your web browser and check it.

How to use docker-compose is a topic for a separate tutorial. To get started, you can play with some images from Docker Hub. If you want to create your own images, follow the best practices listed above. The only thing I can add in terms of using docker-compose is that you should always give explicit names to your volumes in docker-compose.yml (if the image has volumes). This simple rule will save you from an issue in the future when you'll be inspecting your volumes.

In this case, redis_data will be the name inside the docker-compose.yml file; for the real volume name, it will be prepended with project name prefix.

Without an explicit volume name, there will be a UUID. Here’s an example from my local machine:

Docker has some restrictions and requirements, depending on the architecture of your system (applications that you pack into containers). You can ignore these requirements or find some workarounds, but in this case, you won't get all the benefits of using Docker. My strong advice is to follow these recommendations:

To summarize this tutorial, alongside with IDE and Git, Docker has become a must-have developer tool. It's a production-ready tool with a rich and mature infrastructure.

Docker can be used on all types of projects, regardless of size and complexity. In the beginning, you can start with compose and Swarm. When the project grows, you can migrate to cloud services like Amazon Container Services or Kubernetes.

Like standard containers used in cargo transportation, wrapping your code in Docker containers will help you build faster and more efficient CI/CD processes. This is not just another technological trend promoted by a bunch of geeks – it's a new paradigm that is already being used in the architecture of large companies like PayPal, Visa, Swisscom, General Electric, Splink, etc.

The article is written by Alex Ryabtsev. This docker tutorial is originally published in Django Stars blog.

Scilab: A Beginner's Guide to Basic Commands I