This introductory article on geolocation testing is intended for quality assurance (QA) and test engineers working with web applications, and cross-platform (React Native) and native (iOS, Android) mobile applications. It offers step-by-step instructions on how to start geolocation testing on your project, and also describes the pros and cons of several possible approaches. Here you will also learn such key concepts as back-end representation, data generation, data validation, emulation, and testing levels using REST API.

It’s no longer just GPS navigation apps that use geolocation. Locations, route directions, and estimated time of arrival are features being implemented in transportation, food delivery, e-commerce, games, social media – in fact, the list of application categories not using geolocation is shrinking every day.

For an app-based company, business logic often depends on action triggers based on the location of people and objects. This makes a solid understanding of how to perform geolocation testing a must-have ingredient in making such projects a success.

Before diving in, a refresher on the definitions:

How geolocation is represented on the application backend

Geolocation requests and responses are represented as JSON (GeoJSON), and the content type that stores geodata is application/json.

GeoJSON is an open-standard format designed to represent simple geometry objects, along with their non-spatial attributes. It is based on JSON, the JavaScript Object Notation.

Of the many Geodata geometry objects, the key ones are point, path, polygon, track, and feature.

There are two important things to remember about the Point:

In a food delivery app example, the Point represents the pick-up location of the order, the drop-off location for the customer, and the delivery person’s location, typically with only their latitude and longitude coordinates. 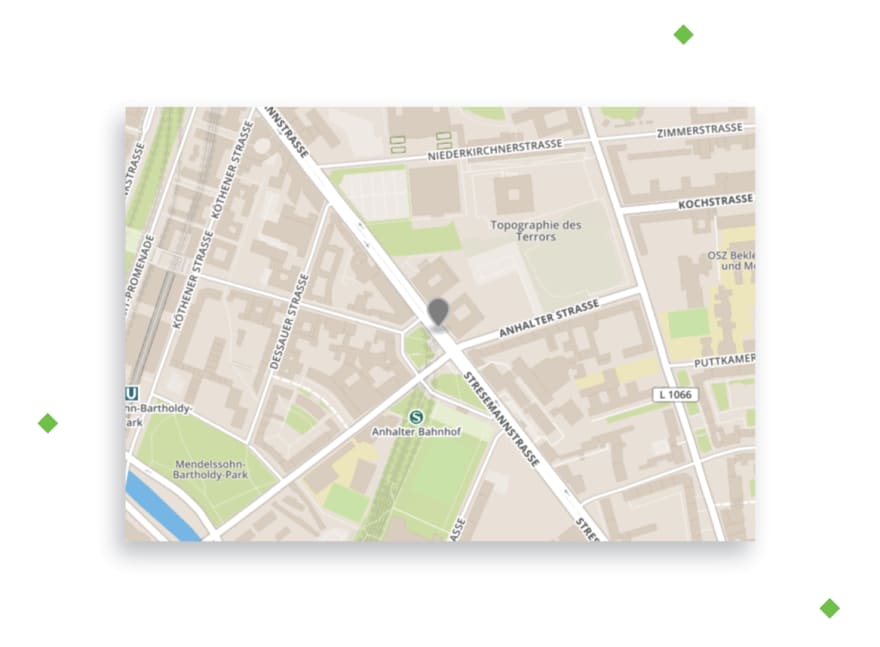 A Path is a set of Points. You connect two or more Points to get a Path. As a result, this feature can show how a device was moving during the day or build the path to a destination. 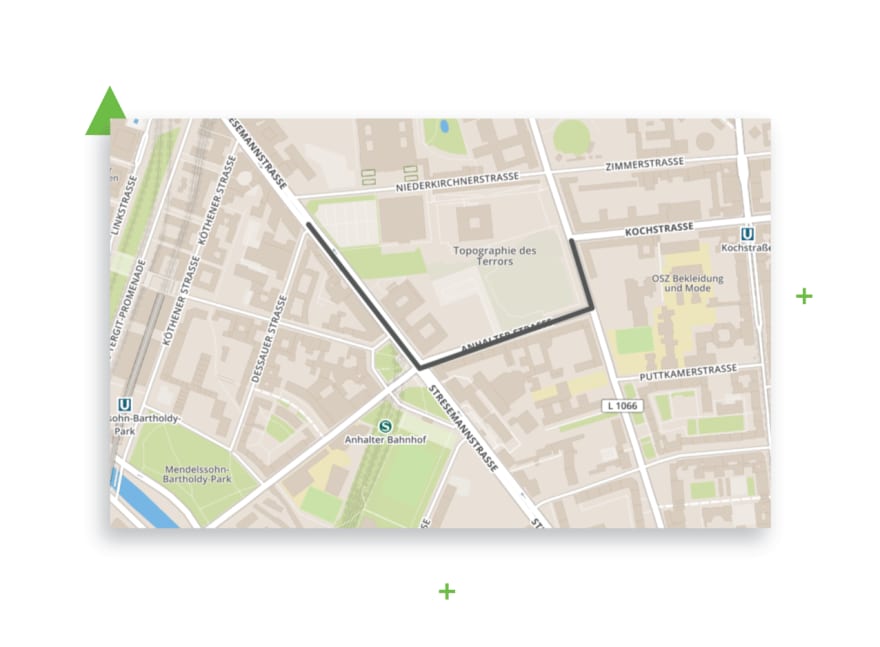 A Polygon is an enclosed set of points. A Polygon looks like a Path, but with one important difference. The main rule for a Polygon geo object is to have the same first and last Point. As a result, your Path ends at the same Point where it started and forms an enclosed set of points called the Polygon. In other words, we get an area we can calculate or define whether or not a Point belongs to specific Polygon (i.e., area). There is one issue with Polygon: this kind of an object cannot exclude another Polygon or Point from itself (i.e., you cannot create one Polygon with a hole in the middle). 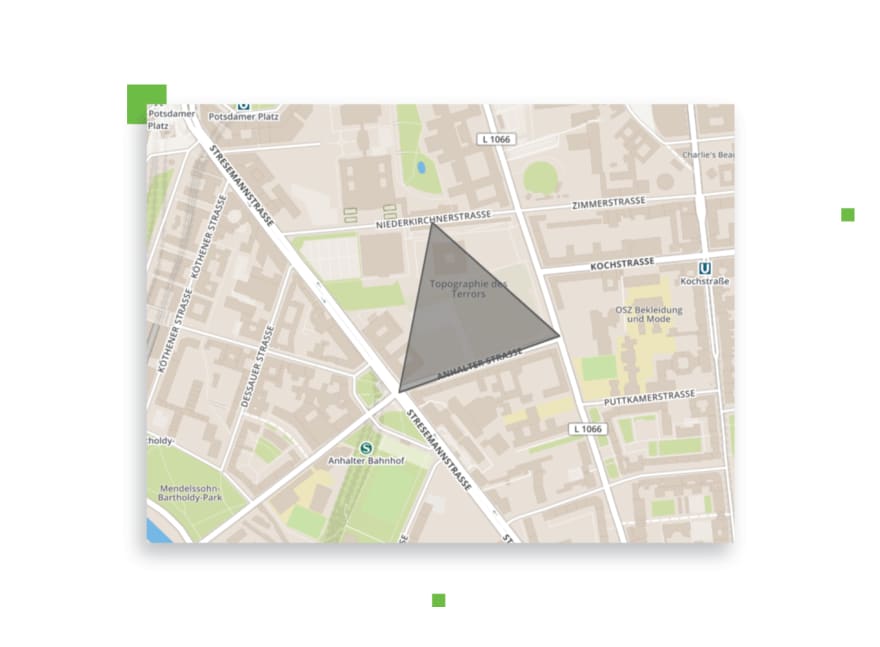 A Track is a set of Points with a Timestamp. Add time to every received Point, and you get a Track. Track provides information about a device’s location at each moment. This type of geo object is usually stored in GPX format, an XML schema designed as a common GPS data format for software applications. It can be used to describe waypoints, tracks, and routes.

In applications, this is useful for displaying a time when devices send coordinates, addresses, requests’ stage, etc.

How to perform geolocation testing

Because geolocation depends on devices and networks, and because real-life conditions are never ideal (in addition to the code itself), for best results it is always smart to test applications using a range of physical and emulated Android and iOS mobile devices. Let’s review the tools and steps that can help with geolocation testing.

Effective and thorough geolocation testing requires tools and services to help generate and validate test data. Using the tools below will increase the testing speed and provide extra time for exploratory or other testing types.

This free web service offers the ability to generate a GeoJSON code for Point, Path(LineString), and Polygon objects by simply clicking on the relevant place(s) on the map. Additionally, you can see the length of the built Path (in meters, kilometers, feet, yards, miles) as well as the square of the built Polygon (in square meters, square kilometers, square feet, acres, square miles).

This free web service helps validate GeoJSONs. Using this simple tool, you can paste any GeoJSON into the validator and get a visualization of the object on the map to verify whether it matches the expected result.

This free web tool is great for Track generation. It allows you to draw a Path, choose the needed speed, and download Tracks in various formats. The only inconvenience is a requirement to register to download files.

Data generation is only the first step, as it means nothing without emulation. Emulation assists in removing the need to run and drive all over the place for testing. Instead, use common approaches of emulation.

For Android-based devices, at the moment we have found 3 ways to do it: using Android API calls, built-in Android geo mock features, and purpose-built apps.

You can also emulate the Android device itself using your laptop or PC in connection with Android Studio. 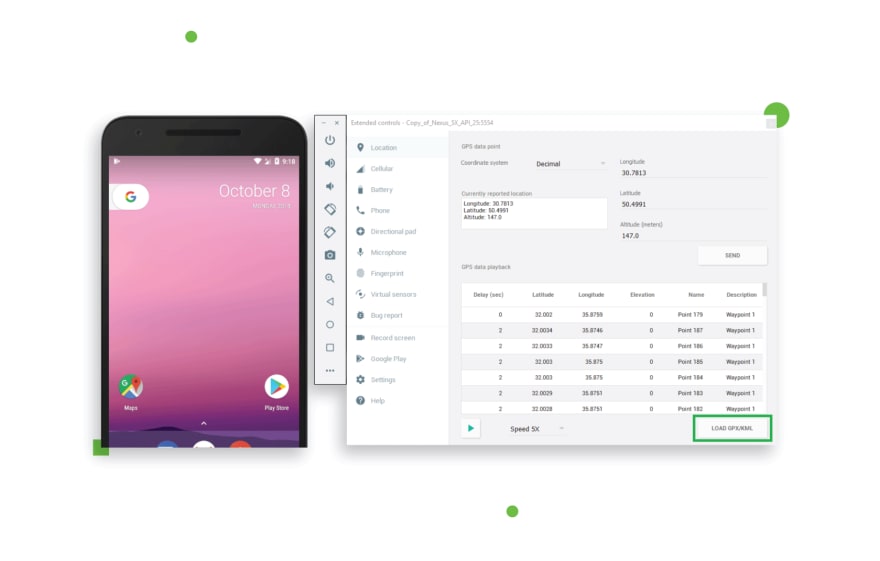 The easiest way to emulate location data is by using a dedicated app made exactly for this purpose. The only thing you’ll need is an Android device and the internet. Out of many apps in this category, one of the best is Lockito. This app can build a road-based Path from point A to point B, including a speed setting. Also, it allows for the reuse of previously created Tracks. 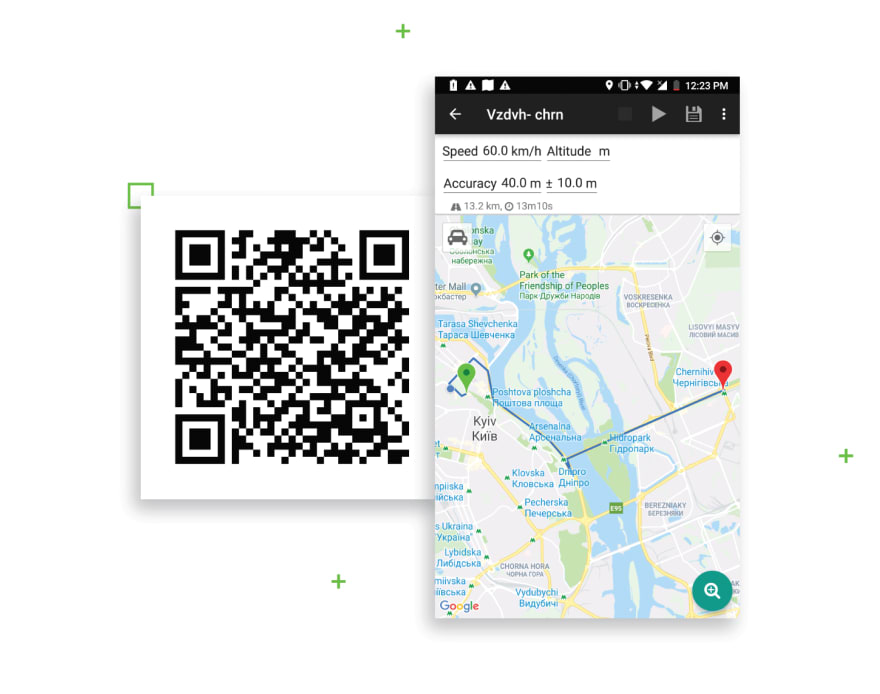 iOS devices can also emulate geodata, but it is not as easy as it is with Android due to App Store restrictions that do not allow apps to change geolocation position. Still, there are several ways to generate mock data for IOS devices.

Xcode is an integrated development environment for macOS containing a suite of software development tools developed by Apple for developing software for macOS, iOS, iPadOS, watchOS, and tvOS. This tool gives you an opportunity to mock data on emulators as well as on real devices plugged into the laptop. You will be able to set custom location data (Screen 1) and upload a GPX file to emulate movement (Screen 2) on the device. 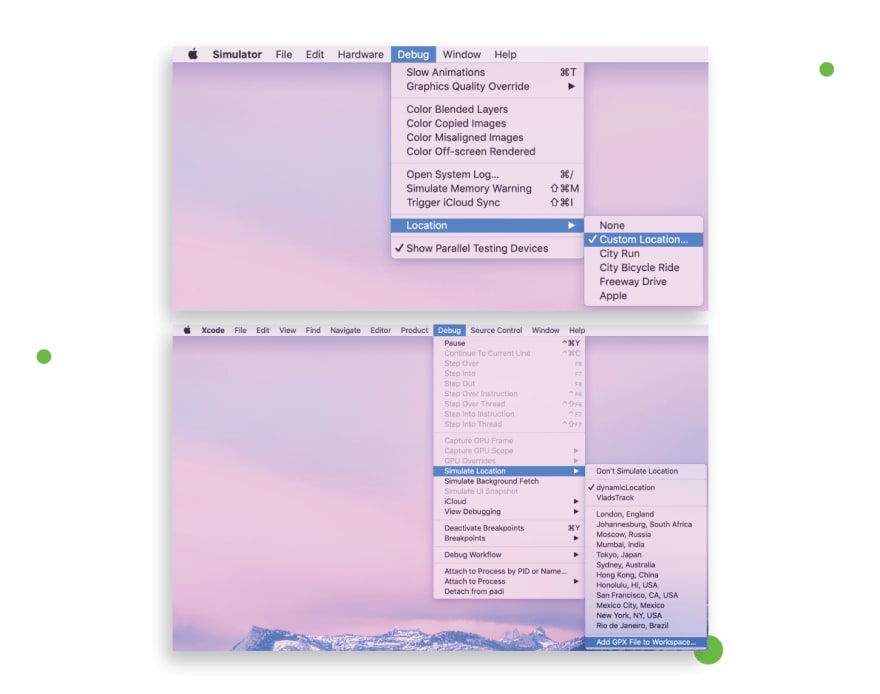 iSpoofer can help you mock location data only for a physical device (i.e., it does not mock data using an emulator). The only issue with the tool is that it is not free, with the exception of a 3-day free trial period. Still, Windows users can use it without creating a virtual machine with MacOS. 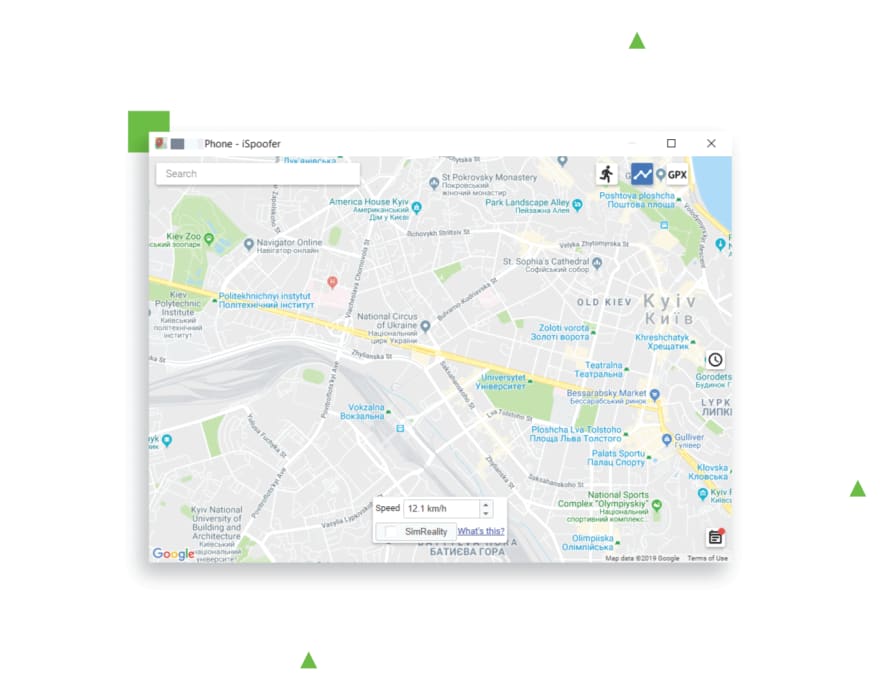 As you can see from the above, there are three key ways geolocation apps can be tested: API calls, on emulated devices using mock data, and on physical devices with real data.

Because all geolocation data is exchanged using APIs, the calls with which devices will communicate and exchange location data must be tested. We used Python with a Requests library, but any manual testing tool like Postman or scripts in any programming language will do. Of course, when testing API calls, you will need neither an emulator nor real devices.

Most Geolocation testing uses emulated devices with mock data, since the result is that all devices and emulators eventually generate API calls to communicate geolocation data with the database. Using emulators with mock data has its place, but you should be aware that this is still a very conceptual way to test and is only an approximation of real-world conditions.

Considering the above, real data testing on physical devices is definitely the most important level of geolocation testing, because we cannot predict all possible cases that can happen in real life using an application. While expensive and time-consuming, if used strategically this type of testing can help you avoid major problems in a chaotic environment where networks and devices are running in far-from-idealized conditions.

To summarize geolocation testing, it is definitely an important aspect of any location-based app that can’t be overlooked. Luckily, with some dedication, this discipline can be mastered even by someone without too much initial experience. Keep in mind: