This is an excerpt of my upcoming ebook Laravel Testing 101. If you haven’t read the previous chapters yet (available for free here: Adding Tests to your Laravel CRUD Application: Where to Start? and here: What should we be testing in a [laravel] CRUD application?), please do so before reading this one.

Now that we have a better idea about the functionalities we should be testing in our Laravel application, let’s start with testing what a guest can do, since it is less complicated than what a logged in user can do.

As we discussed I the previous chapter, here are the functionalities related to guests that we have in the application:

Make sure that PHPUnit is working properly with your application

Before we start writing any tests, let’s make sure that PHPUnit is working properly with your application.

The binary of PHPUnit is included in vendor/bin/phpunit in your project, so all you need to do is to execute it (from your project directory).

You should see this result:

Even though we haven’t written any tests yet, Laravel includes the following example tests:

P.S.: I recommend adding an alias for the command above, so you would not need to type vendor/bin/phpunit each time you want to run the tests

For example, I’m using this alias:

1/ A guest could see all the articles when visiting /articles

Since we are going to test functionalities related to the ArticleController, let’s first create a class dedicated to this controller.

Note that I didn’t pass the --unit flag to the command, which mean we are not creating a unit test but rather a feature test. The newly created class should be located in /tests/Feature/ArticleControllerTest.php

You can get rid of the testExample that was included with the ArticleControllerTest.

When executing PHPUnit, it will look for all the public method that either start with test or that have @test in their dockblock.

So you could either use this format:

I prefer the second one since it is much easier to read.

I’ll start with the most basic test. I just want to make sure whenever I hit the /articles route, I get a valid page back.

Save the file and run PHPUnit (either using vendor/bin/phpunit or with the lphpunit alias we created earlier).

Note that, even though we wrote just one test and one assertion PHPUnit tells us that we have 3 tests and 3 assertions.

Note: An assertion is testing one single “thing”, a test could
contain multiple assertions. The test we wrote above contains just a
single assertion $response->assertSuccessful();

The reason behind this, is that PHPUnit will run all the tests in the /tests directory. Running all the tests each time is not a problem at the stage we are in right now, but if you want to run just a single test, you can pass the name of the test (the name of the method) as a parameter to the --filter flag like this:
lphpunit --filter=it_allows_anyone_to_see_list_all_articles

… and yes, as you might have guessed it you could add an alias for this command in order to save time next time you want to run just a single test.

As you can tell, we want to test more than just getting a valid page, we want to make sure that we are getting the right page.

We can test this with the following steps:

Laravel provides two method to test the above:

Now that we can test that we are getting the right view (with the right variable), we no longer need to keep the first assertion, since it is implicit.

2/ A guest could see a single article

Now that we tested that a guest user could see the list of all articles, let’s make sure that she could view individual articles as well.

In order to ensure that this functionality (showing individual articles to guest users) works as expected, we would need the following steps:

Note:
We can access the returned view thought the $response->original variable

You might ask why we are doing all these steps for a such simple feature. The feature is indeed simple, and its tests are simple as well… simple, but not trivial.

We are doing all these steps to insure the following:

3/ A guest could see a user profile

This one should look a lot like the previous test since the concept is the same (access a model and return it), but we are accessing a user instead of an article.
Since we are not testing articles here, we should create a new test class first:

Then all what we need to do is to add the following test:

This one (and the remaining ones in this chapter) are much simpler, since they do not require accessing the DB.

In order to test this functionality, we need the following steps:

These two tests are even simpler to write, since we are just checking that when we attempt to visit the login and signup page, we get valid pages. Since we are using the Laravel built-in authentication controller, we would not need to test the authentication ourselves.

We would need a new test class for these two tests as well. We could either create a dedicated class just for them. Usually I put all the “page tests” (i.e tests that ensure we are getting valid pages when we hit certain URL) in a PagesControllerTest (especially if I have a controller named PagesController) ; or just create a test class for HomeController since in most cases I add the logic of the pages I tests to this class.

Also, instead of just checking whether we are getting a valid page (which is more than enough in this situation), we also check that we are getting the right views like this:

How would tests detect breaking changes in the code base?

As we discussed in a previous chapter, one goal for writing tests is to ensure that the functionalities of the application will keep working the way we intended when we first built them.

I’d like to show just one quick example of how the tests will inform us that we are introducing a new code that is changing the behavior of the application (a breaking change).

Let’s assume that after a few weeks of working on this application we decided for some reason to update the constructor of the ArticleController from this:

the only change is deleting ->only('create') from the second line of the constructor.

This might either happen by accident (a teammate didn’t see the value of protecting just one action with this middleware) or it was done intentionally to prevent guest users from reading articles before signing in.

If we run the tests, we would get this: 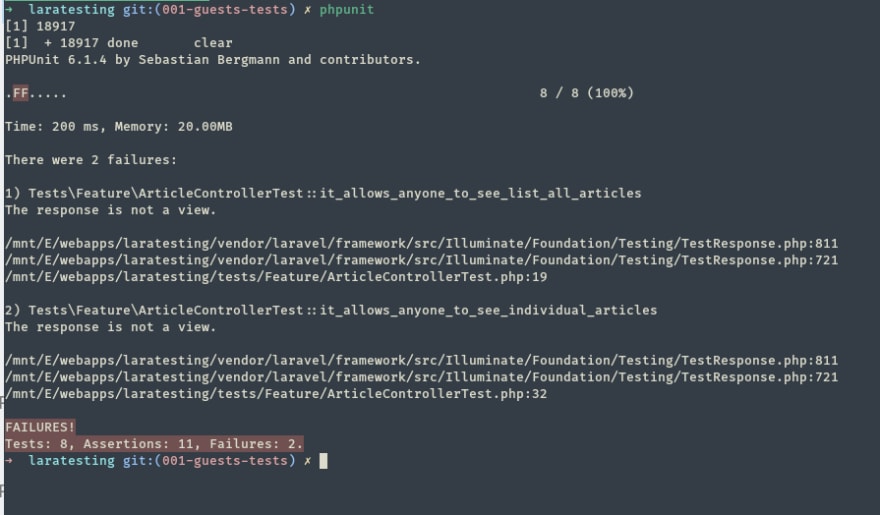 But with the tests, any breaking change will be detected right away without even needing to test the application manually. And if you have a CI (Continuous Integration) set up with your project (we will be exploring how to set it up later in this ebook), you wouldn’t even be able to merge/deploy without fixing the issue first.

In this chapter, we explored the different steps needed to test guest users functionalities. We’ve seen that even though the tests are simple, they sometimes require multiple steps to ensure that we are testing the right thing, and we are not missing some edge cases (especially when we introduce a change that might break the application). We've also seen how tests would detect breaking changes in the code base.

In the upcoming chapters, we will be exploring tests related to logged in users which could be a little more challenging than the tests we’ve seen so far.

If you want to follow along, and get notified of any progress with this ebook (new free chapters for instance), please sign up here: https://laraveltesting101.com/

How to login with magic link in LARAVEL 9?

Youghourta Benali
Back-end developer (PHP / Laravel)
The Laravel Testing 101 ebook is launched and ready!
#laravel #testing #ebook
How to set up your local projects to contribute to Laravel (or any PHP library) : a practical guide
#laravel #git #github #php
What should we be testing in a [laravel] CRUD application?
#laravel #testing #crud

Once suspended, djug will not be able to comment or publish posts until their suspension is removed.

Once unsuspended, djug will be able to comment and publish posts again.

Once unpublished, all posts by djug will become hidden and only accessible to themselves.

If djug is not suspended, they can still re-publish their posts from their dashboard.

Once unpublished, this post will become invisible to the public and only accessible to Youghourta Benali.

Thanks for keeping DEV Community 👩‍💻👨‍💻 safe. Here is what you can do to flag djug:

Unflagging djug will restore default visibility to their posts.