In the following article I will present you what tools I am using during my day-to-day development workflow.
Also, I will show you a list of extensions and their purpose that will help me and probably you too being more productive.

Both at work and in my free time I am working on an Apple MacBook Pro.
But most of the tools and software listed here is available for Windows, macOS and Linux distributions.

Let's get started with some basic software that I use.

The default Terminal app for macOS fulfills its purpose but for being more productive I can recommend the alternative terminal applications Tabby and iTerm2.

I used iTerm2 for a long time and it's a great tool with lots of configuration options.
You can create tabs, use profiles and customize styles and layouts.

However, a few weeks ago I switched from iTerm2 to Tabby (formerly Terminus).
Tabby is a quite new terminal app and it's Open Source!
Behind the scenes it's an Electron App using Angular.
You can also customize it a lot.
A feature I like particularly is that you can define SSH and Serial Port profiles.
You can then later activate those profiles so that you can access an SSH remote host or a serial port without entering anything manually in the terminal.

If you are on a Mac, you probably know Homebrew – the package manager for macOS.
If you don't know Homebrew: You should definitely check it out.
Personally I prefer to install most of my Software via Homebrew as I can easily manage updates later without having to manually download the packages.
However, since I don't remember all Homebrew commands all the time and to get an overview of the installed packages, I use a Homebrew GUI called CakeBrew.
This lets me easily update and manage my installed Homebrew packages. 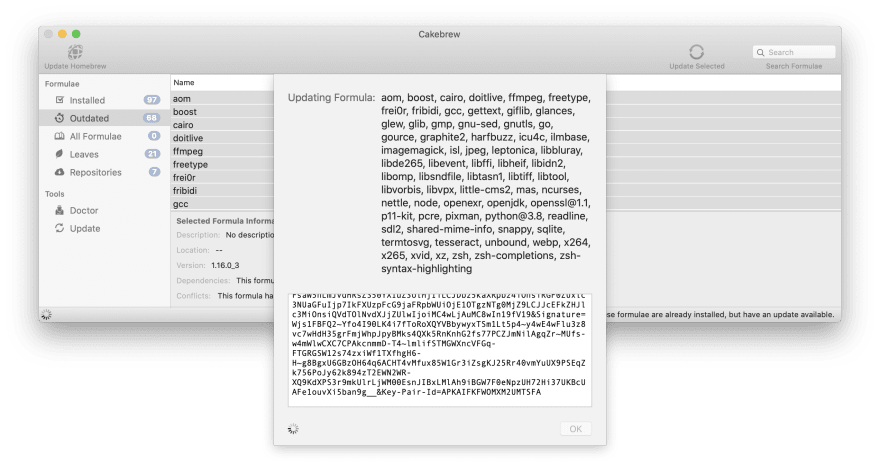 Working on multiple projects requires sometimes different environments.
As a web developer Node.js is essential and should always be up-to-date but sometimes you need to use different versions of Node.js and NPM for different projects.
NVM (Node Version Manager) let's you easily install and switch between multiple Node.js Versions.
My recommendation is also to check-in the .nvmrc file in every project to help other team members to use the right version of Node.js automatically.

As a developer, version control with Git is essential for your development workflow.
Personally I do all of the basic operations via the command line, like creating commits, adding files to the staging area, pulling and pushing.
However, there are some things where I prefer to use a GUI for assistance:

Fork is a very nice, clean and powerful Git GUI that helps you to control Git in an easy and interactive way.

In the last years, Microsoft has improved its free IDE Visual Studio Code a lot, and with every frequent release it gets even more powerful.
One of the things that makes VSCode such a great IDE is the wide range of available extensions and plugins.
VSCode is a very universal and adoptable IDE which has great support and tools for lots of programming languages.
So it doesn't matter if you develop a web application, a mobile app using e.g. Flutter, a C# or a Python app: You can use VSCode for all of that and you don't need to get start using a new specific IDE for each and every specific language. 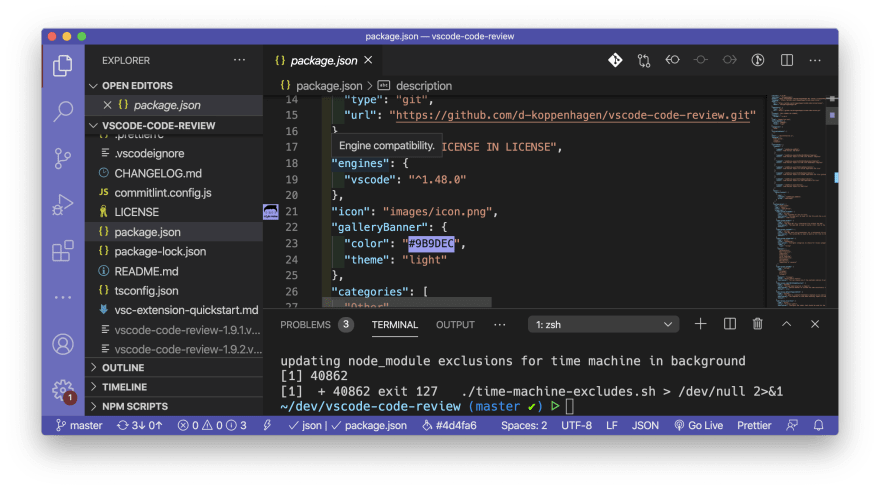 Later in this article, I will present you a list of my favorite extensions for VSCode.

As a web developer, a modern browser like Google Chrome is essential.
In my opinion the developer and debugging tools are more mature compared to Firefox.
Chrome is also very up-to-date in terms of the latest JavaScript features and it has a wide range of extensions you can install that will help you to even be more productive developing web applications. 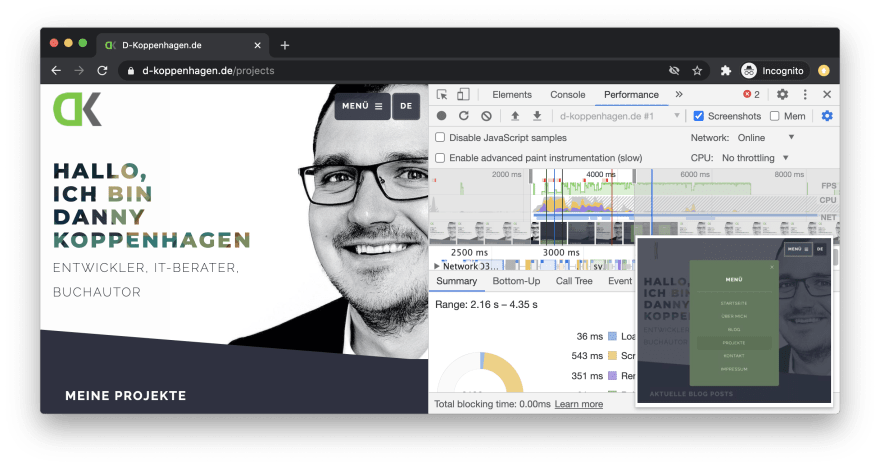 A list of my favorite extensions for Google Chrome can be found further down in this article.

Insomnia is a great and simple tools that's very easy to use when you want to interact with REST or GraphQL endpoints. It has a very simple UI but it's powerful nonetheless.
You can call endpoints, check their responses and also create batch requests or save your requests for using them later again.
I personally prefer Insomnia over Postman which I used before and which is also very powerful.
However, in my opinion the UI of Postman got a bit confusing during the last years by introducing new features.

From time to time as a developer you need to illustrate things and flows.
For this, I mostly use draw.io. It's available as a web application but also as an installable desktop version.
Draw.io provides a lot of basic icons and vector graphics for network illustrations, UML, diagrams, engineering icons for circuits and much more. 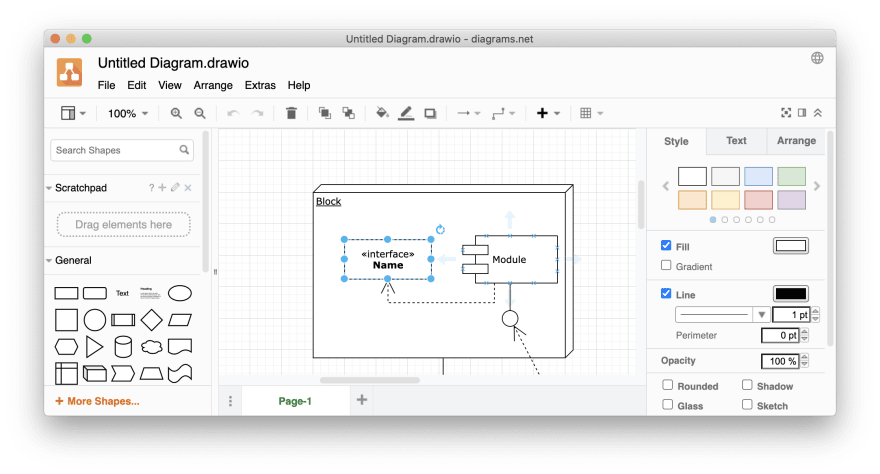 When I develop extensions for VSCode or other tools I always give my best to present users how to use these tools.
The best way to present things is in a visual way as a screenshot or a GIF / video screencast.
This supplements the textual description and thus, can be processed more easily by users.
RecordIt lets you record your screen and create small screencasts that can be shared via a simple URL as a video or GIF.

Recording screencasts can be supplemented by displaying the keys you are pressing during the recording.
This is a great way to present keyboard shortcuts without having to manually explain which keys you're using.
For that purpose I use the tool KeyCastr.

Since Visual Studio Code Version 1.48.0 the Feature Settings Sync became stable and available for everyone.
This feature allows you to sync your settings between different installations of VSCode using your Microsoft or GitHub account.
When you've installed VSCode on multiple machines and you always want to have the instances in sync, you should definitely set up this feature.

The next part is all about the VSCode extensions I am using so let's walk quickly over the plugins I've installed on my VSCode instances:

Google Chrome is great and it already brings a lot of possibilities that help developers to improve their web apps.
However, there are some really great plugins I am using that I can recommend:

Scripts and other tools

Personally, I like to keep my Mac up-to-date and therefore I will install most of my software via the Homebrew package manager.
Also, to be more efficient I use the oh-my-zsh framework for managing my shell configuration.
Most of my configurations is also published in my GitHub repository called .dotfiles.

Exclude all node_modules from TimeMachine backups (macOS only)

One thing I learned during my career is: backup, backup, backup.
It's better to have one more backup than data loss.
Fortunately, on a macOS system it's possible to set up Apple's TimeMachine for creating continuous system backups.
However, backing up everything takes a lot of time and there are things you don't need to back up like directories syncing with a cloud provider like Dropbox, Sharepoint, etc.
Those directories can easily be excluded from the TimeMachine backup by configuration.
This will keep the backups smaller and also in case of a restore, the system ready to use after a much shorter time.
But what about node_modules directories?
For sure: You can exclude them in the same way, but this is very sophisticated and you always need to remember this step once you create a new project.
Therefore, I am using a simple script.
It looks for all node_modules directories in my development directory (~/dev in my case) and excludes them from the backup:

To be sure the script updates the list of excluded directories frequently, I added a cronjob:

The actual cronjob config is the following:

Now as you know my dev setup, it's your turn! Is there any great tool or plugin you can recommend?
Then just contact me via E-Mail or Twitter and let me know!

Special thanks goes to Ferdinand Malcher for revising this article.

Photo by Todd Quackenbush on Unsplash

What you can do using project planning on GitHub

My Time At Flatiron School

Once suspended, dkoppenhagen will not be able to comment or publish posts until their suspension is removed.

Once unsuspended, dkoppenhagen will be able to comment and publish posts again.

Once unpublished, all posts by dkoppenhagen will become hidden and only accessible to themselves.

If dkoppenhagen is not suspended, they can still re-publish their posts from their dashboard.

Once unpublished, this post will become invisible to the public and only accessible to Danny Koppenhagen.

Thanks for keeping DEV Community 👩‍💻👨‍💻 safe. Here is what you can do to flag dkoppenhagen:

Unflagging dkoppenhagen will restore default visibility to their posts.