TL;DR: vim-ale is awesome and you should give a try!

Introduction: the rise of linters

I've already blogged about linters and how I use them when I write Python code.

Note that the script runs the fast linters first (pycodestyle and pyflakes are pretty fast), and ends by running pylint, which can get pretty slow on big code bases.

This works quite well for me when I'm using Python because:

But some time ago at work, we all start working on some Javascript code.

We use eslint for code style, flow for type checking, and mocha plus chai for tests.

And since we're using GitLab for hosting our source code, we of course have a .gitlab-ci.yml file to run all of these for each merge request.

Shortcomings of the makeprg approach

At first I tried using the same work flow as with Python, but I quickly face some issues.

Finding the binaries to run

Knowing which binary to use for the linting program can be hard. Sometimes you can use the one that is in your $PATH, but sometimes you want the binary that is in node_modules/.bin

Our eslint configuration is quite strict. (It's based on the one from Air B&B if you're curious), and I'm not used to Javascript yet, so I constantly had style issues and it was frustrating to have my merge requests blocked because I forgot to run :make and had a bunch of style problems.

For Neovim to populate the quickfix window, it has to parse the output of the linters programs.

It's very pretty (and I did not even show you the nice colors!), but you can see it's a bit hard to parse for other programs. 1

The solution is to use the --format option like this:

But by default Neovim expects an output exactly like gcc2

It's pretty hard to get right, even if you read the documentation (chapter 7, the "The Error Format")

Last but not least, all the linters ran quite fast (even flow, because it uses a background server under the hood).

So it was also painful to have the editor unresponsive for the few seconds it took for all the linters to run.

After hearing good things about vim-ale, I decided to give it a try, and I was very pleased to notice it was able to run eslint and flow in our Javascript project with zero configuration!

This is how vim-ale works by default: 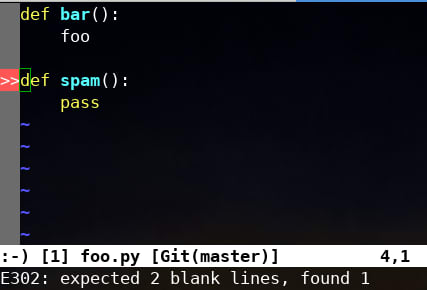 Notice the red angle brackets in the column on the left, and the detailed message on the bottom.

Also, by default the whole gutter will disappear when there’s nothing found by the linters, which allows you to instantly know you’re done fixing lint errors.

After reading vim-ale documentation, I was able to tweak a few details:

I prefer having the linters run only after I save the file, not continuously, otherwise I find it too distracting:

I also don't like the linters to run right after I open a file:

By default, vim-ale uses the so called location list. It looks pretty much like the quickfix window, but:

At first I was tempted to configure vim-ale to use the quickfix window instead (which can be done by setting the g:ale_set_quickfix variable), as I was doing for Python, but I've decided to try and let vim-ale use the location list for several reasons:

I was already used to type :cp, :cn and :cr (:cprevious, :cnext and :crewind) to navigate the quickfix list, but it turned out it was harder to use their location list counterparts:

Now, Neovim has this concept of "leader" key you can use to prefix all your custom mappings.

I'm using "comma" for this, instead of the default (backslash), that I find hard to type.

So of course I could have used a <leader> mapping for the location list command, but it unfortunately <leader>p, <leader>n, and <leader>r were already taken.

That's when I remember someone suggesting using "space" as a leader key, and so I used:

Note: this means I can no longer easily use the space bar in normal mode, but by default all the space key does in move the cursor forward, so it's not a big deal.

As I describer earlier, vim-ale is pretty smart, and comes pre-configured with the pylint and pyflake linters.

This means that every time I was saving code in a Python file, vim-ale would find pylint and flake in the virtualenv or in the PATH, and run them with the default options.

It's not what I wanted, but it was easy to turn in off:

(Configuration of the ale_linters dictionary is a bit weird: it assumes you want to run all the linters for every filetype, so you have to define some kind of "blacklist" to turn off the linters you don't want to run)

But by then I started to miss having the style being checked after each save.

(This is what happens when you start using great tools: you wish you can use them all the time 4)

Unfortunately, vim-ale did not know about pycodestyle so I had to patch the code of the plug-in.

In our case the pycodestyle output looks like this:

There's the filename, the line, the column, a short code (E302 in the example), and a detailed message (expected 2 blank lines, found 1)

So I started adding a new file in code in ale_linters/python/pycodestyle.vim

Here are the relevant parts:

You'll notice everything is done with callbacks to get the path to the
executable, the full command line, and how to parse the output.

And here's the implementation of the pycodestyle output parser.

You'll note it's done by writing "real" code (it's still vimscript, though) with helpers functions, instead of trying to set a weird errorformat option, with hard to read syntax.

And that's all there is to it. All I had to do was to set the ale_linters dictionary to only run pycodestyle:

and then I could keep using :make and the quickfix window for the slower linters like pylint like I used to :)

vim-ale requires very little configuration to work out of the box. The asynchronous features are really nice (and they work both in Neovim and Vim 8).
It has tons of customization options, and last but not least, new linters are easy to add and customize.

I highly recommend you give it a try.

Thanks for reading this far :)

I'd love to hear what you have to say, so please feel free to leave a comment below, or read the feedback page for more ways to get in touch with me.

Get started with Next.js + Fauna GraphQL in 5 minutes

Hi everyone! Happy to be here on DEV ❤️. I completed the HACTOBERFEST challenge