... at least when it comes to Markdown files ;)

Introduction: editing this blog in Neovim

Here’s what it used to look like to edit one of my articles in Neovim: 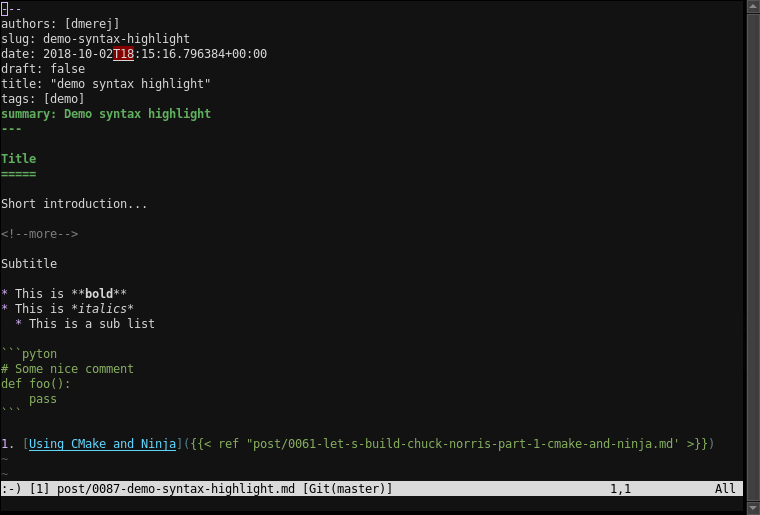 Take a quick look. Do you see what’s wrong?

For quite some time I did not think to much about this situation, until I read A case against syntax highlighting, by Linus Åkesson.

So one day I decided to try to turn the syntax highlighting off: 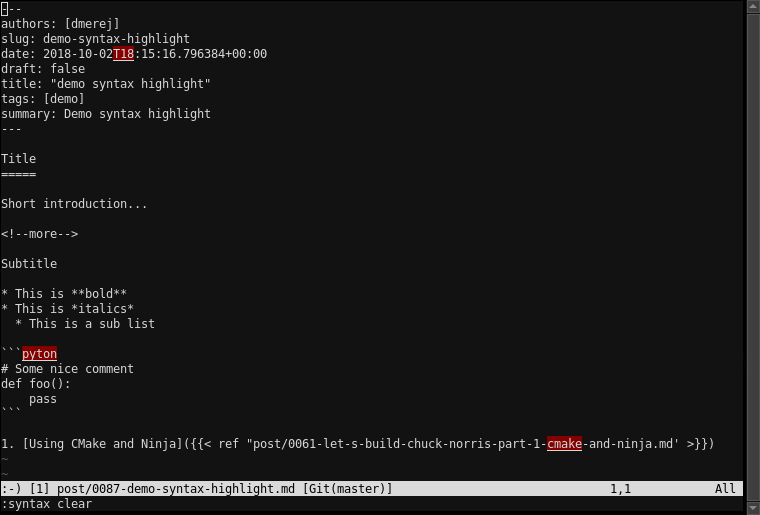 One more thing: I’m also viewing the rendered HTML in a browser next to my Neovim window. Hugo rebuilds the page I’m editing after each save, and the browser automatically reloads.

This has several consequences:

So let’s think about what we learned:

So, why do we keep using it?

For now, I’m just turning syntax off for Markdown files. Here’s the relevant section in my init.vim file:

I’m still using syntax highlight in the other cases.

5 Minutes Vim: Copying, Cutting, Pasting, Registers, and How to Tame Them

(n)Vim shortcuts for the lazy

Trending on DEV
Feb. 21, 2020: What did you learn this week?
#weeklylearn #discuss #weeklyretro
3 Things to Improve Your Productivity
#productivity #terminal #timer #autocomplete
How to Become a Senior Developer
#webdev #beginners #career
I never deploy on Fridays, but when I do...
#devops #discuss
How The DEV Community transformed my Career ?
#career #codenewbie #motivation #webdev
What is the best Javascript Stack to choose in 2020 ?
#discuss
How is GraphQL different from the old days?
#discuss #graphql #restful #webdev
How I Got Started Developing Games
#career #womenintech