We all learn newer techniques everyday. I wrote a post couple of weeks ago on how to add sequential numbers to the beginning of data file (lets say a CSV file) using sed command in Linux. You can check that post here: 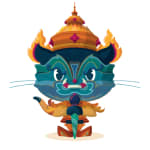 Bash: How to add sequential numbers to the beginning of each line using sed?

It was observed that the technique was not quite optimized for files with millions of lines as it uses for loop and go through line by line to insert sequential numbers.

Recently I explored seq and paste Linux commands and I was amazed how effectively we can accomplish our desired target without using any for loop or manipulating the data file line by line.

Lets dive in to see how we can leverage these two commands.

We can redirect the output of the command to a file, say, serial.

The second command we are going to explore is paste. The command uses two or more files to produce an output separated by whitespace in columns.

and a serial file with the following numbers

Lets use paste command on serial and cities files.

As we can see the output is separated by a whitespace. We will see how we can modify the delimiter shortly.

Lets put 2 commands together to accomplish our target.

Suppose we have a CSV file mock.csv with the following content

and we wish to add sequential numbers to the beginning of the file. Here is the final bash script.

Viola!!! That was simple and elegant. Note that we have used -d, option with paste to indicate the delimiter to be , rather than a whitespace.

Note that we have hard coded 5 as an argument to seq command because we know beforehand that mock.csv contains 5 rows. What if we don't know the number of rows in the CSV file? Simply use wc -l command and extract the number of lines using awk or cut.

I hope it will help you. Keep Coding!

How To Make Your Ubuntu Desktop Faster