Originally posted in my blog. 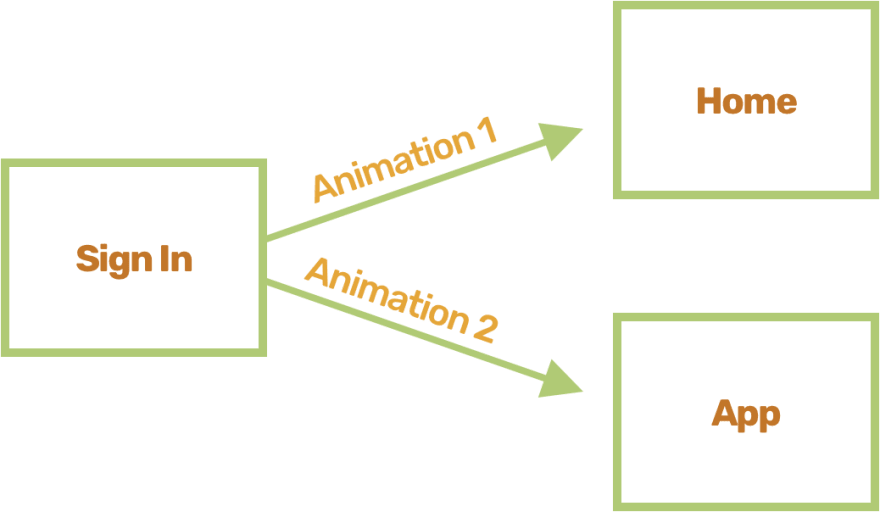 I ended up with a pretty neat Provider-and-hook duo that works nice with the popular React Router, so I thought I'd package it up nicely and share it.

So react-route-transition is the outcome of that weekend's work.

The way it works is dead simple.

It exports a Provider you need to wrap your app with (place it inside of react-router's Router).

The two hooks provided by react-route-transition (useTransition() and useTransitionHistory()) will later read from and write to that context.

After wrapping your app with it, you can declare how your animations behave. To do so, you call the useTransition() hook.

useTransition() accepts an object the has a key named handlers whose value is an array of Handlers.

A Handler is an object that describes:

A Handler object is comprised of the following keys:

Here's an example of usage of useTransition():

When the component that called useTransition() unmounts, the handlers it registered are also removed, so pages no longer in view will not start animations in the background.

Now, if you're unfamiliar with gsap, it's an old school animation library from the 00's which is still really nice. A great, light-weight alternative is anime.js. They both expose simple APIs that make animating the DOM a breeze and (IMO) a lot more readable than declarative ones (see my disclaimer below).

Awaiting gsap.timeline().to() means waiting for the animation to complete (its return value is then-able and resolves once it's done animating).

We are now ready to see the animation play.

Starting Up An Animation

react-route-transition handles navigating for you. It exports a hook named useTransitionHistory() that accepts the path you want to navigate to. That hook orchestrates the animations. It goes over the list of registered handlers, finds which ones describe an onLeave animation for the current location, fires up all these animations simultaneously, waits for them to complete and then calls history.push (react-router's), this causes new components to mount and register their handlers (that may or may not describe onEnter animations for this new view). Finally, it fires up all the onEnter animations for the new location.

You can do it by passing a from and a to options, instead of a passing the path option, for example:

Lastly, path, from and to also accept an array of paths. That's useful when you want the same animation to be fired when navigating to (or from) multiple pages.

Personally, I don't like writing complex animations in a declarative manner. They're great for interactions, but I find that compared to animations written in an imperative way, the learning curve is steep, code readability suffers and playing around (just testing stuff out) is not as fun as the feedback loop tends to be longer. That may be because I started my way out as a Flash (ActionScript) developer, where tween animations were very popular, so don't take this as a fact. If you prefer the declarative approach keep at it and please let me know in the comments below, I'd love to hear about their upsides!

Once suspended, dutzi will not be able to comment or publish posts until their suspension is removed.

Once unsuspended, dutzi will be able to comment and publish posts again.

Once unpublished, all posts by dutzi will become hidden and only accessible to themselves.

If dutzi is not suspended, they can still re-publish their posts from their dashboard.

Once unpublished, this post will become invisible to the public and only accessible to Eldad Bercovici.

Thanks for keeping DEV Community 👩‍💻👨‍💻 safe. Here is what you can do to flag dutzi:

Unflagging dutzi will restore default visibility to their posts.