I am writing this to announce a lame, but hopefully fruitful confession through this post. I had originally intended to make this a Twitter thread, but eventually the Rust 2020 call for posts emerged, and I saw it as an opportunity to expand this.

It's not that much of a surprise when I say that there is a time and place for everything. Even a community in tech, such as the Rust community, may not only be concerned about the next generation of software, but may also be interested in establishing grounds for creativity and room for inside jokes. One day, while writing .map(|_| ()), I realised how the closure inside looked like a toilet rotated 90 degrees counter-clockwise. So I tweeted this in May 2017, and started using the expression since.

On the other hand, most of those who already knew about the toilet closure might have seen it from Reddit, around June 2018. Yup, that was also me. Memes will slowly and softly deduct my sanity. 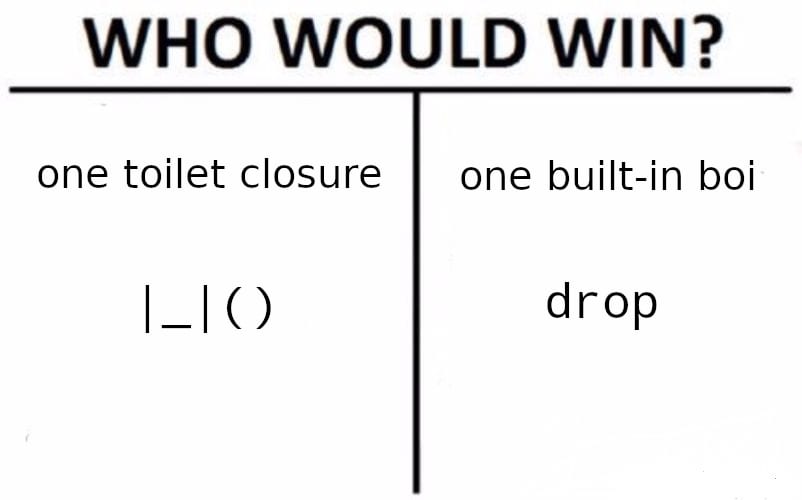 And yet this toilet is as pertinent in Rust code as it was 2 years ago, perhaps even more due to the latest advances in asynchronous programming with Rust. And it is very often preferred over drop.

"rust programmers hyperfocus on ergonomics" untrue; the toilet closure "|_| ()" is six characters, all of which use the shift key, while the equivalent named function "drop" is four characters with no shift

So yes, I was likely the one who coined "toilet closure". Although I agree we should be grabbing our leads tighter ("less jargon", as suggested by Llogiq), this process is almost organic and not entirely avoidable on the behalf of a community presenting superior levels of enthusiasm.

Nonetheless,the part that worries me most is how hard it is to search about these things. We happen to have great technical resources out there, but not for such a jargon as "toilet closure". This one is particularly tricky to search about, as you end up with public plumbing issues instead.

So I came up with this idea of uniting all this jargon, tropes, acronyms, and other expressions into an open-source repository. Rust Tropes intends to be a community-curated list of expressions and concepts which may emerge when talking about Rust or when engaging with other Rustaceans, some of which are not necessarily technical.

This is a work in progress, and I hope to receive some assistance. Feel free to contribute with more content, better styling, and other things. https://github.com/Enet4/rust-tropes
Your assistance in spreading and expanding this source is much appreciated, and it's one of my wishes for Rust 2020 for this resource to have some usefulness to all the confused people out there wondering what pre-pooping your pants is, or why unsafe code attracts laundry connoisseurs.

Also, we could really use GATs.

How to solve the Rust+TLS+Windows Nightmare

Use Restricted std in UEFI

Once suspended, e_net4 will not be able to comment or publish posts until their suspension is removed.

Once unsuspended, e_net4 will be able to comment and publish posts again.

Once unpublished, all posts by e_net4 will become hidden and only accessible to themselves.

If e_net4 is not suspended, they can still re-publish their posts from their dashboard.

Once unpublished, this post will become invisible to the public and only accessible to Eduardo Pinho.

Thanks for keeping DEV Community 👩‍💻👨‍💻 safe. Here is what you can do to flag e_net4:

Unflagging e_net4 will restore default visibility to their posts.