Adding a fingerprint authentication for multiplatform projects have never been easier than with the Plugin.Fingerprint nuget package.

A few things to clarify about biometric/fingerprint authentication. These are implementation limitations by the technology itself and not introduced in any way by the Xamarin Forms implementation:

Now to the main event

To start you want to include the Plugin.Fingerprint into all your solution projects. 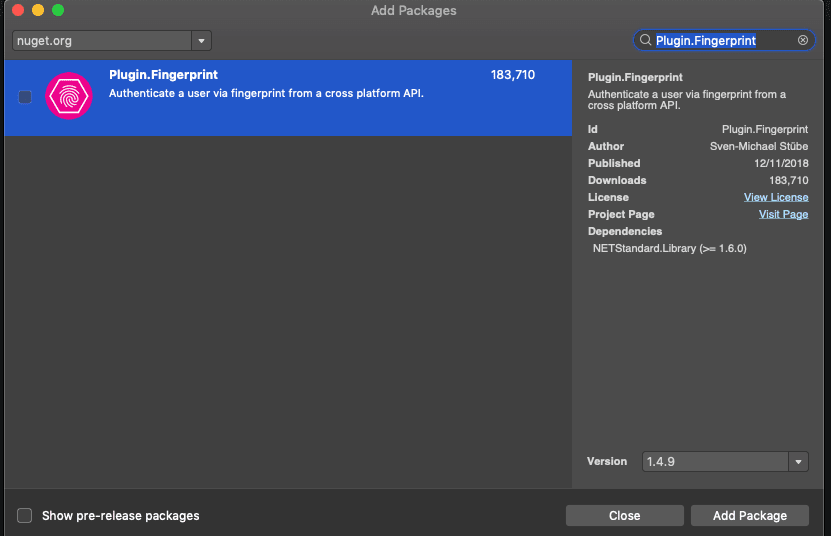 Then you have to do a little bit of setup. Don’t be scared it’s just three lines for Android and a couple lines for iOS.

After the setup is done you need to call the AuthenticateAsync method. You should pass the text you want the user to see when you ask them to authenticate. The return is a boolean value that indicates whether the fingerprint was of a valid user or the user canceled the dialog. It also returns a false right away if there are no registered fingerprints.

Bonus content: Configuring your emulators and simulators for fingerprint authentication

On the iOS simulator:

On the Android emulator:

I hope you find this useful. I think something like this could be very useful to include in Xamarin.Essentials. From what I’ve gathered they are in plans of adding it but haven’t yet so maybe this is a good chance to do something about it… Anyways, have a good day and if you liked this article I encourage you to share it on social media or fax it to your dad and your mom, they will probably love it, trust me.

What are OAuth 2.0 and OIDC (OpenID Connect)? Step By Step Authorization Code Flow With Endpoints

Once suspended, eatskolnikov will not be able to comment or publish posts until their suspension is removed.

Once unsuspended, eatskolnikov will be able to comment and publish posts again.

Once unpublished, all posts by eatskolnikov will become hidden and only accessible to themselves.

If eatskolnikov is not suspended, they can still re-publish their posts from their dashboard.

Once unpublished, this post will become invisible to the public and only accessible to Enmanuel Toribio.

Thanks for keeping DEV Community 👩‍💻👨‍💻 safe. Here is what you can do to flag eatskolnikov:

Unflagging eatskolnikov will restore default visibility to their posts.