With the release of Xamarin.Forms 4.1 arrives a new Checkbox control. Here is what it looks like:

Image was taken straight from the documentation https://docs.microsoft.com/en-us/xamarin/xamarin-forms/user-interface/checkbox

The Checkbox has a bindable property for the checked status (IsChecked) and you can handle the CheckedChanged event too.

The control has a rounded shape on iOS if you want it to have a square shape you can use the Visual API.

For now, the CheckBox control doesn’t include a Text property and it doesn’t render a Label next to it, to achieve this you would need to explicitly include a Label control and align it next to it.

If you’re working on a legacy project or, for whatever reason, you are not able to update to Xamarin.Forms 4.1 but you are still looking to include a CheckBox here are a couple of options for you:

Like most third-party libraries in the Xamarin Ecosystem, it is very easy to set up and gives you access to a healthy variety of controls. We will focus on the Checkbox functionality, for now. I may write about the complete library on a later entry.

To set up the library just do as follows:

To create a checkbox you would write something like this:

As mentioned before, this library has been around for some time some it includes a few more things than the new Xamarin Forms native Checkbox like the ability to include the checkbox’s label text and the type of checkbox you want to render. These are the different types: 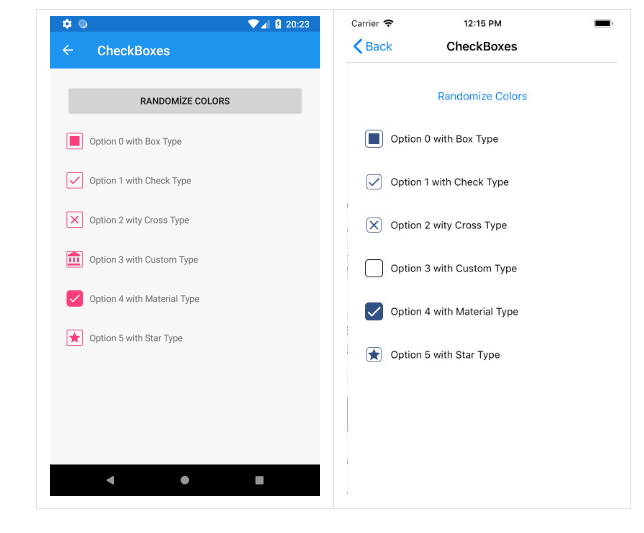 Image was taken straight from the repository https://github.com/enisn/Xamarin.Forms.InputKit

I wrote a sample project here if you want to check it out https://github.com/eatskolnikov/CheckBoxSample

And that’s all folks, as always, I hope this information has been of use to you and if you liked it feel free to share it with your peers and check the other posts. Thanks, Bye!

Once suspended, eatskolnikov will not be able to comment or publish posts until their suspension is removed.

Once unsuspended, eatskolnikov will be able to comment and publish posts again.

Once unpublished, all posts by eatskolnikov will become hidden and only accessible to themselves.

If eatskolnikov is not suspended, they can still re-publish their posts from their dashboard.

Once unpublished, this post will become invisible to the public and only accessible to Enmanuel Toribio.

Thanks for keeping DEV Community 👩‍💻👨‍💻 safe. Here is what you can do to flag eatskolnikov:

Unflagging eatskolnikov will restore default visibility to their posts.