I've been spending about two days scouring the net on trying to find the optimal way to integrate Sapper with Firebase. It's not as easy as it sounds.

Sapper is a framework for building extremely high-performance web apps. It is a compiler actually. All your code gets built and optimized ready for production.

It's built on Svelte.js. Sapper has many cool features and I recommend you check the docs out Sapper. The Framework allows for SSR capabilities, but can also generate a static site with npm run export.

Firebase is Google's platform for "Building apps fast, without managing infrastructure". Basically, in a few commands you can have your static site hosted, hooked up to a database and have authentication readily available.

Other than static sites, Firebase also explores the realm of "serverless" by way of "Functions". These are basically small pieces of logic that you can call either from your app, or when some sort of update in terms of authentication or database occurs.

Functions are useful for:

Why the combination of Firebase x Sapper?

Firebase development is really fast and easy, so is Sapper's. I thought: "Why not best of both worlds?". I can have all the niceties of Firebase authentication, database and CDN hosting - along with the speed of development, size of app and general awesomeness of Sapper.

First, we'll need to install the necessary dependencies. (I'm assuming that you already have Node.js version >= 10.15.3 and the accommodating NPM version on your system).

Sapper uses a tool called degit, which we can use via npx:

Adding firebase to the project

Before the next step:

You need to go to Firebase and log in to a console. Here you have to create a new Firebase project. When the project is created, on the home page click the </> button to add a new web-app. Name it whatever you like.

Now we can proceed.

This will return a screen where you can select new project:

Then let your functions dependencies install.

The goal we want to achieve by changing the firebase.json is to:

The rewrite is checking for requests under any route, and basically letting the function named 'ssr' handle it.

Edit: I'm afraid there's more.. Recently an error pops up if the firebase-admin dependency in functions/package.json is greater than 7, so just set it to:

So let's create the 'ssr' function:

This is only temporary so we can test our function. We can do so by running:

if you get this message:

You can go to functions/package.json and set:

Other than that, after running firebase serve and going to http://localhost:5000, you should see this: 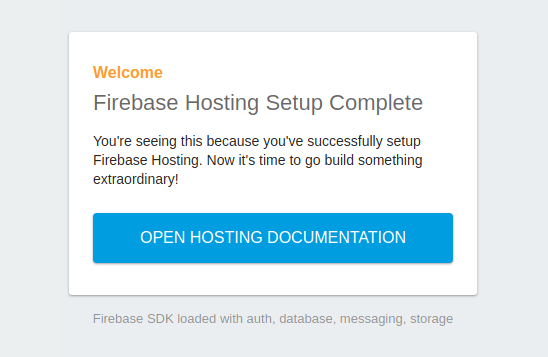 We're seeing that because Firebase created an index.html file in our static floder. We can safely delete it and we can go to http://localhost:5000/ and should now see:

Now that we've proven our function to work and redirect requests, we need to mess with Sapper a bit, to get our function to run our server. Let's start off by editing the src/server.js file, our goals are:

We can test if npm run dev works by letting it build and visit http://localhost:3000. It should show a picture of Borat (Standard Sapper humor).

But this is still only our Sapper server, we want to run it from our Firebase function. First we need to install express:

Note: 'sirv' 'compression' and 'polka' are required, because of the built directory that depends on it. We'll only use express in our function though. But if we exclude the others, our function will fail on deploy.

After installing express and the other dependencies, we first want to tweak our workflow to build a copy of the project into functions. We can do this by editing the npm scripts:

Windows users: please use the guide at the end of the post for your scripts

This will copy all the necesarry files to the functions folder before hosting or serving them locally.

You should see the message from earlier!

Serving our Sapper app via Functions and express

We can plug an express app into our function, use our imported Sapper middleware on express and serve our SSR app seemlessly. The static folder is also being served via the very fast Firebase CDN.

All you have to do now is: 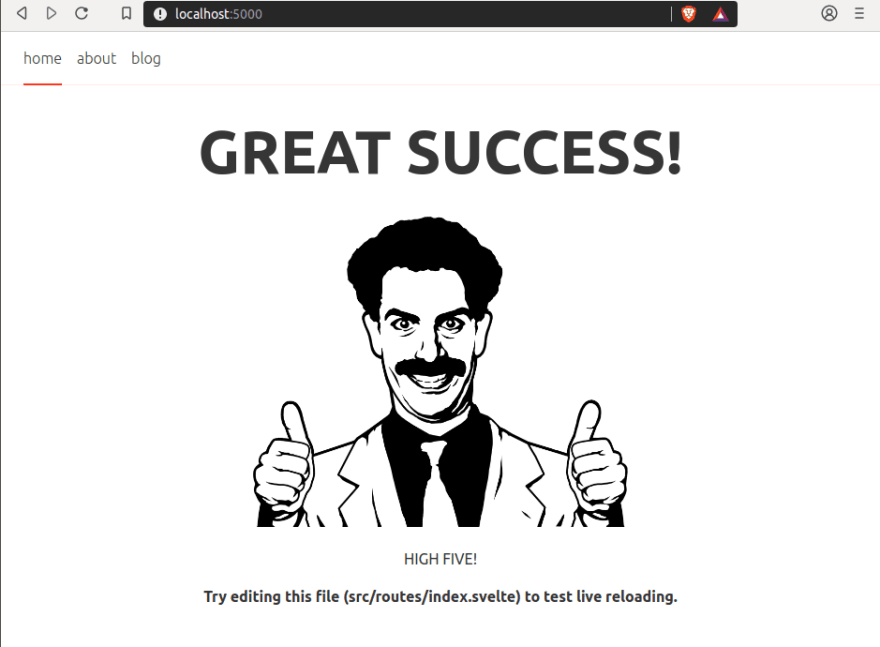 If you see this image on http://localhost:5000 your app is being served by a local firebase functions emulator!

To confirm that it is SSR, just reload a page and check the page source, all the markup should be prerenderd on initial load. Also check out your terminal, you should see all kinds of requests as you navigate your app!

Because of our neat NPM scripts hosting/deploying is as easy as:

This will take a while, to get your files and functions up. But here's my version online SSRing like a boss.

You will need to do some extra stuff to get this working...

The -D flag adds it to dev dependencies, since that's where we need it. Change your scripts to this:

These solutions are hacky and this post might bite me in the future due to rapid changes in sapper and firebase stuff. Thank you to Diogio Marques for requesting this in comments.

This is one of my first posts that I actually feel could help someone out, since it took me hours to figure out (Maybe I'm just slow). But I typed it out since I can't make videos on my Youtube Channel, because of time issues.

But if you did enjoy this, or have questions, chat to me on twitter @eckhardtdreyer. Until next time.

Once suspended, eckhardtd will not be able to comment or publish posts until their suspension is removed.

Once unsuspended, eckhardtd will be able to comment and publish posts again.

Once unpublished, all posts by eckhardtd will become hidden and only accessible to themselves.

If eckhardtd is not suspended, they can still re-publish their posts from their dashboard.

Once unpublished, this post will become invisible to the public and only accessible to Eckhardt.