I love shortcuts. If I had to pick the most impactful invention in human history, it would be Ctrl+C and Ctrl+V. We would still be living in caves if we didn't find ways to make our lives easier.

Living in caves is what I felt about using the Terminal for a long time. Everything was so hard but felt so... magical at the same time. One day, I got tired of repeatedly bashing my keyboard in, putting down my club, learned Bash, and made my first script.

Now, dear reader, gather around the fire (figuratively, of course), and let me tell you about my approach to writing a Bash script for shortcuts that got me from the stone age to 2021.

(*) The commands you see in this post are executed on a Mac. If you are using Windows or Linux, you may have to adjust the commands slightly.

Bash is a command language that allows users to type in text commands to tell the computer to do specific actions. Mac and Linux usually come with Bash installed.

If you go to Application > Utilities on a Mac, you will see an app called Terminal

Open the Terminal, and you will see a black window with white texts - kinda like what the hackers use on TV. This is the command-line interface (CLI) that allows you to run text commands (including Bash commands and scripts).

🛠 Starting with the basics

In this case, yarn is the command name, and install is the first parameter. We will want our Bash command to work in a similar way. For us, let's say if we execute the following command, it will open Netflix in the browser:

(*) Executing a command means we type the command into the terminal and press return/enter.

Let's create a new file with the following content:

Normally, if you try to execute the script by typing in the path to the script and hit return/enter, it will say that you don't have permission to do so:

😤 Hmm, I'm a grown-ass man. No one or nothing can "permission denied" me like this. Let's find a way to fix this.

At this point, we could mess around with script permissions but I prefer sourcing the script for many reasons:

You can add the following line at the end of your ~/.zshrc or ~/.bashrc file:

Doing this will load the script into the terminals that you open in the future so you can execute the ss command directly.

Now, open a new terminal, type ss into the command prompt, and hit return/enter, you will see something like this:

Now we get to the fun part! We want to check the parameters that come after the command name and assign them to an action we want to take. For example, we can update the script to something like this:

There's quite a bit to take in here but don't worry, here's how it works:

Try opening a new Bash script and executing the following command and see if it's working:

If it opens Netflix in a new browser, congratulations! You have created your first Bash shortcut script. 🎉

The above commands are pretty simple but you can add more commands in each block. In another script that I use, I start 5-6 web services locally on my laptop with one command. That is, like, 10000% productivity increase.. or something. Yea. 😎

If you enter an invalid command, you will see an error message:

🍕 BONUS - Add pizzazz to your script

Error messages just have bad vibes. If I fail to type a command, I want encouragement from my computer, not getting yelled at! If you feel the same way, update the script to the following:

sayStuff is a function that picks one of the few given quotes to cheer you up every time you enter an invalid shortcut combination. For me, some aggressive positivity is exactly what I want to hear during trying times: 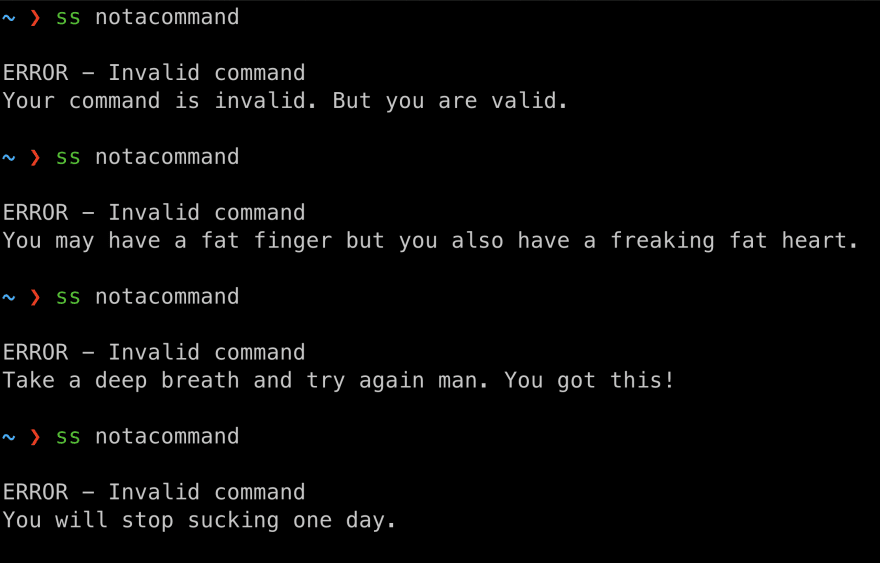 Writing a Bash shortcut script is a fun way to get used to scripting as well as saving yourself from typing too much ( everyone hates that right? ). Do you have other ways that make your daily workflows easier? I would love to hear from you. 🙂

The full code example is available on GitHub: https://github.com/eddeee888/topic-simple-bash

Eddy Nguyen
Hello 👋 I love to talk tech, especially in React, GraphQL, and TypeScript.
10 of the coolest developer T-shirts from devshirt.club
#watercooler #codenewbie #career #writing
5 Life-Changing Lessons I Learned From Being Laid Off That Will Put You Ahead Of 97% Of People
#beginners #productivity #motivation #codenewbie
Always over estimate effort
#discuss #devrel #productivity

Once suspended, eddeee888 will not be able to comment or publish posts until their suspension is removed.

Once unsuspended, eddeee888 will be able to comment and publish posts again.

Once unpublished, all posts by eddeee888 will become hidden and only accessible to themselves.

If eddeee888 is not suspended, they can still re-publish their posts from their dashboard.

Once unpublished, this post will become invisible to the public and only accessible to Eddy Nguyen.

Thanks for keeping DEV Community 👩‍💻👨‍💻 safe. Here is what you can do to flag eddeee888:

Unflagging eddeee888 will restore default visibility to their posts.