This article was written by Aaron Xie and was originally published at Educative.

What is competitive programming?

Competitive programming is a sport, perhaps even a form of art. It’s an activity that requires creativity and analytical thinking to tackle difficult coding problems. Competitive programming includes events (usually held over the internet) where participants, called sport programmers, solve specific problems or puzzles. Judging, usually done by host machines, is usually based on the number of problems solved under a time constraint. The goal is to write source code that solves a given logical or mathematical problem.

These competitions have been around since the 1970s, and interest in the events has grown significantly over the years, including international contests and a worldwide community. These events are recognized by several large companies, like Facebook and Google. There are dozens of different competitions, including short term events, long term events, events that focus on open source tech, and more. As I mentioned, competitive programming refers to solving well-defined problems by writing computer programs under specified limits. So, let’s break that down a bit more.

Competitive programmers participate in contests like ACM ICPC, Google CodeJam, Facebook HackerCup, and many more. In these competitions, competitive programmers use their knowledge of algorithms, data structures, logical reasons, and other skills to solve difficult algorithmic problems. This is especially difficult because competitors are required to develop programs in a limited time frame. The most common programming languages for competitive programming are Java and C++ due to their relative run-time efficiency compared to other languages like Python or JavaScript.

When we asked Yash Kumar, a world finalist at ACM ICPC and creator of Educative's course competitive programming Competitive Programming in C++, about why he started competing in competitions, he said:

“It started out as just a hobby. There were constant challenges, new topics to learn, and participating in contests always made it an interesting learning experience. It didn’t start as something I was doing to crack software developer interviews, but it did help a lot. It soon became about demonstrating my skill in online and onsite competitions. Obviously, I had no income back then so prizes were an added bonus.”

"This is something I’ve stressed about in the course as well. You can get a job by taking an interview preparation course and practicing a limited set of topics. You don't showcase your competitive programming talent anywhere for a decent job. This is a sport and should be treated like one. You do it because you enjoy the time you put into it and get something to show for it. Competitive programming will definitely help you with your job interviews, but you don't have to do CP to prepare for those.

How does competitive programming work?

Applications and Time Complexity. Beyond just knowing the concepts, you need to know what, when, and where to apply them. This means knowing which data structure should be used for a certain problem for the most optimal solution. You'll need to understand the concepts of time and space complexity, like Big O Notation. This is key when being a competitive programmer because much of your placing revolves around how quickly you can solve the problem.

Practice, practice, practice. So, you’ve determined your programming language of choice and learned about data structures and algorithms. Now, you should continue practicing. You want to start practicing on some online platforms before participating in an official contest. Some sites for practice are Codechef, Codeforces, Topcoder, and SPOJ. Start with the basic problems, and once you are more confident, you can gradually try more difficult and complex problems. If you truly want to succeed in competitive programming, you will need to practice regularly.

If you’re ready to participate in an official competition, here are some to consider:

Google also hosts a number of programming contests like Google Code Jam, Google Hash Code, and Google Kickstart. Here's a word of advice from Yash before you get started:

“Competitive programming is a sport, if you don’t enjoy the process, it’s probably not for you. Developers are problem solvers, using existing knowledge to solve an unknown problem. CP makes you a better problem solver than non-CP developers. The same is the reason why many companies will go beyond a typical SD interview into CP to hire better problem solvers, especially at earlier levels."

So what do the competitions look like? A majority of the programming problems and challenges you will be given are mathematical or logical in nature, typically involved one of the following categories: combinatorics, number theory, graph theory, geometry, string analysis, and data structures. The process of solving a problem normally involves two steps.

Typically, you’ll be judged automatically by host machines. All the solutions submitted by contestants will be run on the judge against a series of test cases. Most of the time, problems have an all-or-none marking system, meaning that the solution is either accepted or rejected. The faster you complete an accepted solution, the higher the online judges will rank you.

C++ is by far the most popular programming language for competitive programmers. It offers a library called STL (Standard Template Library). STL is a collection of C++ template classes that provides common data structures and functions.

C++ is followed by other languages like Java, an Object Oriented Programming language. Java offers extensive libraries for data structures called Collections. Still, it’s a bit slower than C++, which is a downside. Another popular language in competition programming is Python because of its user-friendly functionality, as the code is significantly shorter and more concise than other programming languages. The downside to using Python is that it is quite slow compared to C/C++ and Java.

Looking to review C++? Check out our course Learn Object-Oriented Programming in C++

There are three cases to consider:

When you are participating in a competition, you want to focus on the worst-case analysis. Typically, the inputs will force your solution to its worst-case performance.

Big O notation is an asymptotic analysis that describes how long an algorithm takes to perform. In other words, it’s used to talk about how efficient or complex an algorithm is. You should brush up on this concept by checking out the article What is Big-O Notation?

Understanding data structures is integral to participate in competitive programming, as you will be faced with making decisions on what data structure to utilize to most efficiently solve the problem you are given. If you've taken a computer science course in college, you most likely are familiar with data structures. You should cover:

Looking for a refresher on data structures? Visit our Top Data Structures and Algorithms to know article.

Competitive programming deals with a lot of math, so it's important to review mathematical concepts used by developers. Let's review some of the main topics covered in competitions. These basic fundamentals can make or break your success!

Sum of an arithmetic sequence with $n$ terms is

Geometric sequences are a series of numbers such that the next term is obtained by multiply the previous term with a common multiplier. For example, 2, 4, 8, 16, 32. The common multiplier is 2.

Sum of a geometric sequence with n terms is

where r is the common multiplier, n is the number of terms, and a is the first term.

Algorithmic paradigms are general strategies for solving a problem. There are four popular forms of algorithmic paradigms: brute force, divide & conquer, greedy algorithms, and dynamic programming. For today, you will learn about Brute Force and Dynamic Programming (DP).

A graph is a non-linear data structure that consists of nodes and edges. These nodes can also be referred to as vertices. Below is a visualization of a graph. 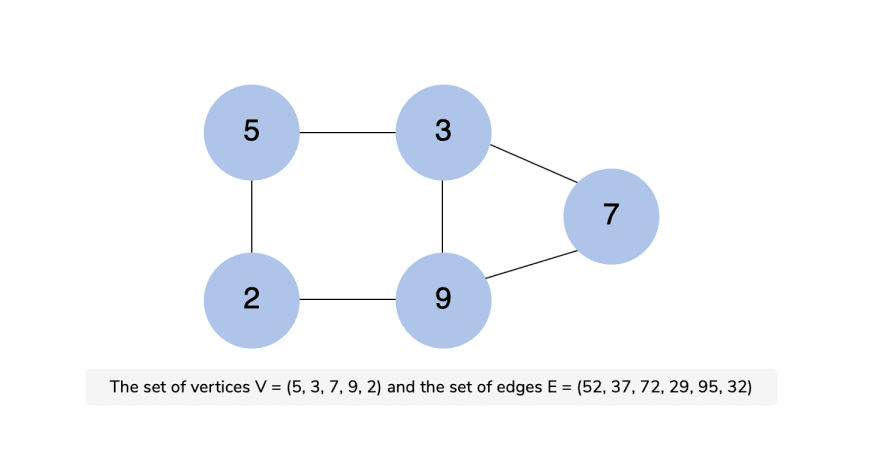 Wrapping up and Resources

Now you have a sense of what competitive programming is and what concepts you'll need to brush up on before competing. If you are curious about how to compete, visit the sites below. And now, some final words from Yash:

"Get yourself around people who enjoy CP. Having a group like this definitely was one of the top reasons why CP never became boring for me. Discussing new problems late at night with your friends after a competition might sound nerdy but having a motivated circle will keep you motivated. I often see students spending months on CP theory and never participating in a competition (online or onsite), fearing that they don’t know enough to start competing, or fearing the pressure of a timed contest. Writing accurate and fast code is a huge part of CP and this can only be improved by getting into a live contest.

Yash has compiled his years of experience and passion for competitive programming into a one-stop-shop course for beginners. His guide walks you through the process, insider tricks, and all the concepts you'll need to master. Get started with Competitive Programming in C++: The Keys to Success.