Interfaces are used to standardise the way a particular set of classes are used. An interface specifies common behaviour, which needs to be implemented by the classes. It can be described as a blueprint of a class.

Every method declared in an interface will need to be included in a class which implements it. The body of methods in an interface are empty, and therefore classes implementing it need to override the methods to add a method body.

An interface contains methods and constants, which are automatically public andabstract. As a result, including these keywords is optional.

For example, here’s the play method in the Pet interface. It has an empty method body:

Interfaces have an is-a relationship. In the example below where Cat is implementing Pet, Cat is-a Pet:

Cat has overridden the play method in the Pet interface, with its own playmethod.

Below is another example, using an interface called MediaPlayer. The classes MusicPlayer and VideoPlayer implement the interface.

MusicPlayer and VideoPlayer have implemented the play, stop, and currentlyPlaying methods declared in MediaPlayer, by overriding them.

What Are Abstract Classes?

The purpose of an abstract class is to provide a common definition of a base class that multiple derived classes can share.

It should be used when a class contains some implementation code, which all subclasses can use, such as a method with a body. Like interfaces, an abstract class can also be referred to as a blueprint.

The difference is in an abstract class, the abstract keyword needs to be used when declaring the class and abstract methods. Here’s an example:

In addition, methods within this class type can have any visibility, where as in an interface, methods are public only.

An abstract class can implement an interface. In addition, a subclass of an abstract class usually provides implementations of all abstract methods from the parent class. If not, the subclass must also be declared as abstract.

What Are Concrete Classes?

It demonstrates the implementation of a blueprint. Any abstract methods are overridden, to include a method body.

A concrete class can implement multiple interfaces, but can only inherit from one parent class.

In the example below, the Dog class inherits its methods from the interface, Pet, and the abstract class, Animal. 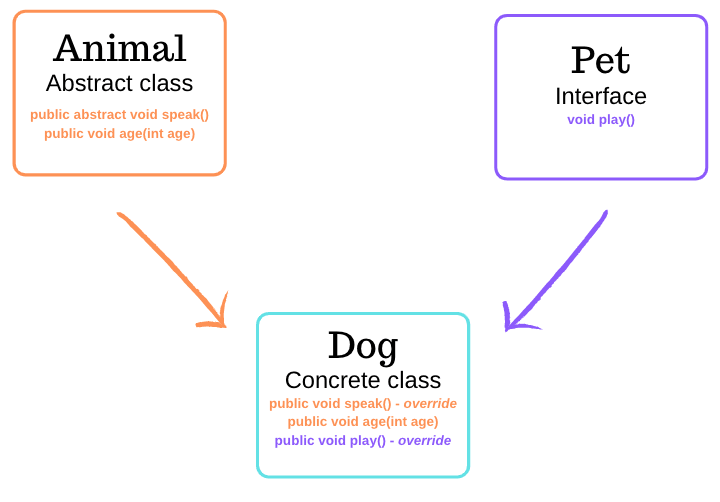 Another example of a concrete class is an ArrayList in Java. It implements the methods in the List interface. It also extends from the AbstractList class. In addition, it implements other interfaces, such as Iterable and Cloneable.

How to use Dependency Injection in Functional Programming

Once suspended, ellehallal will not be able to comment or publish posts until their suspension is removed.

Once unsuspended, ellehallal will be able to comment and publish posts again.

Once unpublished, all posts by ellehallal will become hidden and only accessible to themselves.

If ellehallal is not suspended, they can still re-publish their posts from their dashboard.

Once unpublished, this post will become invisible to the public and only accessible to Elle Hallal 👩🏽‍💻.

Thanks for keeping DEV Community 👩‍💻👨‍💻 safe. Here is what you can do to flag ellehallal:

Unflagging ellehallal will restore default visibility to their posts.