Originally published in my blog.

Before starting, let me see what are the versions of python I’ve on my machine: 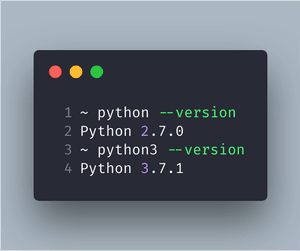 Surprise! I’ve two different versions installed on my machine. Fine, I wanted to use the Python 3.7.1 version for my development.

Let’s create the project and setup the environment.

Setup pipenv environment to use Python 3.x version. Run the following from the current directory:

The above command will first create a virtual environment, then creates a Pipfile and then creates Pipfile.lock.

The Pipfile contains some useful information:

First, let’s install few packages for production use. To install a package with particular version.

This will install the package and update the lockfile with dependencies details. The packages section in your Pipfile should look like this now:

The above command will install numpy package in the dev-packages section.

To run any command using our virtual environment, we can simply use pipenv for it. For example, to open the python3 shell, you can simply trigger the following command.

Notice the version of python it shows.

Now I’ve the package management in place. In my future posts, I’ll share more about my learnings. Keep watching and don’t forget to hit like and share in case you found this useful.

Once suspended, email2vimalraj will not be able to comment or publish posts until their suspension is removed.

Once unsuspended, email2vimalraj will be able to comment and publish posts again.

Once unpublished, all posts by email2vimalraj will become hidden and only accessible to themselves.

If email2vimalraj is not suspended, they can still re-publish their posts from their dashboard.

Once unpublished, this post will become invisible to the public and only accessible to Vimalraj Selvam.

Thanks for keeping DEV Community 👩‍💻👨‍💻 safe. Here is what you can do to flag email2vimalraj:

Unflagging email2vimalraj will restore default visibility to their posts.