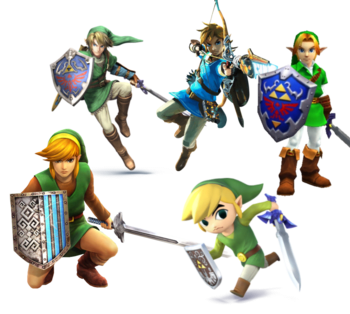 Some of my favorite Links. (Image: TV Tropes)

Welcome back to Whiteboarding with Erik. Last week we talked about linked lists: what are they, how to make one in Python. You probably thought, "Great. But what is the actual point of doing this? Can't we just use a regular Python list?" Good question.

You see, so far we just made a linked list, but we haven't done anything with it. Forget about Python lists for a moment, and think about an array. In many object oriented languages like Java, arrays are fixed length. That means if you want to add or remove a space, you need to make a new one and move all the previous contents into it. It's like if you lived in a house with 3 bedrooms and suddenly you needed a 4th bedroom: you would have to pack up all your stuff and move into a new house with four bedrooms.

Now Python lists aren't true arrays, but implemented dynamic arrays, which have different performance from both linked lists and arrays (more information here). But at least compared to the old arrays, Linked Lists make list manipulation much easier, because we don't have to make a whole new list just to add one node. We simply make a new node and change the pointers from the other nodes.

Let's look at a sample problem:

First of all, we're going to need the Node class we wrote last week. Now we can make the linked list in question before we start manipulating it. Here's that code:

Let's start by defining the method to remove duplicates. It will take one parameter, the first node in the list. I'll call it front.

Now let's try to imagine how we would solve this problem if it were a regular list. We would store a count of each value, and if we came accross the same value twice, we would remove it. You're probably thinking of using a dictionary, and if you know me, yep, I'll be using a default dicitonary.

To review, defaultdict is an object in Python collections that allows to set a default type for values in a dictionary. We can set it to bool so that if a key has no previous value, it will automatically set it to False. So, will import it and initialize our dictionary. I'll call it counted, since it represents whether or not we've seen each value before.

Now, we have to make our iterator to traverse the list. You may remember this from last week, we make a separate node to point to each node in the list, "traversing" it, and this leaves the original list intact. Here's a helpful gif from GeeksForGeeks where a pointer traverses a linked list and removes the last node:

So, let's make our pointer. Traditionally, we might call it temp.

Now, let's talk about traversing. We could check the value of the first node, then move onto the 2nd and check its value, and so on, but we'd have a problem. What if the node we were looking at had a duplicate value? We can only change its next pointer, not the pointer that goes before it. So, we'll look at the value of each next node, and if it happens to be a duplicate, we'll set temp.next to be None.

We start by putting the first node's value, 1, in our counted dictionary.

Next, while still pointing to the first node, we look at the value of temp.next. Since this value is a duplicate, we want to remove the node. So we set temp.next to be the node after it, temp.next.next.

If the value of temp.next is not True in counted, we want to set it to true. Then, we want to move onto the next node by setting temp to be temp.next.

And that's it! Here is the full method:

Let's see if our method works. We'll start by making a linked list and appending some numbers to it.

If you want to see the linked list, you'll have to traverse it and print each node. We went over this last week, but here is the code:

You might still be wondering why this is important to learn. Linked lists are kind of a holdover from traditional computer science. However, if you want to understand more complicated structures, such as binary trees, linked lists are a good stepping stone. And, if you can implement your own linked list, you can modify it to have custom methods to serve specific purposes. We'll look at this next week, when we use linked lists to implement a simple blockchain. You heard right! Blockchain is, in essence, a very complicated linked list. So maybe after next week, some of you will be able to make your own cryptocurrencies.

That's it for this week. Let me know if you like this content, and thanks to all of you who leave comments. It's been great to see the community getting involved, and that way we all learn more (myself included)!

Full-tilt Driven Development: Unleashing the Optimist Within (with realistic expectations)