“The future of mobile is the future of online. It is how people access online content now.”
–David Murphy

You will find a smartphone with almost everyone today. Smartphones are available with more than 36% of the world’s population. This makes the numbers huge. With the increase in the number of smartphones comes the need for more mobile applications. More people turn to mobiles nowadays than depend on their laptops or desktops.

With the increased use of mobile phones, businesses realized that they should develop mobile apps. This is what will keep them visible to the public. Mobile apps helped companies to improve business. They created more leads that became sales. But mobile apps had to be made separately for Android, iOS, and Windows. React Native and Xamarin changed the scenario. Let us see how.

Below are the points we discuss in this article: 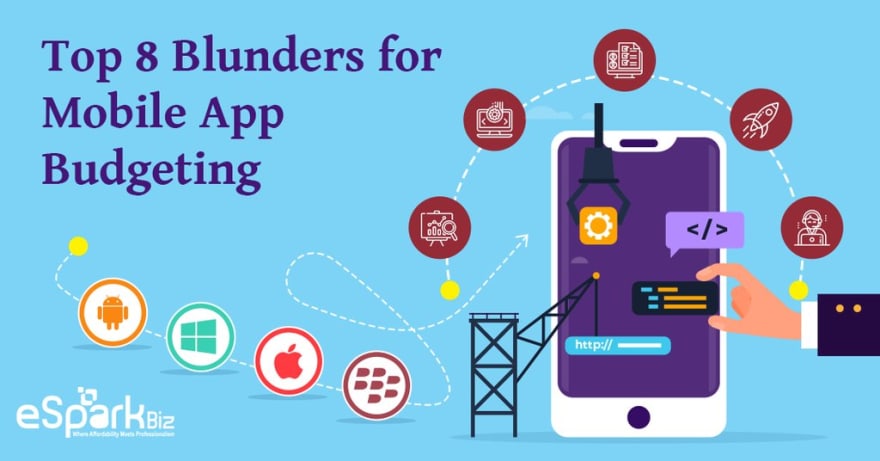 "What Are The Mistakes That Goes Unidentified While Budgeting Your Mobile App?" Know More: goo.gl/yWqWxT #MobileApplicationDevelopment #MobileApp #Mobile

As more businesses wanted to have their mobile apps, there is a lot of work for mobile app developers. Apps are being developed and deployed in the thousands every day. It is an excellent way to make money for app developers, businesses and app stores.

There is a need for developers to build the apps for iOS, Android and Windows platforms. Usually, apps for iOS were developed using Swift / Objective -C. Java was the language used for apps in Android platforms.
The introduction of React Native and Xamarin helped developers to use the same codes for creating apps in both iOS and Android platforms. This saved a nice amount of time and money. These apps are useful by themselves, but different in many ways.

When developing apps for different platforms, it is better to use the native frameworks. You can develop apps for Android using Java and apps for iOS using Swift or Objective C. You develop two separate apps for Android and iOS platforms.

The advantage of using native frameworks is that they will get new features first. The frameworks will gain support as the OS is in development. The user gets a better experience with the interface. All apps developed for the platform will have the same look and feel.

The disadvantages are many. You have to write the same code two times for each platform. The languages are different. The approaches and the method to build the GUI are different. It can be challenging. 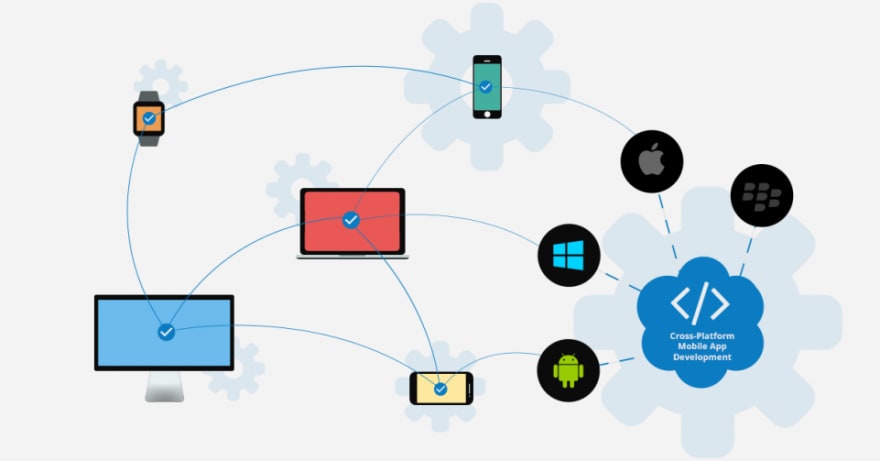 The introduction of cross-platform frameworks has helped in creating apps much faster. It helped the developers to use the same code for both platforms. The app development programs become cheap.

There is no need for developers to learn two languages. They can write programs for different platforms with the same language. They can design the GUI using the same tools. There is the big advantage of not having to duplicate the codes. Still, you can create custom UI for both platforms.

React Native and Xamarin are the two cross-platform frameworks which have helped create apps for both mobile platforms. Developers use these frameworks to offer the best experience to the user of apps in all devices. The cost is lesser, but the user gets a better experience.

Despite that fact that both these frameworks offer easy creation of mobile apps for both platforms, they have their fundamental differences. Let us see how they differ and are similar. We will see why these apps have become the favorites of app developers.

Before we go into the comparison, let us first get introduced to both the frameworks.

Facebook created this framework and launched it in 2015. It is a JS based framework. It uses the native components for front-end using the React JS library as a basis. The interaction between the native elements and JavaScript code uses different bridges instead of the conventional Web Views.

This interaction creates reactive cross-platform applications for iOS and Android. It is popular among startups as it is entirely free. There is no need for any extra money to be spent.

The main advantage is that you can code in JavaScript. You can write programs for both Android and iOS using this language. You can also get preview immediately.

Microsoft owns Xamarin. It is a framework that uses C# as the language. It was started to enable the creation of cross-platform mobile software.

Xamarin can be used to create apps for iOS, Mac OS, Android, and Windows.
Xamarin iOS library and Xamarin Android library of classes for C# enable access to the SDK of both platforms. The framework contains iOS and Android compilers. There is also a Visual Studio Plugin.

Xamarin is an open source. It gets the latest updates very fast. It gets tested very frequently. It is considered the most updated framework among all cross-platform frameworks.

With React Native you can use the same deployment code on both mobile platforms. It saves on cost and reduces the time taken for development. You can use almost all codes for iOS and Android. It only needs a slight alteration.

This framework performs in a better way. React Native uses the Graphics Processing Unit instead of the CPU, unlike the other frameworks.

As React Native runs on the React framework, it allows developers to build on it easily. They can easily create upgrades for web apps. As the programming logic is easy to understand, testers can create the right testing situations. There is a significant saving on time which is essential for business enterprises.

Xamarin uses C# and .NET framework when you create apps for iOS and Android. So, you can reuse 96% of the source code. You can build all the apps using these codes.

Xamarin.Forms also help in making the development process faster. This is very helpful for new clients. You can use Xamarin.iOS and Xamarin.Android to customize the UI.

In Xamarin App Development you can connect to native libraries. You can use the plug-ins and APIs of the specific platform. This allows for solving problems related to hardware compatibility. It also allows for functionality and customization at lesser costs.

Xamarin is open source and is available with Visual Studio under the MIT license. This makes it very economical. The absence of license cost helped the framework grow. App developers consider Xamarin dependable and robust.

Xamarin is easy to maintain and update. If you update the source files, both apps in iOS and Android get updated. This helps to keep the apps updated at all time. It also saves money. 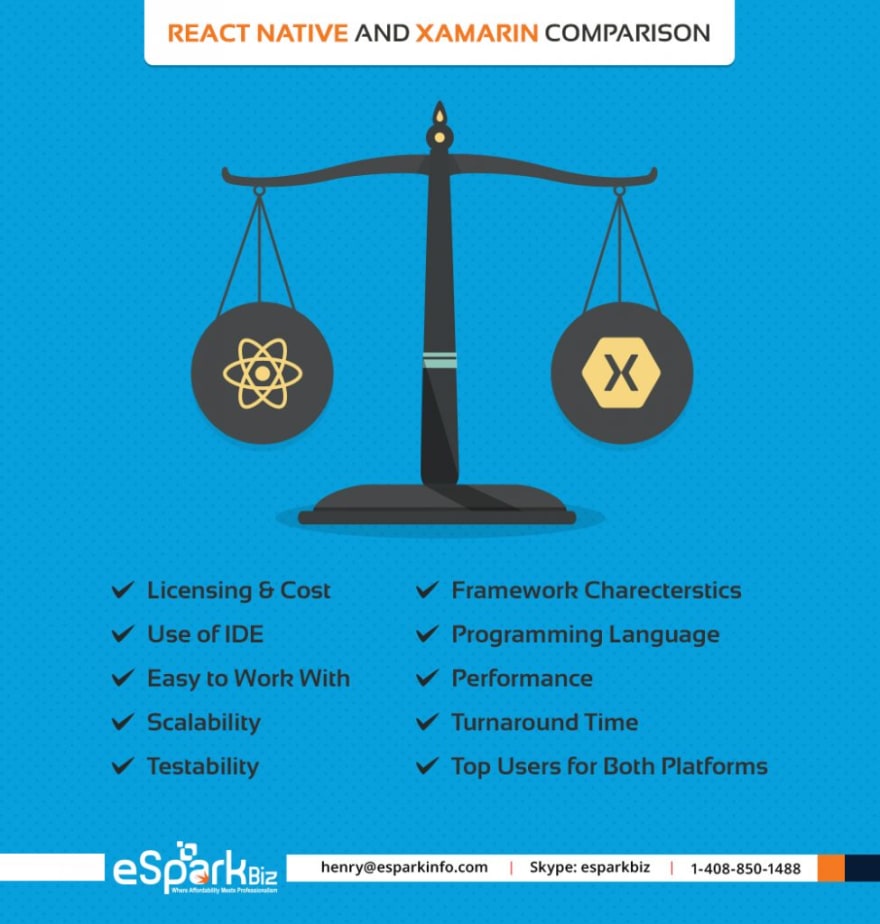 We will see how using these frameworks will affect a business when they try to develop an app. This comparison is not only in the view of the developer.

Easy to Work With

Top Users for Both Platforms

8. The Comparison In Short

Costs are almost the same for both. But Xamarin’s licensing policy is more straightforward and easy.

The design patterns are entirely different. Ease of use for developers will depend on whether they are better with JavaScript or ASP.NET technology.
With React Native you can choose the IDE. But Xamarin is more rigid in this.

The languages used by both are popular and quickly learned. The choice of the framework depends on which language the developer knows better.

If your React Native Development Company is already strong in JavaScript, then you should think about its various services. Flexibility is its biggest advantage. You can build the app by each module. Its approach is simple.

The only thing that can be an obstacle is the patent clause laid down by Facebook. If your app is going to part of a patented product, then it could pose a risk. There is also the issue of lack of available components currently. It may change soon.

Xamarin is a good choice if your team is proficient in Visual Studio. They should be expert C# developers. Xamarin has a more conventional approach to coding. It uses the MVVM design pattern with two-way bonding. This is better when developing a cross-platform mobile app.

When it comes to licensing issues, Xamarin is much safer. There would be no risk even if your app became commercial.

While Xamarin allows the use of 96% of its codes for both platforms, React Native only has 90% codes which can be common for iOS and Android. But if you consider the speed of rendering RN is the best.

The best way to decide is to see the language familiar for the developers.

Harikrishna Kundariya
Harikrishna Kundariya is an accomplished Design & Development executive with over 10 years of experience in the Developing industry. He is currently President and CEO of eSparkBiz Technologies.
Which Is The Better Framework – Ionic or React Native?
#android #reactnative #react #ionic
How to Deal with Big Data Analytics Easily?
#bigdata #technology #devtips #webdev

Once suspended, esparkbiz will not be able to comment or publish posts until their suspension is removed.

Once unsuspended, esparkbiz will be able to comment and publish posts again.

Once unpublished, all posts by esparkbiz will become hidden and only accessible to themselves.

If esparkbiz is not suspended, they can still re-publish their posts from their dashboard.

Once unpublished, this post will become invisible to the public and only accessible to Harikrishna Kundariya.

Thanks for keeping DEV Community 👩‍💻👨‍💻 safe. Here is what you can do to flag esparkbiz:

Unflagging esparkbiz will restore default visibility to their posts.