Milan Bhardwaj is a colleague and an AI/ML software engineering adept with a wealth of experience solving real-world challenges with scalable solutions. He has driven many development cycles from inception to completion and wrote this expert and well-thought-out guide to remote debugging in IntelliJ environments.

Debugging is one of the most critical aspects of software development cycles. Developers not only leverage it to find and fix errors, but also to uncover potential performance issues in the code. Being able to debug is a core skill every developer needs to have in order to provide valuable, scalable solutions.

For applications running on remote servers and computers, developers turn to remote debugging to identify issues that can’t be produced locally. For example, you might run a smaller instance of your database locally to test with, but when pushed to a production load, bugs might surface related to large data sets. Or you might not run the same permission and firewall restrictions when developing locally that you do in production. This can lead to bugs that are impossible to reproduce locally without a significant investment in tooling.

Remote debugging is particularly useful for a few reasons:

Most programming languages support some kind of remote debugging with the right tooling in place. Java includes several options for remote debugging, including integrations with most IDEs.

In this tutorial, you’ll see how to set up remote debugging on IntelliJ so you can effectively debug applications deployed to staging and production machines when necessary.

Setting up remote debugging on IntelliJ

JetBrains’ IntelliJ is one of the most intelligent integrated development environments (IDEs), used by more than 62 percent of Java developers. It offers developers out-of-the-box Java debugging functionalities that facilitate efficient, sustainable solutions.

Creating a New Project and Class

The first step is to properly set up and configure your Java project in IntelliJ. If you have not set up a Java program before, read the IntelliJ documentation to understand how you can create and configure a new Java project.

In order to demonstrate remote debugging, create a new class. Click src on the sidebar, hover on New, then click Java class. For this example, we’ll create a class named My_Numbers. 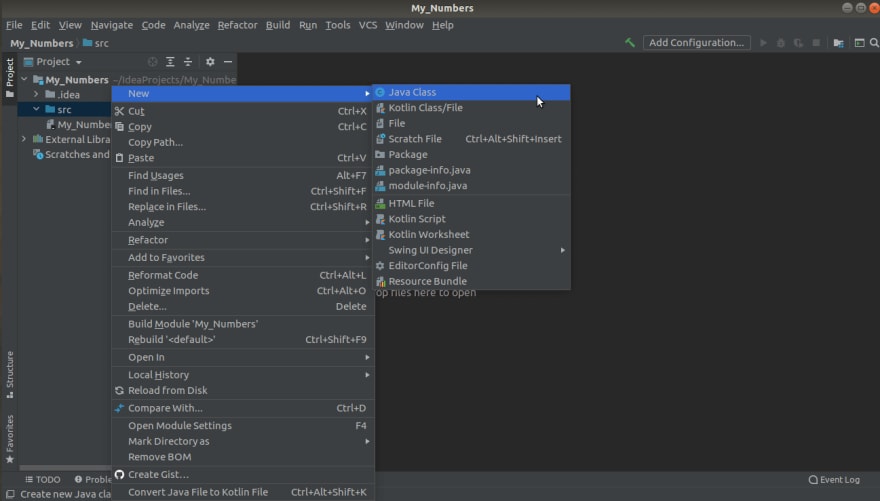 Once you have created the Java class, it’s time to write some code. Populate the Main method with the below example:

This code is a basic example that prints numbers from 0 to 100. While it’s a simple example, it will be enough to showcase remote debugging without adding too much complexity. You’ll add a [(https://www.jetbrains.com/help/idea/using-breakpoints.html)debug breakpoint] in later steps.

Now that you have a Java project and test class ready, you need to set up a debugging configuration in IntelliJ. Navigate to Run, then Edit Configurations. Click Add New Configuration (+) and choose Remote JVM Debug.

Fill in the following information to describe your remote debugging environment:

Now IntelliJ knows where to access your remote (or local) application for debugging, but you still need to package and run the Java app to enter a debugging session.

Set up the host application by packaging your application as a JAR and use the previously generated argument string directly in the command line.

Next, click Run, then Edit Configuration, then select My_Numbers from under the Application. 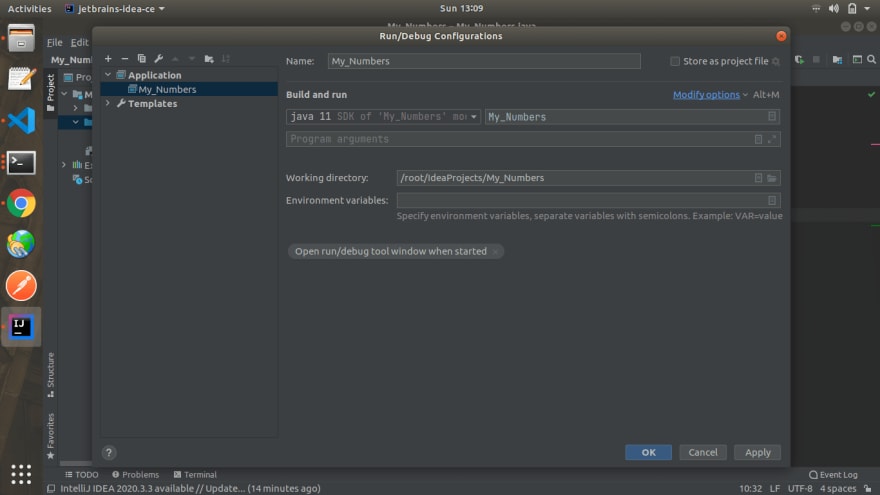 Under the VM options field, paste the argument string that you copied previously.

With the necessary setup in place, you are ready to run the application. Right-click in the text editor and click Run My_Numbers.main().

In the program output, you’ll see Listening for transport dt_socket at address: 5005, followed by your app’s output. The first line states that the debug agent is active and the program is ready to accept incoming debugger connections.

Now that your Java program is running, you can add a breakpoint and attach it to the process. Breakpoints allow you to set a place in the code where execution will pause so you can inspect memory, variables, and the state of your program. 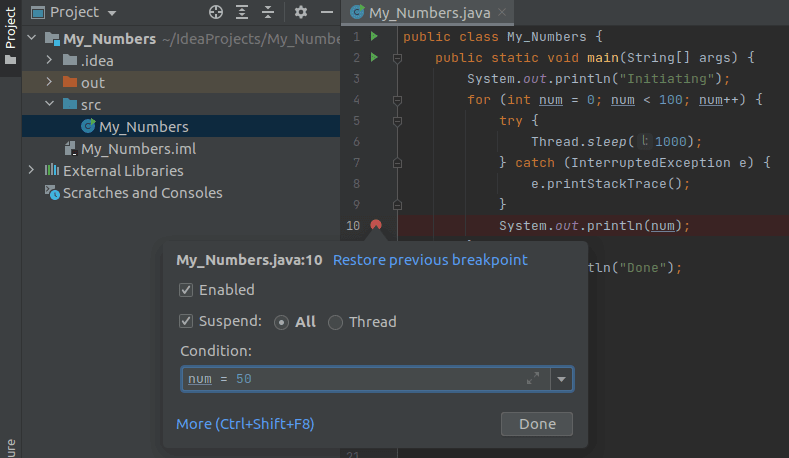 At this point, you can perform relevant debugging actions, including expression evaluation and stepping, among other tasks. These actions will work whether you’re running locally on your machine or connecting to a remote instance of your Java application.

There is no denying that with distributed applications, it has become easier to manage, scale, and divide the workload. However, the architecture makes it much difficult to detect/reproduce bugs since it’s challenging to trace anomalies back to the source or replicate complex production environments. Remote debugging with IntelliJ can help developers identify bugs and reproduce errors across every stage of the software deployment lifecycle.

Once suspended, eyalk100 will not be able to comment or publish posts until their suspension is removed.

Once unsuspended, eyalk100 will be able to comment and publish posts again.

Once unpublished, all posts by eyalk100 will become hidden and only accessible to themselves.

If eyalk100 is not suspended, they can still re-publish their posts from their dashboard.

Once unpublished, this post will become invisible to the public and only accessible to Eyal Katz.

Thanks for keeping DEV Community 👩‍💻👨‍💻 safe. Here is what you can do to flag eyalk100:

Unflagging eyalk100 will restore default visibility to their posts.