Unikernels have been a technology that have been predicted for the past few years to be the future of software infrastructure.

However, unikernels have not been without their problems. One of these problems that unikernels have traditionally suffered from is that to truly utilize them in the past you had to have been a systems developer or a low level c programmer.

OPS is a tool to help anyone build and run unikernels in whatever language or as whatever application they want. OPS simply loads ELF binaries just like Linux does but with unikernel benefits. Before 'unikernels' we had what were known as 'library operating systems'. OPS and the kernel that it uses 'Nanos' embraces that concept. They are both under heavy active development and have a full time team of paid kernel engineers working on it. (This has also been historically a big problem for the ecosystem.)

For local development OPS works on linux or mac currently.

To get started you'll want to install the cli tool - if you aren't a Go user you can just download the binary from the site but if you are a Go user than you can build it yourself as well once you obtain the source .

Put this into a file:

Then you can run it.

Put this into main.go:

If you are on a mac specify the os as 'linux'. It's important to note that it's not running linux underneath - at all. Unikernels aren't containers. The only reason we specify GOOS as linux is that Nanos implements the POSIX standard (to some degree) and loads our programs as ELFs.

You can verify this by looking at the filetype:

Note that I built this on a mac whose native file type is a Mach-O. We mainly support ELF since that is what is deployed to production.

Now let's create a folder to put our static assets in:

Then let's specify a config.json for this:

This simply states that we wish to put the directory 'static' into /static as a folder in our filesystem. There are many advanced options that you can explore with OPS config.json but please be aware that it is under active development and a lot of it can and will change.

Now we are going to run it. OPS implements a very small wrapper around QEMU. Qemu allows us to run the resulting built image as a virtual machine. The virtual machine is the output of ops building your app as it's own unique little operating system. Have you ever wondered to build your own operating system? Well you just did.

By default OPS will run your unikernel in what's known as 'user-mode' networking without KVM acceleration. Usermode networking is a bit slower than a proper bridged network (what you'd get on AWS or GCE) but we are playing around on your laptop so this is easy to get started with. Also, keep in mind that we run this as a non-root user by default and by default KVM will want root privileges. As a more advanced lesson later we'll show you how to configure that properly. Also keep in mind that on mac we don't have access to KVM, however, there is an equivalent - Intel HAX which we can use if we want.

Now that it is running you should be able to run curl against your server and wah-lah!

You've just built and ran your first Go webserver as a unikernel! How cool is that?

Check out the github repo, star it and let's see what else can be created! 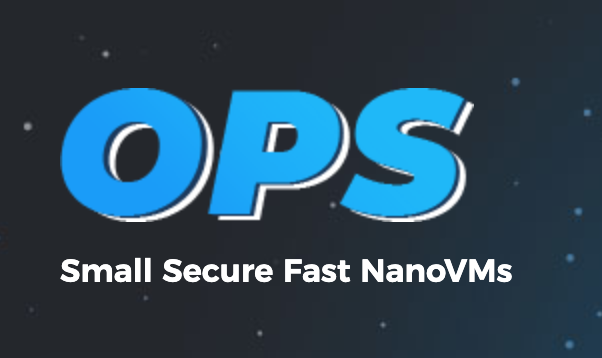 Ops is a tool for creating and running a Nanos unikernel. It is used to package, create and run your application as a nanos unikernel instance.

Check out the DOCS

Build and Install from source

Building from source is easy if you have used Go before.

Before learning more about ops it is a good idea to see some basic usage examples. Below are links to simple examples using various programming platforms:

The difference between a Virtual Machine (VM) and a Container

Once suspended, eyberg will not be able to comment or publish posts until their suspension is removed.

Once unsuspended, eyberg will be able to comment and publish posts again.

Once unpublished, all posts by eyberg will become hidden and only accessible to themselves.

If eyberg is not suspended, they can still re-publish their posts from their dashboard.

Once unpublished, this post will become invisible to the public and only accessible to Ian Eyberg.

Thanks for keeping DEV Community safe. Here is what you can do to flag eyberg:

Unflagging eyberg will restore default visibility to their posts.