This post was originally posted on The Algorithmic Cookbook under Making Word Clock, A Clock Which Tells The Time With Words

I saw a TikTok where this guy was flexing a Qlocktwo W, a watch which tells the time with words. This inspired me to make a web version of it, which I did in one evening-ish (and fixed here and there, which is more like when I started writing this post and uncovered a lot of problems with it). Here’s how.

Wowed by the watch, I tried to find it online. My first search term was for ‘word clock’, I came across an online word clock by timeanddate.com. It not only shows the time in words, it does so for multiple cities,and in different languages. Outclassed before I’ve even started. 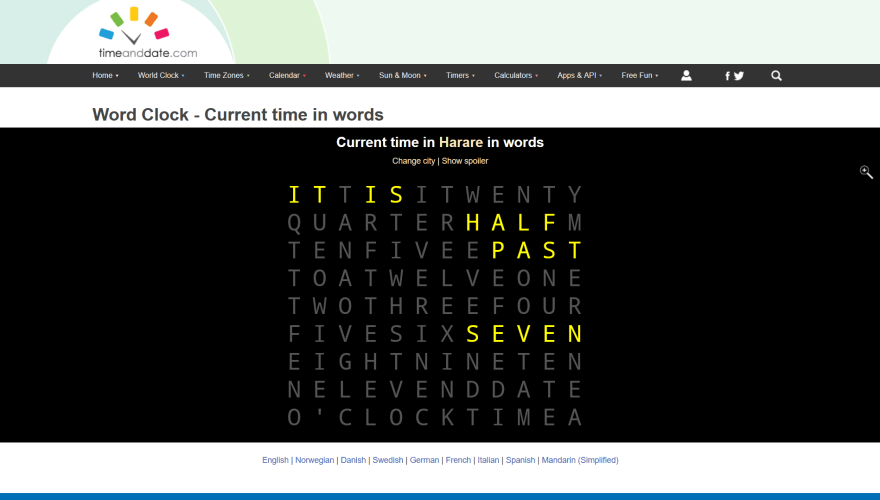 Looking around a bit more, it turns out the clock in the TikTok is called a QlockTwo W and it costs at least $800.

The first challenge was making a grid. The best way would be to generate it algorithmically, but I didn’t (and still don’t) know how to. Instead, I did it manually. At first I was going to rip one off online, but I decided to try and do it myself. 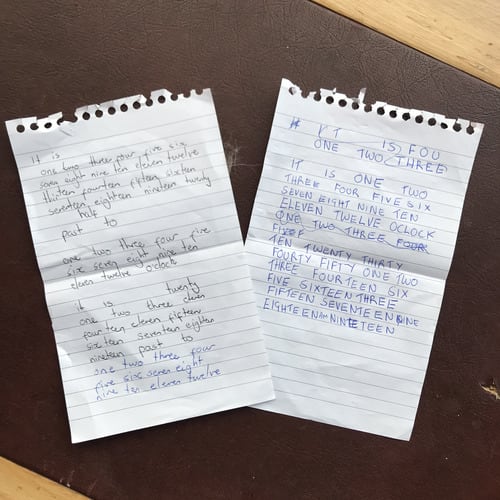 After much experimentation, I managed to make this layout. Note that the underscores are for random characters.

Turning The Grid Into Code

To build the website, I decided to use Eleventy because of how extendable it is through JavaScript. The way I’ve set it up is a big mess, but it works.

To define the grid, I created a JS file with an object containing the grid as I’ve defined it and an order in which to read the rows (eclipses for brevity).

For num items, it generates a random number from 65 to 90 (which corresponds to the ASCII codes for the letters A-Z) and pushes the corresponding ASCII character to a chars array, which is then returned. Not sure why I added the line const rc = randChars instead of renaming randChars to rc since I only used it once.

This whole thing seems terribly inefficient, but it shouldn’t matter too much since it’s for building the site. It still builds pretty quick. Then again, the really slow stuff comes later.

To show this grid on the webpage, I created a data file in the _data/ directory which imports the script I defined the grid in. As I was writing this, I realized that I could have just defined it there to begin with. Either way, it had to go on the webpage, which I did with a Nunjucks template.

Along with that, I needed to specify how the grid is defined to update the time. I did this with a massive, 201 line long object specifying where all the words are on the grid. I specified the locations for the (control???) words 'IT', 'IS'. 'OH' and 'OCLOCK', with the locations of the minutes and hours being defined in their own object. Thanks to the way my grid is designed, I didn’t have to list out all the locations for each of the 59 minutes as I put all the -TY numbers before the -TEENS and SUB-TEENS.

That means that the grid is defined in two places, one place for the markup, and another for the time controlling. With that set, it’s time to show the, uh… time?

The site’s code is in _includes/js/main.js and is initialized in the init function.

What this code does is that it:

All the fun stuff starts in. updateTime, which takes a time time.

As for what updateTime actually does,

It updates the time on both the word clock and the timeElem I made to provide an accessible version for the current time in the HTML in _includes/main.njk.

Back to updateTime, there’s the lightTime function which takes the time and shows it on the UI.

It finds all the lit items which matched the query [data-lit="true"] and turns them off by setting data-lit to false. Controlling the data-lit attribute is how I show certain times (or not).

After that, I parse the time’s hour and minutes, and initiate an array for the cells I want to light with “IT”, “IS” and the cell location corresponding to the hour.

As for minutes, I’m doing this in a switch statement:

For this site, I decided to use 11ty since it has a lot of JavaScript integration and is pretty fast. It’s structured like this:

As previosuly mentioned, _data holds the grid that is rendered by _includes/index.njk. index.njk has the web page template, with the grid. I put the site’s head in partials/head.njk, which itself contains a description tag for SEO. Surely SEO is more complicated than that. There’s also a meta generator with the Eleventy version I used.

The css.md and js.md files are there so I can concat all the css and js files into a css and js file respectivley. They need a better asset pipeline like Hugo’s or maybe I need to learn how to use it better. I should go through Andy Bell’s Eleventy Course.

I’ve gone through the JS, but the CSS is nothing special. There’s normalize.css as my reset and the CSS I declared (ellipses for brevity).

It’s the first time I’ve used CSS variables. These ones are mostly for the background and foreground colors, and the colors for the links and the states for data-lit. The sr-only is to make content visible only for screen readers, which is the access-time I mentioned earlier.

The clock rows use flexbox to spread things about and each cell has some padding and bold monospace text. Interestingly, it’s rather responsive without me specifying any max-widths and the like. There’s the margin: x auto trick to center things, but that’s the extent of my work on making the site responsive.

Last thing is that at some point I used the app play.js to run this website, and it worked. The trick is to hook into the eleventy package, and serve the site yourself. I wish I could show it to you in action, but something changed betwen Eleventy versions meaning that it doesn’t work anymore. The most I have is this picture showing the package.json file, Eleventy’s server log and the webpage, all on my iPhone 7 Plus. 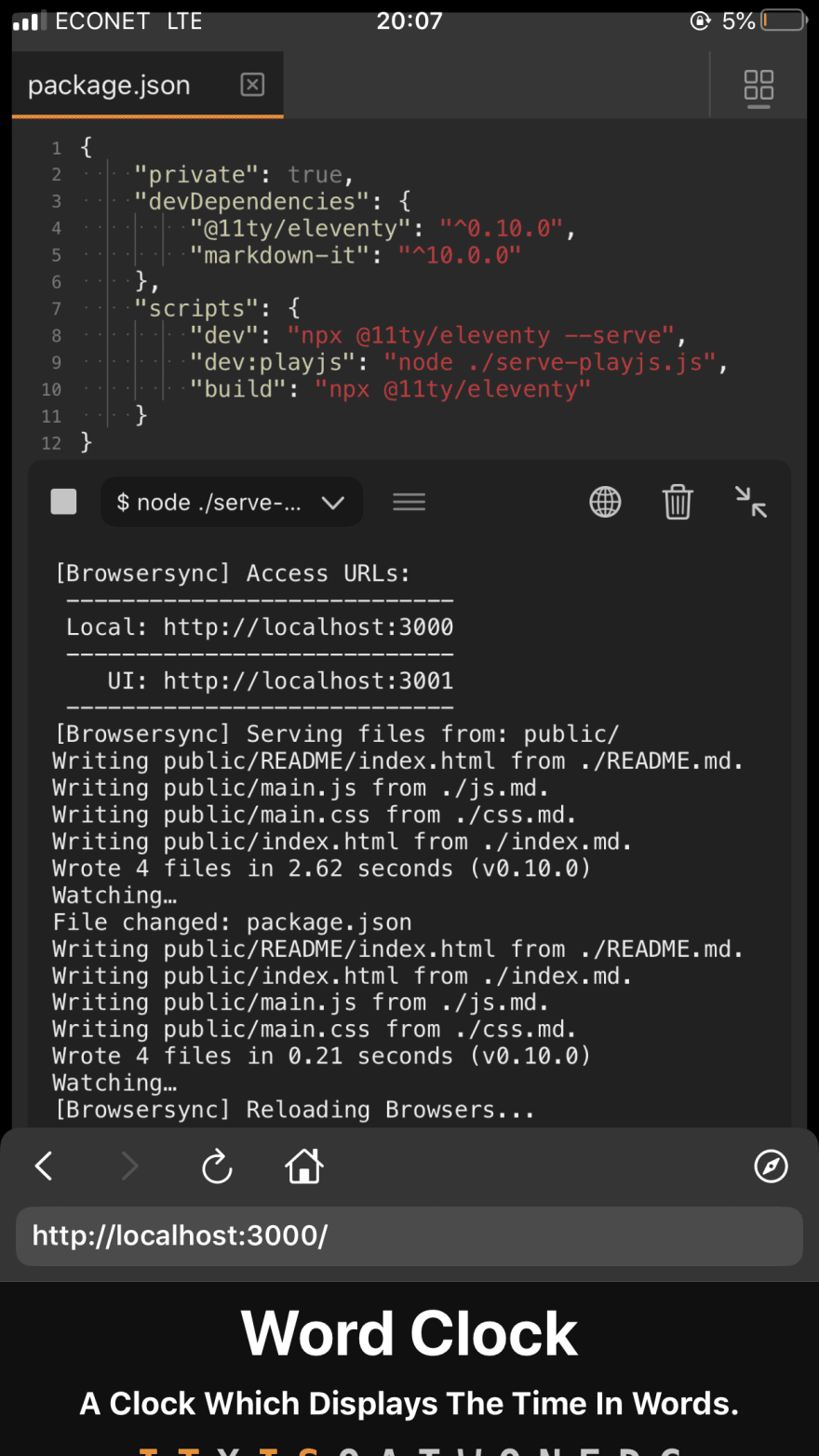 While it app itself has a long way to go (dependency resolution is rather recent and git operations are rather weak), I’m hoping that the play.js team keep improving the app.

Conclusion and What’s Next

With all my work, here’s what Word Clock looks like now: 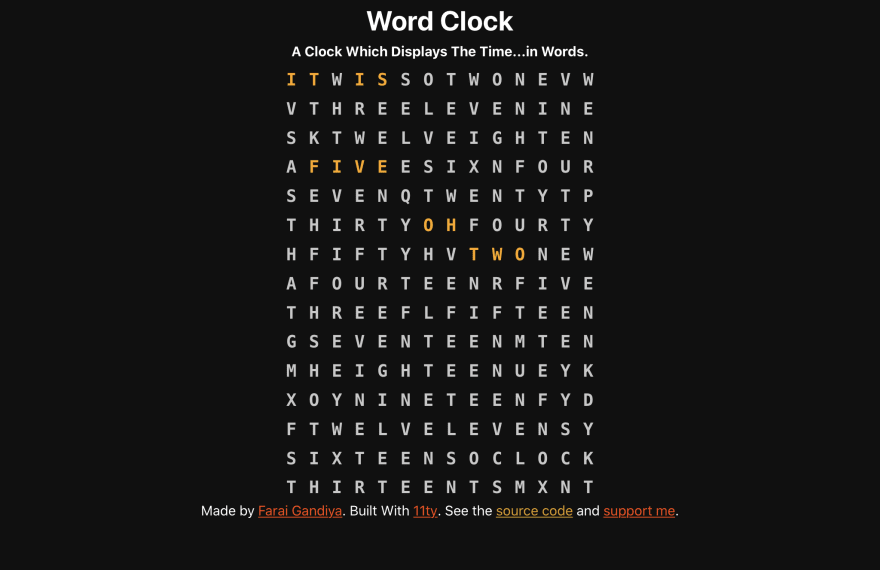 As for what I want to do next, there’s a few things. It wouldn’t hurt to make this site prettier and include a few animations here and there. Also, it would be nice to support additional locales or languages as well as to make a grid generator to make telling the time more dynamic with algorithms.

You can find Work Clock online and it’s source code on GitHub.

Thanks for reading! If you’ve enjoyed this post, you can support me by

Once suspended, faraixyz will not be able to comment or publish posts until their suspension is removed.

Once unsuspended, faraixyz will be able to comment and publish posts again.

Once unpublished, all posts by faraixyz will become hidden and only accessible to themselves.

If faraixyz is not suspended, they can still re-publish their posts from their dashboard.

Once unpublished, this post will become invisible to the public and only accessible to Farai Gandiya.

Thanks for keeping DEV Community 👩‍💻👨‍💻 safe. Here is what you can do to flag faraixyz:

Unflagging faraixyz will restore default visibility to their posts.