Recently, I took delivery of a new laptop. My old laptop was rolling up on five years old, was still running Windows 7 and had less than 1GiB of free disk space. So, "it was time".

At any rate, the new laptop runs Windows 10 Pro. One of the nice things about this is that, because MicroSoft makes Hyper-V available for free for my OS, I no longer have to deal with VirtualBox (or any add-on virtualization solution, for that matter). It means I'm free of the endless parade of "you must reboot to install new VirtualBox drivers" that pretty much caused me to stop with local virtualization on my prior laptop.

One of the nice things with virtualization is that it lets me run Linux, locally. While WSL/WSL2 show promise, they aren't quite there yet. Similarly, I'm not super chuffed that Docker Desktop for Windows requires me to run Docker as root. So, my Linux VM is an EL8 host that I am able to run PodMan on (and able to run my containers as an unprivileged user within that VM).

That said, most of the "how to run Linux on Hyper-V on Windows 10" guides I found resulted in my networking getting completely and totally jacked up. When not jacked up, my Internet connection looks like: 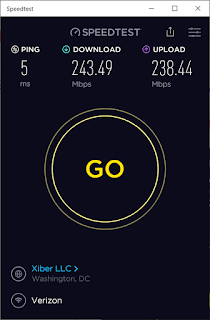 However, after initially booting my CentOS VM, I noticed that my yum downloads were running stoopid-slow. I assumed the problem was constrained to the VM. However, being detail-oriented, I checked my OS's network speed. It was, uh, "not good". I was getting less than 4Mbps down and about 0.2Mbps up. I also found that, if I rebooted my system, my download speeds would come back, but my uploads still sucked. Lastly, I found that if I wholly de-configured Hyper-V, my networking returned to normal.

I hit the Googs and everyone is saying "this is a known issue: you can fix it by changing your NIC settings." Unfortunately, the mentioned settings weren't available in my NIC. Dunno if it's because I'm using WiFi or what. All I know is that it was looking like my choices were going to be "have good Internet speeds or have Linux on Hyper-V".

I'm not real keen on such choices. So, I kept digging – eventually getting to the point where I went beyond the first page of results. Ultimately, I found an answer on one of the StackExchange forums. Interestingly, the answer I found wasn't even marked as the "best answer". Had I not read through all the responses on one thread, I wouldn't even have found it.

At any rate, the fix was to not use my NIC in bridged mode at all. Instead, I needed to ignore all the top-match guides' instructions to use an "External" interface (which puts your NIC into bridged mode) and, instead, use an "Internal" interface ...and then set up connection-sharing, allowing my private vSwitch to share (rather than bridge) through my WiFi adapter. As soon as I made that change, my speeds came back.

Postscript: since writing the above, I've found that all is not roses with the above solution. While it does restore networking performance, the cost is that, when I reboot my main OS, I usually have to temporarily disable and re-enable the NIC-sharing or my VMs won't receive DHCP leases.

Thomas H Jones II
Been using UNIX since the late 80s; Linux since the mid-90s; virtualization since the early 2000s and spent the past few years working in the cloud space.
4 Problems with Slack that can ruin remote work‍
#watercooler #productivity #discuss #remote
Why did I choose to become a developer?
#webdev #watercooler #devjournal #career
Do you prefer GraphQL over REST?
#discuss #api #rest #graphql