One of the joys of the modern, corporate security-landscape is that enterprises frequently end up locking down their internal networks to fairly extraordinary degrees. And, as software and operating system vendors offer new bolts to tighten, organizations will tend to do so - they sometimes do so without considering the full impact of what that tightening will do.

Several of my customers protect their networks not only with inbound firewalls, but firewalls that severely restrict outbound connectivity. Pretty much, their users' desktop systems can only access an external service if its offered via HTTP/S.

Similarly, their users' desktop systems are configured with application whitelisting enabled. This prevents not only power users from installing software that requires privileged-access to install, but also prevents users from installing things that are wholly constrained to their home directories. This kind of security-posture is suitable for the vast majority of desktop users, but is considerably less so for developers. Worse, getting things added to the whitelists borders on "act of god" level of request.

The group I work for provides cloud-enablement services. This means that we are both developers and provide services to our customers' developers. Both for our own needs (when on-site) and for those of customers' developers, this has meant needing to have remote (cloud-hosted), "developer" desktops. The cloud service providers (CSPs) we and our customers use provide remote desktop solutions (e.g., AWS's "Workspaces"). However, these services are typically not usable at our customer sites due to the previously-mentioned network and desktop lockdowns: even if the local desktop has tools like RDP and SSH clients installed, those tools are only usable within the enterprises' internal networks; if the remote desktop offering is reachable via HTTP/S, it's typically through a widget that the would-be remote desktop user would install to their local workstation if application-whitelisting didn't prevent it.

To solve this problem or both our own needs (when on-site) and our customers' developers' needs, we stood up a set of remote (cloud-hosted), Windows-based desktops. To make them usable from locked-down networks, we employed Apache's Guacamole service. Guacamole makes remote Windows and Linux desktops available within a user's web browser.

Guacamole-fronted Windows desktops proved to be a decent solution for several years. Unfortunately, as the cloud wars heat up and CSPs try to find ways to bring - or force - customers into their datacenters, what was once a decent solution can become not decent - often due to pricing factors. Sadly, it appears that Microsoft may be trying to pump up Azure-adoption by increasing the price of cloud-hosted Windows services when those services are run in other CSPs' datacenters.

While we wait to see if and how this plays out, financially, we opted to see "can we find lower-cost alternatives to Windows-based (remote) developer desktops." Most of our and our customers' developers are Linux-oriented - or at least Linux-comfortable: it was a no-brainer to see what we could do using Linux. Our Guacamole service already uses Linux-based containers to provide the HTTP/S-encapsulation for RDP and Guacamole natively supports the fronting of Linux-based graphical desktops via VNC. That said, given that the infrastructure is built around an RDP, it might prove to ease some of the rearchitecting-process by keeping communications RDP-based even without Windows in the solution-stack.

Because our security guidance has previously required us to use "hardened" Red Hat and CentOS-based servers to host Linux applications, that was our starting-point for this process. This hardening almost always introduces "wrinkles" into deployment of solutions - usually because the software isn't SELinux-enabled or relies on kernel-bits that are disabled under FIPS mode. This time, the problem was FIPS mode.

While installing and using RDP on Linux has become a lot easier than it used to be (tools like XRDP now actually ship with SELinux policy-modules!), not all of the kinks are gone, yet. What I discovered, when starting on the investigation path, is that the XRDP installer for Enterprise Linux 7 isn't designed to work in FIPS mode. Specifically, when the installer goes to set up its encryption-keys, it attempts to do so using MD5-based methods. When FIPS mode is enabled on a Linux kernel, MD5 is disabled.

Fortunately, this only effects legacy RDP connections. The currently-preferred solution for RDP leverages TLS. Both TLS and its preferred ciphers and algorithms are all FIPS compatible. Further, even though tin installer fails to set up the encryption keys, these keys are effectively optional: a file at the expected location for keys merely needs to exist, not actually be a valid key. This meant that the problem in the installer was trivially worked around by adding a touch /etc/xrdp/rsakeys.ini to the install process. Getting a cloud-hosted, Linux-based, graphical desktop ultimately becomes a matter of:

Once the above is done, you can test things out by RDPing into your new Linux host from a Windows host …and, if you've installed Vinagre, RDP from your new, XRDP-enabled Linux host to Windows host (for a nice case of RDP-inception). 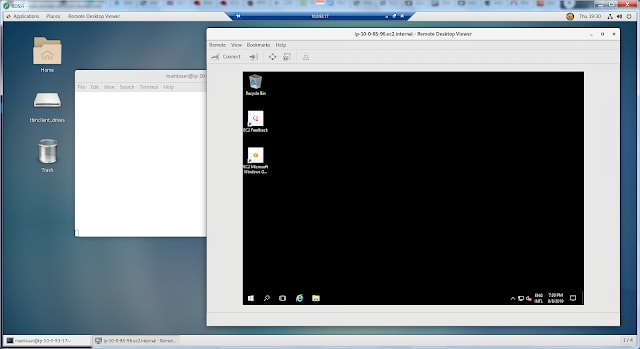 Pure Functions in Solidity - The Basics

Create your own blog with MDX and NextJS

Thomas H Jones II
Been using UNIX since the late 80s; Linux since the mid-90s; virtualization since the early 2000s and spent the past few years working in the cloud space.
The Punishment of NFS on Hardened EL7 Systems
#centos7 #el7 #nfs #rhel7
So You Wanna Run Sonarqube on (Hardened) RHEL/CentOS 7
#aws #centos #centos7 #cloudformation

Once suspended, ferricoxide will not be able to comment or publish posts until their suspension is removed.

Once unsuspended, ferricoxide will be able to comment and publish posts again.

Once unpublished, all posts by ferricoxide will become hidden and only accessible to themselves.

If ferricoxide is not suspended, they can still re-publish their posts from their dashboard.

Once unpublished, this post will become invisible to the public and only accessible to Thomas H Jones II.

Thanks for keeping DEV Community 👩‍💻👨‍💻 safe. Here is what you can do to flag ferricoxide:

Unflagging ferricoxide will restore default visibility to their posts.