This article started as a bear market distraction for all the sad builders in the Web3 space that lost some money in the last months. Just playing around with some Web3 tech I found interesting.

Open up your IDE, anon. It's never a bad time to build 🚀

After I wrote it, I got the impression it's an excellent way for Web2 devs to dip their toes into decentralized technology without being distracted by the money that usually pulls people into Web3.

There are two exciting decentralized technologies out there, and you can use both of them without cryptocurrencies: Radicle & IPFS.

This tutorial will allow you to try Web3 tech without selling your soul to the crypto gods!

We will deploy the default app create-react-app emits right after initialization. You don't need to understand React for this; it should work with every other framework that can emit an SPA.

Here is the first nice thing: you can use many of your Web2 dev skills in Web3. A decentralized app (DApp) will still run in the browser like a regular web application; it will just use tech that isn't centralized.

We will start by setting up version control with Radicle, a decentralized alternative to centralized services like GitHub or GitLab.

The easiest way to install Radicle is via apt.

These commands will update your package repos and install the Radicle CLI:

After this, you'll have a rad command.

The idea behind Radicle is that you sign all your code with a private key. Your identity isn't bound to a central service like GitHub. You have the key; you have the identity.

Since you signed the code with your private key, you can tell any node that you are the actual owner of it. All a node has to do is check your signature against a public key.

So, as with any decentralized system: keep your private key safe!

This command creates your Radicle identity:

Radicle differentiates between peer IDs and personal URNs because every dev might want to use different computers, which can end up with various states of the code base.

Now, we actually need a codebase we can put into Git and, in turn, onto the Radicle network. For this, we use create-react-app, a tool that will set up a bare SPA for us.

Use this command to get a fresh React app:

Now, we need to tell Radicle about the Git repository that create-react-app just created for us. This will start the signing process we talked about above. You can prove your identity to the Radicle network later when you want to push updates.

Pushing to the Radicle Network

Next, we need to upload our fresh repo to the network, to make it available to other devs or ourselves on different devices.

Radicle will ask you for a preferred network, and after that, it will upload your repo. You can choose the default, which should be willow.

If you get an ssh-agent error run val $(ssh-agent) > /dev/null and then rad auth again.

Now that the initial version of the codebase is on the Radicle network let's make a change and push it!

For this, replace the content of src/App.js with the following code:

And run these commands:

To understand how these commands work together, let's look at the following image: 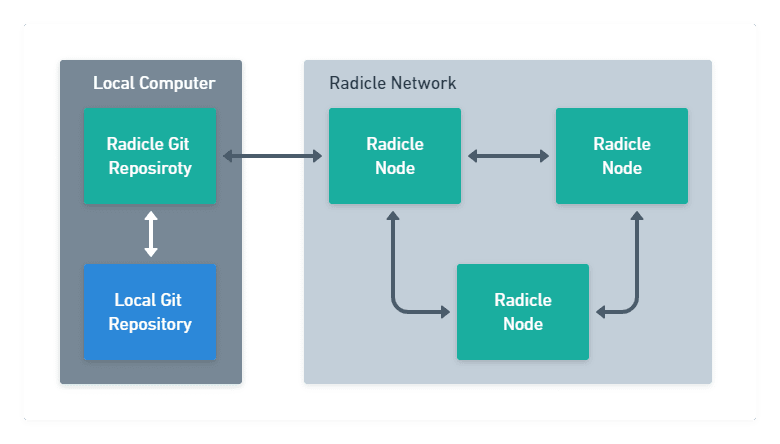 The first two commands add a new change to the stage and commit it with a message. Nothing special here. The change will end up in the "Local Git Repository."

The third command will push the local changes to a remote. But in the case of our Radicle setup, this isn't a remote server; it's a local server managed by Radicle. So, after this command, the change is still local to our computer.

The rad push command now will sync our "Radicle Git Repository" with the Radicle network. This is the equivalent of git push for centralized services like GitHub.

Cloning the Repo on Another Device

Finally, if someone wants to work on the code from another location, they can either use the Radicle web interface to get the project ID, or you can get it locally with this command:

Everyone you give this ID can clone the repo with the Radicle CLI:

The seed can differ depending on how you initialize your repo, but the one in the example is the default.

Now that our development setup is ready and all our fellow devs can access the code, we want to deploy the app so our users can do something with it. For this, we will deploy the code to IPFS.

Some Background on IPFS

This allows for decentralized storage of data worldwide in the IPFS network. If someone messes with your data, the URL changes too. So, if you keep using your old URL, your data will be the same, independently of its location on the network.

But this doesn't solve the problem of persisting that data. If you have a hash to information that isn't on the network, you don't get the wrong data, but that's because you don't get any data.

As the name implies, this service uses a cryptocurrency, but at least right now, it comes with a free storage contingent, so, again, no crypto wallet is needed.

Also, if users think your DApp is pretty cool, they might pin it on their own IPFS nodes, and it will stay online even if you aren't around anymore to maintain it.

In this tutorial, we will use Web3.Storage, a tool & service that uploads our DApp to Filecoin to make it available via IPFS.

To get started, you need to create a Web3.Storage account. While IPFS and Filecoin are decentralized, Web3.Storage itself isn't.

Next, you have to create an API token, so your deploy script can access the Web3.Storage service.

Create a deploy.mjs script inside your project directory and add the following code:

This will connect to the Web3.Storage service, gather all files in the build directory and then put them (through Web3.Storage) onto the Filecoin network.

The wrapWithDirectory: false flag ensures we find our files in the root of the URL and not wrapped with a build directory.

In the end, the script will log an URL to an IPFS gateway that includes the CID, which is the hash of our deployed files.

But since it's decentralized, you could also use a different IPFS gateway with the same CID. 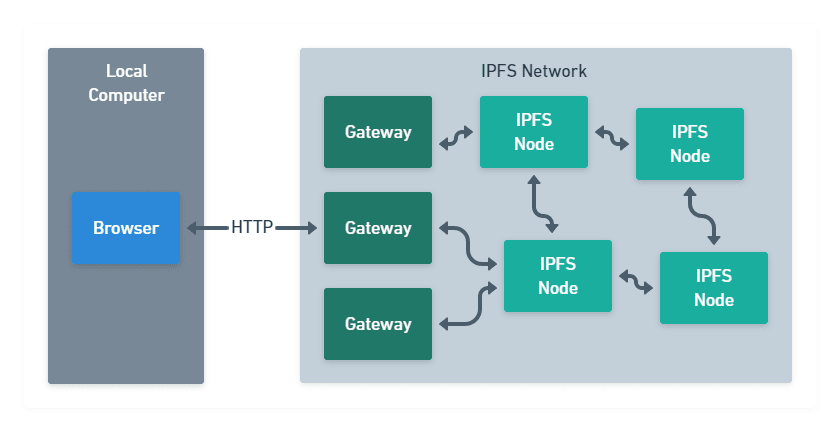 You could even run your own IPFS node locally and tell it to pin your content there. Your computer would become part of the IPFS network, and other IPFS nodes in your local network could fetch their data from there. 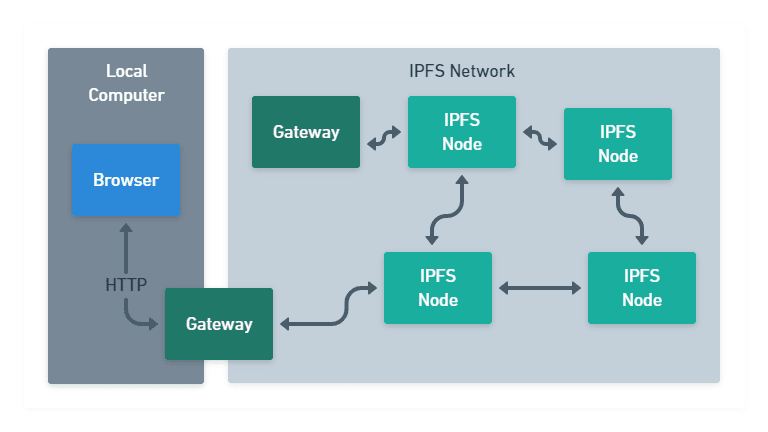 Finally, the big moment. First, we have to build the React app, which will end up in the build directory, then we have to call our script to deploy it.

Everything from the build directory will be accessible via the URL logged in at the end.

The CID will change every time we do a new deployment.

Now, requiring your users to remember these big CIDs isn't good UX, nor will they know when there is a new CID after every deployment.

This is why we put a human-readable domain in front of our deployments.

You can do so by creating two records for the custom domain you own.

An A or Alias record that points to a gateway IP or domain:

A TXT record called _dnslink that has the following content:

Your domain resolves to a gateway that can use the _dnslink record/subdomain to resolve the data stored on IPFS. Users can open the deployed page in their browser like every other website.

Using decentralized technology isn't hard and doesn't require getting a wallet and cryptocurrency to start, not for yourself or your users.

With Radicle and IPFS, you get some decentralization benefits, like censorship resistance, without the need to go all-in.

You can run Radicle and IPFS nodes on your own hardware, in your own local networks, if you like, and other people can host your content if they think it's worth it. No single entity can delete your data from those networks.

An Overview of the Solana Blockchain and its Ecosystem

What I've Learned after one month in the NFT world