A common pitfall I see programmers run into is putting way too much stock into Big O notation and using it as a rough analog for overall performance. It’s important to understand what the Big O represents, and what it doesn’t, before deciding to optimize an algorithm based purely on the runtime complexity.

Big O notation is a commonly-used notation in the field of complexity. Roughly, saying that an algorithm is O(f(N)) means that for an input of size N, the overall time taken will grow at a rate that is at worst f(N).

Or, in other words, if you zoom out on the graph of time-taken by an algorithm, you can overlay a curve of f(N) that is scaled in some way such that the time taken by the algorithm will always be underneath that curve.

The way I learned it (which is slightly different than the formulation given on Wikipedia) is that f(x) is O(g(x)) if there are some values k and C such that f(x) ≤ k∙g(x) for all x ≥ C.

What does being “big-O something” tell you?

If a function is O(N), then it means that for a sufficiently-large input of size N, if you double the input then it will take roughly 2N as long to execute.

Similarly, if it’s O(N²), then for a sufficiently-large input of size N, if you double the input then it will take roughly 4N as long to execute.

It allows you to sort various algorithms based on their overall complexity class; whatever term is most-dominating in an algorithm is what will eventually dominate in terms of runtime, for a sufficiently-large input. If your algorithm has two phases, one that’s O(N) and one that’s O(N²), then over the long term, for a sufficiently-large input, the O(N²) portion will dominate in terms of runtime, and so the algorithm as a whole is O(N²).

Oh heck no. Remember, these are just expressions of the dominant factor over long-term increases.

Bubble sort is O(N²) so we should never use it, right?

Well, not necessarily. If you’re only ever sorting small arrays – like on the order of 10 elements or so – it can quite likely be a lot faster than something like merge sort or quicksort. (Incidentally, quicksort is also O(N²) by a strict definition; the average case tends towards O(N lg N) but that’s assuming pivot selections that cut your sets in half every time. And doing a perfect pivot selection turns out to be really hard.)

Remember, O only describes the long-term growth of an algorithm. For an extreme example, trying to find a string that generates a specific fixed-size hash (colloquially called “reversing a hash” but that’s also a terrible misnomer) is O(1) – after all, the search space is always a constant size. There will only ever be 2¹²⁸ possible md5 hashes, so all you have to do to find a string that produces a particular md5sum (given no other inputs) is iterate over every 128-bit number represented as strings, right?

For a more practical example: general-purpose comparison-based sorting is provably only ever going to be, at best, O(N lg N). But there are actually sorting algorithms that execute with lower complexity; for example, radix sort can be implemented to take only O(N) time, at least given a fixed maximum key size. So, why don’t we always use radix sort when possible? Because in the general case, it’s hecking slow. It just happens to appear to scale very nicely.

For example, here’s a graph of std::sort vs. a radix sort using both a 4-bit and an 8-bit radix, for various input sizes; consider that regardless of radix size, radix sort is O(N) while std::sort is O(N lg N): (source code, raw data) 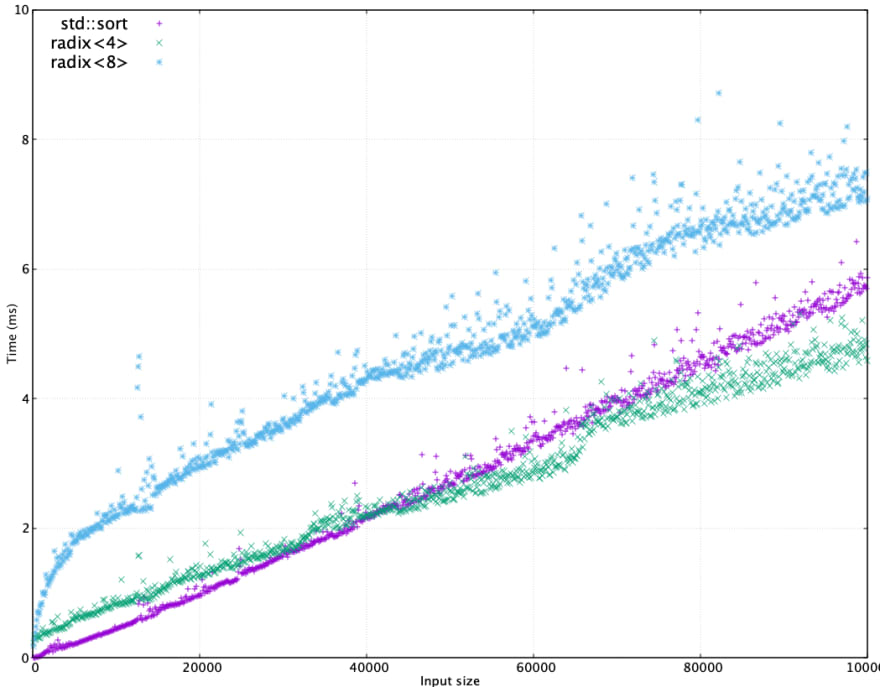 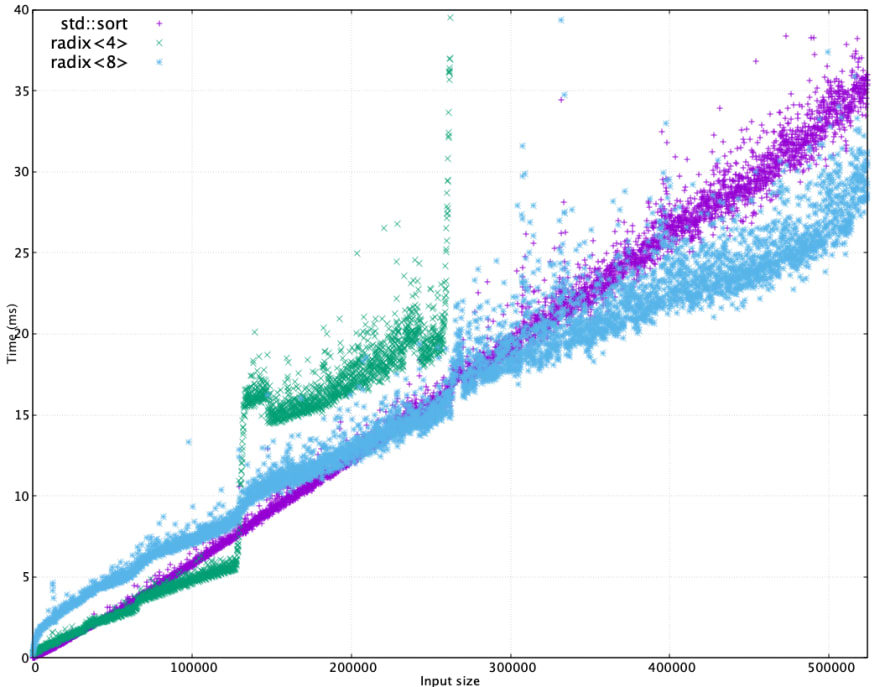 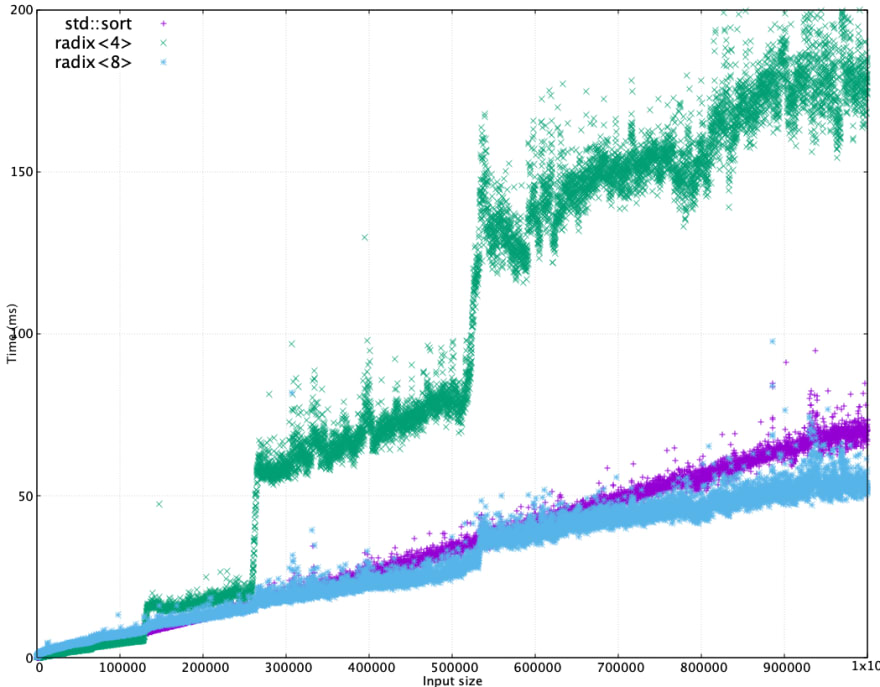 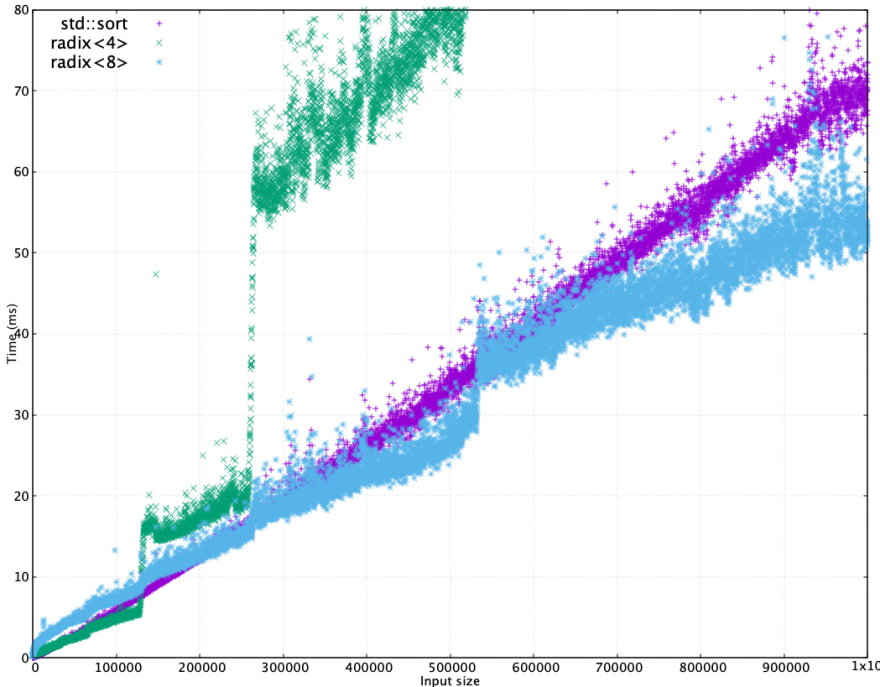 And it only gets worse since radix sort has various time jumps up around certain power-of-two boundaries; this is because as the buckets get bigger, more allocations (and reallocations) need to occur as they hit power-of-two boundary sizes, as well as the various cache thrashing that occurs as a result. This also reflects the fact that radix sort also requires a lot more memory than a comparison sort; radix sort can take up to two times the size of the input array in addition to the input itself, whereas the comparison sorts generally do as much in-place as possible.

The bucket-size overhead of 4-bit radix also makes it scale up much more quickly than 8-bit, and after a certain point it’s not even worth looking at the 4-bit radix time since it’s so much slower. But at least it scales linearly! Maybe after a few billion numbers it’ll start to beat std::sort again.

And yes, std::sort does scale with N lg N, and radix does scale linearly: 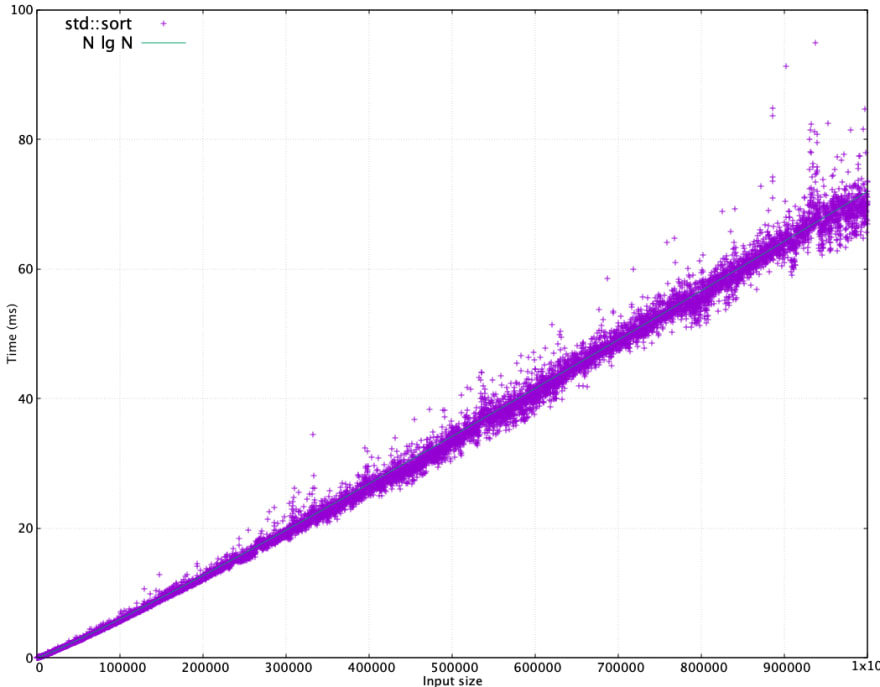 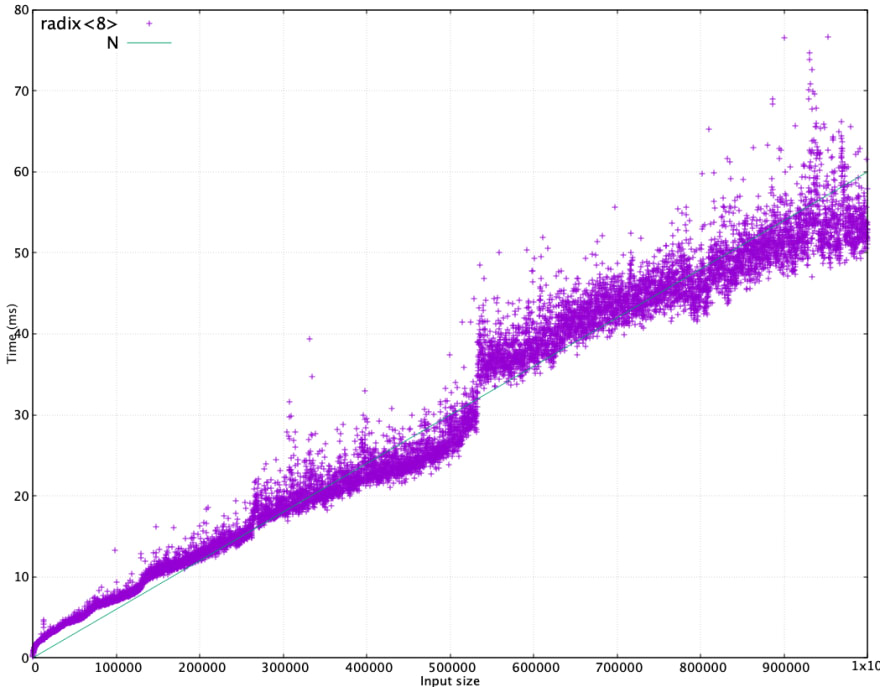 Another thing to note is that the lower-big O algorithms tend to also be much more complicated to implement and maintain. std::sort is literally one line of code; my radix sort implementation is 15 lines just for sorting numbers, without comments, and using an algorithm that doesn’t make intuitive sense to most people.

A general rule of thumb is that the more lines of code you’re implementing yourself, the slower it’s likely to be in the common case, and the worse it is to maintain. Standard library implementations and idioms exist for a reason. Sure, it isn’t always the case that shorter code will be faster (after all, bubble sort is easily done in around 5 lines of code but is way worse than radix sort, performance-wise) but why implement something that at best only slightly improves performance while taking on extra maintenance burden?

This gets even more extreme in scripting languages like Python; an idiomatic sort of a list in Python is just sorted(input) and goes through mostly-native code, which has been optimized to bits by compilers or even going through standard library functions. Implementing your own sort, no matter how efficient, is going to still go entirely through the Python interpreter.

I hope that rather than worrying only about the theoretical computational complexity of an algorithm, you’ll consider using it as a guideline for implementation and pay more attention to the practical performance.

A first look at Qwik - the HTML first framework

Death by Closure (and how Qwik solves it)