Warning! WebWindow is experimental technology by Steve Sanderson to host Blazor WebAssembly applications in desktop windows using local browser’s web view. Right now it’s not even sure if WebWindow makes its way to official codebase of Blazor. Play with it, but don’t go live with it yet.

What I tried to do was architecture like shown on the following screenshot.

Blazor WebAssembly application is implemented as a shared library that contains user interface artifacts like pages, layouts and code-behind files. Also it is possible to host shared interfaces in this project.

WebWindow and ASP.NET Core based web server projects are just for building application for target environment and configuring dependency injection to use implementations for given environment. 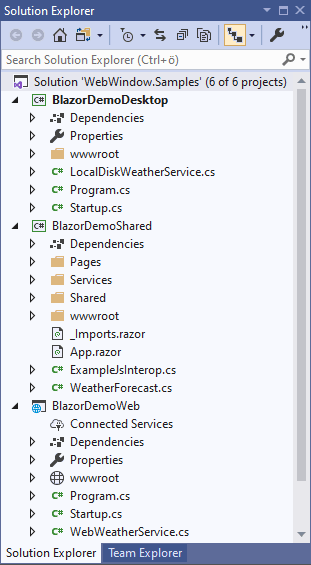 After moving all user interface files to shared project and deleting these files from applications projects I finished up with projects like shown on screenshot. wwwroot folder is necessary as there are static files needed by application. Most important one is index.html as it is different for both applications.

Screenshot clearly shows how applications projects have only wwwroot folder (later more about it), Program and Startup classes and implementation of weather data service. Notice that I managed to move also App.razor to shared project. As application projects doesn’t have any user interface components then I got rid of _Imports.razor files too.

NB! There’s one issue – static assets in shared library are not supported by Blazor on desktop. When publishing these applications we can copy static assets from wwwroot of shared project to desktop application publishing folder. It’s hack, yes, but don’t forget we are messing with pre-alpha and beta level tooling.

It’s important to see what’s the difference between desktop and web application. I tried first to make total hybrid application – one application running wherever you want, but it turned out to be task over my skills.

First and most important difference is in project file definition – applications use different project SDK.

Here are Program and Startup class of desktop application.

Let’s compare these two with ones from web application project.

There are also small differences in index.html files. Let’s start with desktop application.

With these minor things differences end. Application and its user interface is living in shared project. In both cases application looks the same. 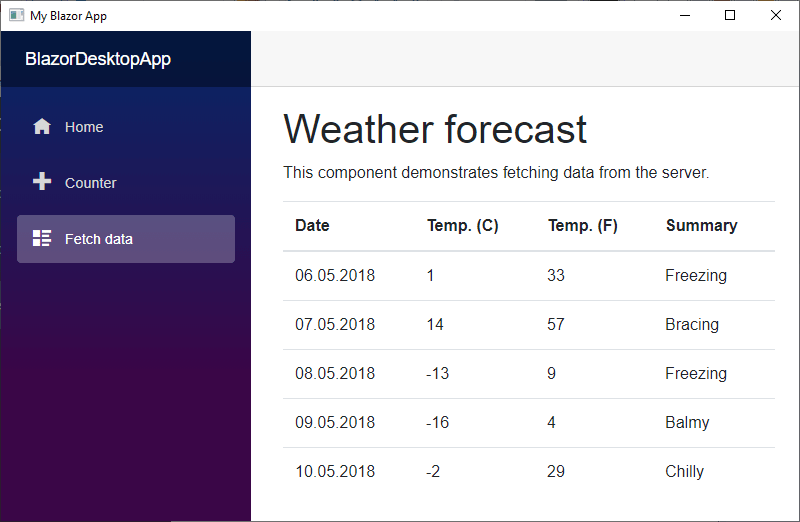 Instead of publish folder with many files I got something really small.

Although not all things work like they should, I was still able to build kind of hybrid Blazor WebAssembly application. User interface is in shared component library and application projects are there to build and publish application for target environment or platform. Suprising moment was that assembly trimming works like charm with Blazor desktop applications and all I have to try out now is to buid a simple installer. Blazor WebWindow is in pre-alpha but already damn powerful toy to play with.

Pros and Cons of Using JavaScript Interop in Blazor

OData without Entity Framework in ASP.NET 6.0 and performing CRUD operations