In 1995, McArthur Wheeler robbed 2 Pittsburgh banks at gunpoint in broad daylight, wearing no mask and turning to smile at the security cameras. When - not surprisingly - the police turned up later at his house to arrest him, his reaction was one of amazement - he was convinced the camera footage must have been doctored. "But I wore the juice", he muttered.

Wheeler was not insane - he was just suffering from cognitive bias. He believed that since lemon juice could be used as invisible ink it must confer the property of invisibility to anything it coated, so he smeared it on his face before entering the banks so the security cameras would not be able to photograph him.

This case prompted scientists David Dunning and Justin Kruger to investigate the effect whereby people tend to estimate their own abilities to be higher than they actually are. The results of their research are now known as the Dunning-Kruger effect.

The Dunning-Kruger effect - cognitive bias - has little to do with intelligence or stupidity but is associated with very low levels of expertise. For example, 80% of drivers believe themselves to be better than average - a statistical impossibility. And contestants on national TV talent shows believe they are exceptional singers when in truth they can barely hold a note.

Software engineering is not immune to this effect; we have all come across programmers with wildly inflated estimates of their own abilities. The less is known about a given task the more likely it is that over-confident claims will cause it to run over time and budget or not work at all once delivered.

There's a second part to the Dunning-Kruger effect that gets less attention, based on the following graph: 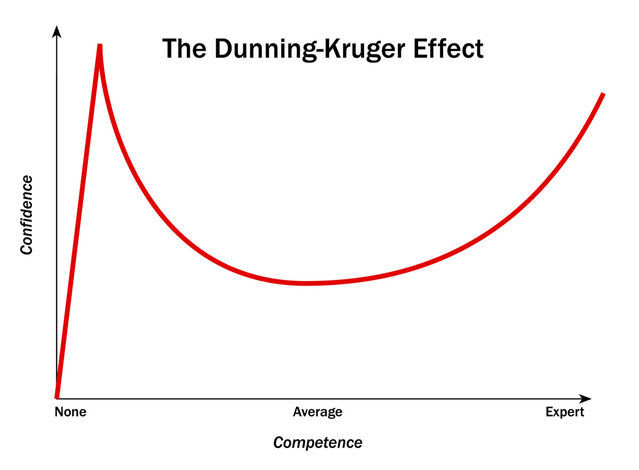 In his recent Dev.to article How My Terrible Memory Makes Me a Better Developer, Devon Campbell explains how having a terrible memory encourages better programming practices - most notably efficient and comprehensive documentation. While I suspect his memory is probably no worse than the rest of us, the points made are both interesting and highly relevant.

Without explicitly saying so, Devon's article neatly highlights the second part of Dunning Kruger, which is that as people become more expert in a subject they tend to under-play their own abilities. If you or I find something to be easy or self-evident we tend to assume that others also find it equally easy or self-evident. A moment's thought should reveal this reasoning to be highly suspect, but for many of us it's hard to accept that we really are the experts and that others don't even come close.

The graph shows that ignorance is accompanied by absolute certainty but knowledge qualifies itself. An ignorant person, who doesn't know what he doesn't know, is often 90-100% confident that something is so, but an expert will give himself some leeway and claim only 70% certainty. 90% is better than 70%, right? So who is the majority going to listen to - the one who is certain or the one who acknowledges he doesn't have all the answers?

This is most visible in politics; for example in the UK's ongoing Brexit saga, where those wanting to leave speak with certainty but rarely present any coherent arguments as to what precise benefits will accrue, whereas those wishing to stay use words like "may" and "should" when positing scenarios they claim will follow. This same distinction can easily be seen in the press; you only have to look at the utter conviction expressed in one newspaper and compare it to the nuanced argument presented in another.

As for software engineering, where does all this help us? For one thing, we should all place ourselves somewhere on the Dunning-Kruger graph and then behave accordingly. As I said above, when you don't know much at all it's hard to know how much knowledge you are lacking, so an important action is to go on learning. Don't just assume that having found the answer to one problem it will apply to all. Also, try to avoid conveying certainty. It's not a failing to be circumspect; after all, it's something that marks out experts. People who are always sure of themselves may fool the general population but they shouldn't be able to fool us with more experience.

And if you really are an expert, accept the fact. No false modesty, please. It's not obnoxious to be right as long as you don't put others down in the process. Learn to really judge how good you are compared to others.

One purely practical piece of advice concerns the phrase "read the code", which is too often used to dismiss an inquiry coming from someone who has been unable to find adequate documentation. Those who come after you may be able to read code or they may not - it isn't a universal skill. If you have it you are most fortunate, but many others - myself included - find it extremely difficult and rely on documentation to point the way. By omitting documentation you are closing the door of understanding to anyone with less ability than yourself - before you even consider the advantage you had in being the author of that code.

Photo by Joao Tzanno on Unsplash

Do you have the time..

Why I cannot emulate a serial device (arduino or somethin else) using socat?

Once suspended, gtanyware will not be able to comment or publish posts until their suspension is removed.

Once unsuspended, gtanyware will be able to comment and publish posts again.

Once unpublished, all posts by gtanyware will become hidden and only accessible to themselves.

If gtanyware is not suspended, they can still re-publish their posts from their dashboard.

Once unpublished, this post will become invisible to the public and only accessible to Graham Trott.

Thanks for keeping DEV Community safe. Here is what you can do to flag gtanyware:

Unflagging gtanyware will restore default visibility to their posts.