Remainder and Modulo are two mathematic operations that are highly used in programming and computing in general. They both are represented by %, but they act differently, their differences are usually overlooked, but they are really important as now knowing the differences between the both might cause production bugs in an application. 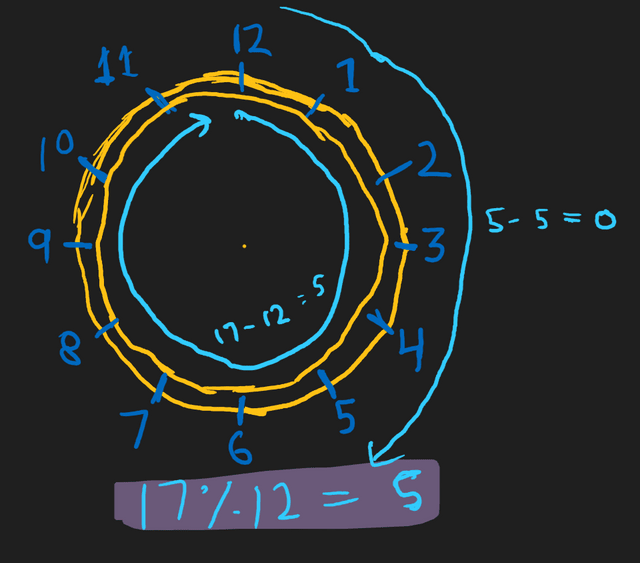 As shown in the diagram above, you first took a cyclic turn around the clock which accounted for dividing the dividend by the divisor 12. After a cyclic turn, you are left with 5 so you go forth 5 places, and 5 is the answer of 17 % 12. The Modulus operator would work the same way except that it would act differently when one of the operands is negative.

As proved earlier using clock math diagrams, 17 % 12 would result in 5 as the remainder. 17 % -12 would also result in the result being 5 as after one oscillation around the clock, 5 would be the answer. What about 17 % -12 using a modulo operator? We would need to use a different type of clock to depict the calculations.


So in modular mathematics, a clock hand's clockwise turn always increments the number of hours(value). So for carrying out 17 % -12 we would need a clock that increments the negative number -12, and it would look like this: 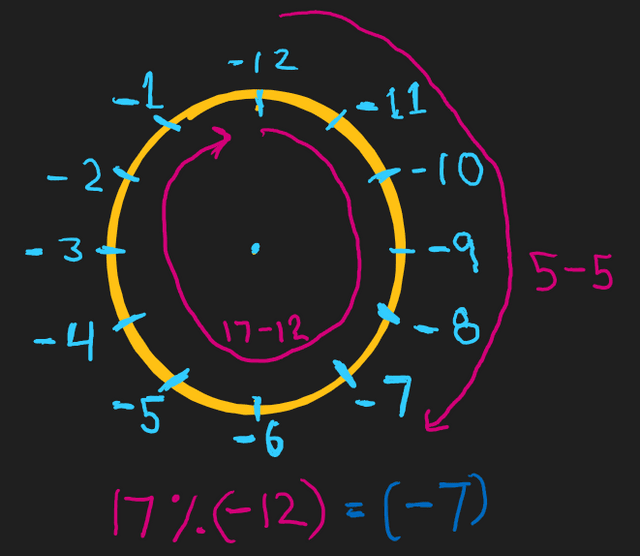 In the above figure, the clock is turning clockwise and the number is being incremented, so after a whole oscillation around the clock, we would have 5 left as the remainder, but we are using modulus so we will move the clock hand 5 steps further which results in the result being -7.


The dividend could also be a negative number with the divisor being positive. You would similarly solve that. Suppose -14 mod 12, so when we represent this on a graph, it would look like this: 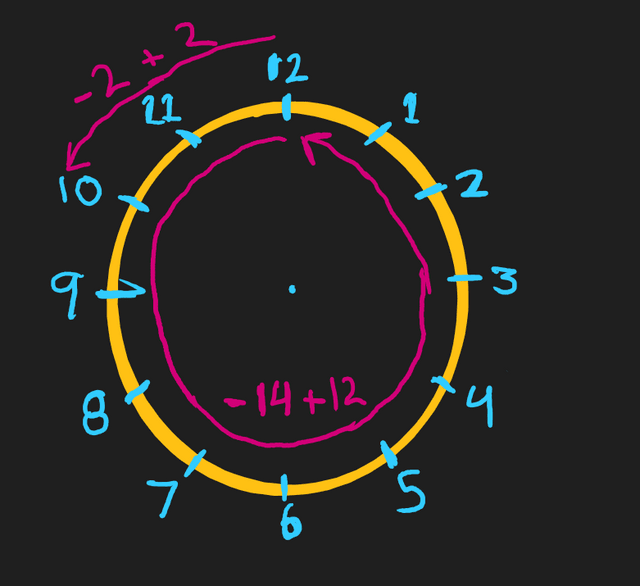 A point to be noted is that the clock is only shown because the divisor in all the operations is 12, you would not be able to represent an operation with some other remainder on a clock with 12 positions.

Where can this knowledge be used

What's the most effective way to debug a complex program written in Java?

I want to improve my coding skills, but I don't know where to start. Can anyone offer advice?

Once suspended, hamiecod will not be able to comment or publish posts until their suspension is removed.

Once unsuspended, hamiecod will be able to comment and publish posts again.

Once unpublished, all posts by hamiecod will become hidden and only accessible to themselves.

If hamiecod is not suspended, they can still re-publish their posts from their dashboard.

Once unpublished, this post will become invisible to the public and only accessible to Hargunbeer Singh.

Thanks for keeping DEV Community 👩‍💻👨‍💻 safe. Here is what you can do to flag hamiecod:

Unflagging hamiecod will restore default visibility to their posts.