Rust is a programming language ( general purpose) C-like, which mean it is a compiled language and it comes with new strong features in managing memory and more. The cool thing ! rust does not have a garbage collector and that is awesome 😅 .

In short, Devops is the key feature that helps the dev team and the ops team to be friends 😃 without a work conflicts , It is the ART of automation. It increase the velocity of delivering a better softwares !

we can make a lot of things with rust like web apps , system drivers ans much more but there is one problem which is the time that rust takes to make a binary by downloading dependencies and compile them.

The cargo command helps us to download packages ( crates in the rust world) , The Rustc is our compiler. Now we need to make a pipeline using the Gitlab CI/CD and docker to make the deployment faster.

This is our challenge and the Goal of this article ! 👊

The Dynamic linking uses shared libraries , so the lib is loaded into the memory and only the address is integrated into the binary. In this case the libc is used.

The Static linking uses static libraries which is integrated physically into the binary, no addresses are used and the binary size will be more bigger. In this case the musl libc is used.

You want to know more ? Then check this : click here.

The CI/CD pipeline is a set a steps that allow us to make :

In this article i will focus on the build stage because in my opinion it is very sensitive phase and it will affect the “Time to market” approach !

So the first thing is to optimize the size of our docker images to make the deployment faster. Before we begin, i will use a simple rust project for the demo. 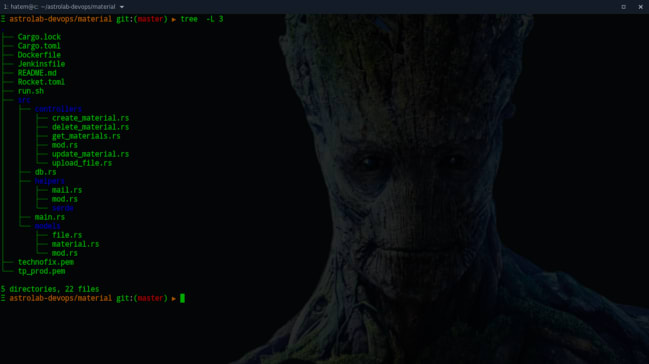 We will begin by building the app image locally , so let’s see how the docker file look like :

This Dockerfile is splitted into two sections :

The builder section:
In order to use rust we have to get a pre-configured images that contains the Rustc compiler and the Cargo tool. the image have the rust nightly build version and this is a real challenge because it’s not stable 😠.

We will use the static linking to get fully functional binary that doesn’t need any shared libraries from the host image !!

Until now we only build the dependencies in Cargo.toml and we make the clean ( removing unnecessary files)

The builder stage has complete ! congrats 😙 🎉 yeah !!. Now let’s use alpine as a base image to get the binary from the build stage , but ! wait a second ! what is alpine ???

Alpine is a Linux distribution, it’s characterized in the docker world by his size ! it is a very small image (4MB) and it contains only the base commands (busybox)

You know how to build a docker image right 😲 ? okay 😃

After testing the image locally, it seems good 😃, we resolve the docker image size, but in CI system the velocity is very important than size !! so let’s take this challenge and reduce the compilation time of this rust project !!

let’s look at the .gitlab-ci.yml file ( our CI configuration):

There is a tip in this file , i just splitted the docker file into two stages in this .gitlab-ci.yml :

For the CI work i prepared a ready-to-use docker image that contains all i need to make a reliable and fast pipeline for rust project , this image is hosted in my $docker hub .

This image contains the following packages installed and configured :

Let’s breakdown the code and understand what’s going on !!

In the first job : prepare_deps_for_cargo we need our base image hatembt/rust-ci .

In this job some setting are required to make a successful build are placed in the before_script:

Now all thing are ready ! so let’s make the build in the script section, you are already now what we should do 😃 , let’s skip it 👇.

The cache and artifacts sections are very important ! its saves the data under :

To know more about caching and artifacts flow this link.

All data that is created in the first run of the CI jobs will be now saved and uploaded to the Gitlab coordinator. On the next build (new codes are pushed), we will not start the build from scratch, we just build the new packages , the old data will be injected with <<:*caching_rust after the image keyword.

let’s move on the next JOB : build_docker_image:

I made a new Dockerfile for the docker build stage, it’s based on the alpine image and it contain only the binary from the previous stage.

First we need a docker in docker image (dind) → to get the docker command and let’s make the steps below:

The image size is : 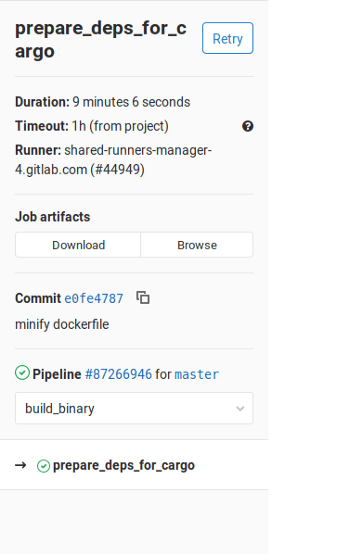 NB: the time is for the hole build time , the build binary and docker_build stages.

This is the power of Devops, the art of automation with some philosophy in the configurations and the steps to flow we can make even better than these results.

In business the velocity ,the quality and the necessary features (on the application) are very important to Bring the company on the hight levels of success → this is the successful Digital transformation.

Finally, i hope that this Story helps you to move on to next steps in the CI/CD systems, you can apply these ideas into any language (mostly complied languages, but still the same steps). If you have any feedback or critiques, please feel free to share them with me.

A quick glance at the Kubernetes Gateway API

Once suspended, hatembentayeb will not be able to comment or publish posts until their suspension is removed.

Once unsuspended, hatembentayeb will be able to comment and publish posts again.

Once unpublished, all posts by hatembentayeb will become hidden and only accessible to themselves.

If hatembentayeb is not suspended, they can still re-publish their posts from their dashboard.

Once unpublished, this post will become invisible to the public and only accessible to hatem ben tayeb.

Thanks for keeping DEV Community 👩‍💻👨‍💻 safe. Here is what you can do to flag hatembentayeb:

Unflagging hatembentayeb will restore default visibility to their posts.