What is Duke? No one knows his species or genus. People say he’s a Java Bean or a Software Agent, but all we know for sure is that he reminds us of the more than twenty-year legacy of the Java language and its community. The Java community has such an affinity for Duke that designers have created surfing Duke, astronaut Duke, rockstar Duke, macramé Duke, and of course Heroku’s Samurai Duke.

But how can all of these Duke variants exist without violating copyright or trademark laws? After all, Duke represents the language at the middle of one of the fiercest copyright battles in the history of software. The answer, it turns out, can teach us a great deal about how to nurture an open source community.

Java’s history is filled with ups and downs, rights and wrongs, plaintiffs and defendants, and a whole lotta XML. And just as those who don’t read history are doomed to repeat it, learning about Java’s past might help you grow the communities and products you contribute to--even if you’re only reading about a mascot.

Duke was created in the earliest days of Java by Joe Palrang, an artist who helped animate films including Shrek and Over the Hedge. At the time, Duke was the property of Sun Microsystems and was as proprietary as Java itself. But Duke was poised to lead Java’s charge into a brave new world.

In 2006, Duke was open-sourced under a BSD license, which coincided with the release of the Java HotSpot virtual machine and compiler under the GNU GPL license. This was the first subset of a truly open source Java, and Sun Microsystems promised that the rest of the JDK would be released under the GPL within the next year. Duke, already the mascot for Java, became the herald of a new future where Java could be freely distributed--just like Duke could be freely customized by designers.

A completely free and open source Java may seem inevitable today, but fifteen years ago there was no certainty in the matter. Sun was struggling to make money despite producing some of the most innovative technologies in the industry, and giving their most successful product away for free seemed unrealistic.

As the decade came to a close, Sun was acquired by Oracle and the first Java release under new ownership, JDK 7, was also the first in which the reference implementation was free and open source under the GNU GPL License. Today, there are multiple OpenJDK distributions and the open Java ecosystem is thriving--along with Duke.

That’s why Heroku, who has always supported a freely distributable version of OpenJDK, knew exactly where to look when it needed a logo for its Java product. 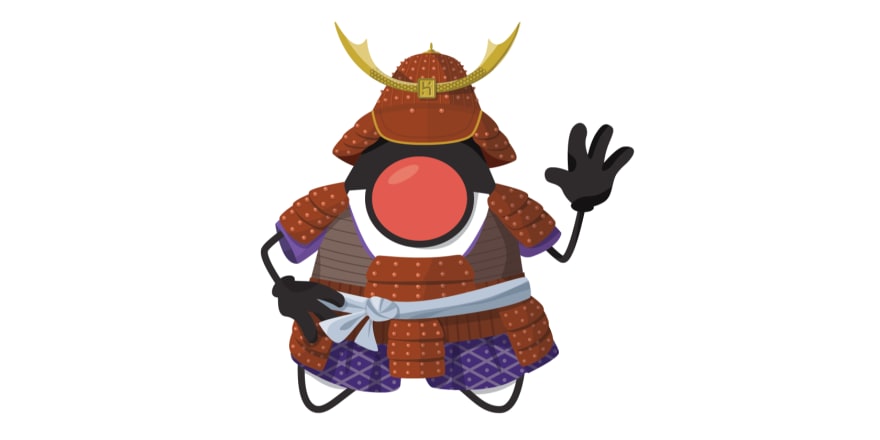 The Way of Samurai Duke

Actually, Duke was not Heroku’s first choice for a logo (sorry Duke). The story of how Duke became a Samurai is shrouded in mystery, intrigue, and lawyers.

The famous Java coffee cup with steam rising from it (which we are not allowed to show here) was the first logo Heroku tried. But our lawyers informed us that we were violating Oracle’s license on that image.

For once, lawyers did us a favor. By taking the coffee cup option away, they forced us to think harder about what Heroku Java should look like.

We thought of Duke, but a plain-old naked Duke just wasn’t exciting enough for Heroku’s standards. We decided to dress him up and in classic Heroku style, so we gave him a Samurai outfit. Initially, Samurai Duke had a samurai sword in his belt, but our corporate team informed us that it was too violent and had to be removed. The end result is a cute, non-violent Samurai Duke, whom we love.

Heroku has long been the ally of a free and open Java and the OpenJDK project. Samurai Duke is our metaphorical protector of that freedom. The next time you see Heroku at a conference, be sure to say hello and ask for one of our Samurai Duke stickers. Or grab a copy of our Samurai Duke wallpaper. You’ll be helping us celebrate Java and open source.

What is Java? Definition, Meaning & Features

Once unpublished, this post will become invisible to the public and only accessible to Joe Kutner.