Cryptography - the practice and study of techniques for secure communication in the presence of third parties. Also known as crypto and cryptology.

Cipher - an algorithm for performing encryption or decryption.

Encryption - a process of encoding messages or information in a form that only authorized parties can read it.

Decryption - a process of converting messages or information from ciphertext to plaintext.

Random Number Generator (RNG) - a device designed to generate a sequence of numbers that lacks any pattern.

Key - a parameter that determines the functional output of the cryptographic cipher.

Digest - the output of the hash function.

Symmetric Algorithm - an algorithm the uses the same cryptographic key for both encryption and decryption.

Asymmetric Algorithm - an algorithm the uses different cryptographic key for both encryption and decryption. Also known as public-key algorithms. 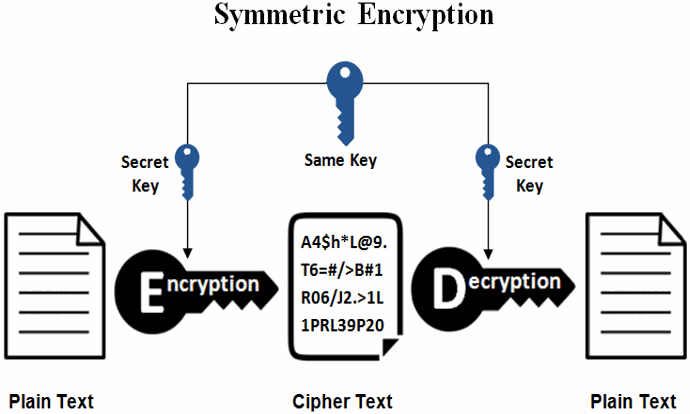 There are two types of symmetric encryption algorithms:

In modern cryptography, DES was the first standardized cipher for securing electronic communications. Due to the processing power of modern computers, DES is not used anymore as it is considered weak. It can be used in variations as 2-key or 3-key 3DES.

This is the standard set by the US National Institute of Standards and Technology in 2001 for the encryption of electronic data. It supersedes DES which had been in use since 1977. AES has various forms, depending on the key length. They are abbreviated as AES-128, AES-192 and AES-256 where the last number is the key length in bits.

RC4 stream chipher has been used in various protocols including Wired Equivalent Privacy (WEP) and Wi-Fi Protected Access (WPA) as well as in Transport Layer Security (TLS). However, due to some vulnerabilities discovered in 2015, it usage started to decline. RFC 7465 prohibits the use of RC4 in all versions of TLS. 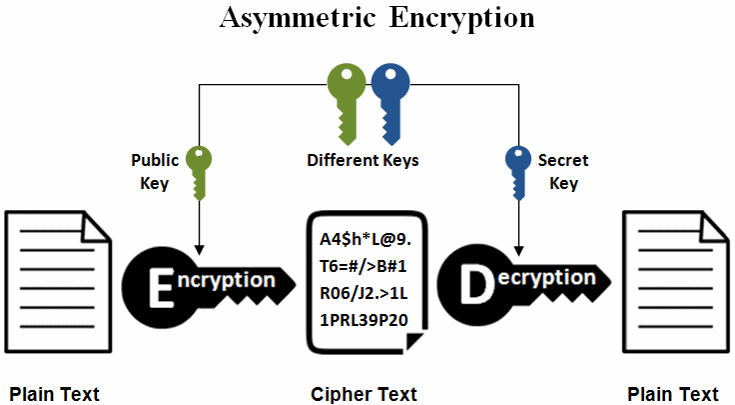 Stream and block terms are not usually used with asymmetric ciphers. That said, public-key encryption also encrypts blocks of data. For example, RSA where block sizes are based on the key size.

One of the oldest and most widely used asymmetric algorithms. It is based on the fact that if you multiply two giant prime numbers it is almost impossible to derive the original primes from the result. In fact, there is a published research claiming that it would take around 1500 years of computing time to crack 768 bit RSA key!

In short, this comparison is more about the cost of an elementary operation (encryption and decryption) than anything else. It would be prohibitively expensive to do asymmetric encryption for large amounts of data. Symmetric keys give you cheap computation but the problem of a shared secret. Public keys give you expensive computation but easily shared information needed to communicate securely.

The effect usage of these algorithms come from creating another layer of abstraction. In other words, a researcher will have to build a system using these ciphers as primitives.

Key encryption - use public key cryptography to encrypt a symmetric key generated on the fly. It is expensive operation, but you only do it once.

Data encryption - use the symmetric key to encrypt and decrypt the actual data. It is a much cheaper operation.

These algorithms are commonly used to verify information integrity or store some types of sensitive data, like passwords. Why passwords? Because the same hash function will always yield the same hash for the same input. Therefore any attempted password can be hashed and the result compared against the saved hash to verify an authentication attempt.

MD5 was released in 1992 and was also built as a successor to MD4, which was successor to MD2. MD5 isn't as fast as MD4 but it is considered to be more secure than the previous MDx implementations. Although it is true, MD5 usage should be avoided in any capacity, as previous research has demonstrated, it should be considered cryptographically broken and unsuitable for further use. It can still be used as non-cryptographic hashing algorithm.

It is a a family of cryptographic hash functions published by the National Institute of Standards and Technology (NIST) as a US Federal Information Processing Standard (FIPS), and includes the following algorithms:

SHA-1 - developed in 1993, and widely used in security applications and protocols, including SSL/TLS, PGP, SSH, IPsec, and S/MIME. SHA-1 produces a 160-bit digest and has a block size of 512 bits. Although SHA-1 is still widely used, cryptanalysts in 2005 were able to find vulnerabilities on the algorithm that detrimentally compromised its security. These vulnerabilities came in the form of an algorithm that speedily finds collisions with different inputs, meaning that two distinct inputs map to the same digest.

SHA-3 - the latest member of the SHA family of standards, released in 2015. SHA-3 is a subset of the broader cryptographic primitive family Keccak and internally varies greatly from SHA-1 and SHA-2. Although SHA-3 is a better algorithm, NIST does not currently plan to withdraw SHA-2 or remove it from the revised Secure Hash Standard.

7 Awesome Free APIs for Your Next Node.js Project

Once suspended, hi_artem will not be able to comment or publish posts until their suspension is removed.

Once unsuspended, hi_artem will be able to comment and publish posts again.

Once unpublished, all posts by hi_artem will become hidden and only accessible to themselves.

If hi_artem is not suspended, they can still re-publish their posts from their dashboard.

Once unpublished, this post will become invisible to the public and only accessible to Artem.

Thanks for keeping DEV Community 👩‍💻👨‍💻 safe. Here is what you can do to flag hi_artem:

Unflagging hi_artem will restore default visibility to their posts.