Well maybe the title is a tad misleading but it is true. Despite the huge range of countries that are represented within the fellowship I'm the only Irish student. 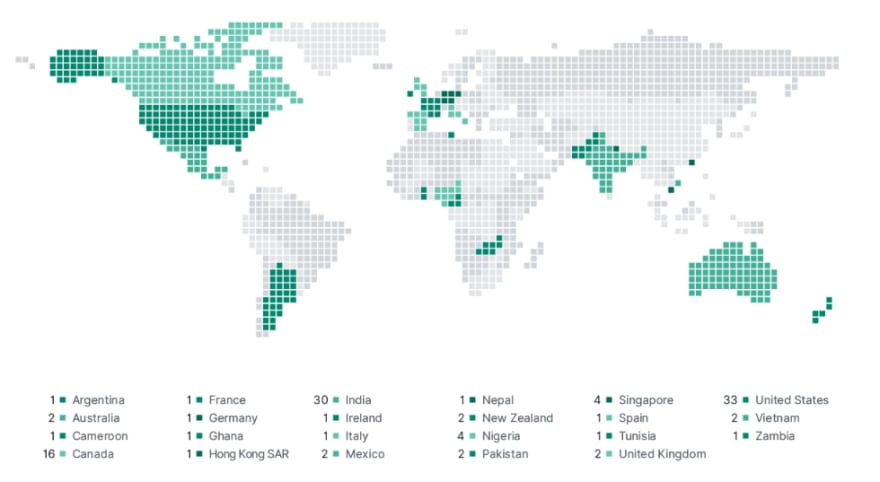 Before starting the MLH fellowship I had made hundreds of commits on github to various personal projects of my own and one major group project but I had never made a contribution to an open source project. Like many, I was quite intimidated and had no clue as to where would be a good place to start out. Diving into projects that were already used by hundreds or even thousands of users and had code bases that could fill up small books daunting to say the least.

I'm not really sure what made the idea that it was impossible to help out on these projects full of professional software developers disappear for me but that was one of the first things I realized wasn't true. There are plenty of little bugs and minor improvements to be made on any project and people are more than happy to review your pull request if you've put in the work to help improve the project.

Code reviews are one of my favorite parts of open source. As you work on your own and commit that less than ideal workaround without a second thought you might catch a small bug at a later date but chances are you don't bother reviewing anything once you git push origin and alt+f4 out of your editor play some CS:GO. Being able to get direct feedback on your code is priceless and it only helps you sharpen your skills, especially for people who've not even started their careers yet like us students.

Throughout my time in the fellowship I've contributed to a handful of projects including:

beego is an open-source, high-performance web framework for the Go programming language.


Beego is a high-performance golang powered web-framework. I've really enjoyed my time working with beego as it's been the first time working with a golang project that wasn't my own. I started contributing to beego about halfway through the fellowship so I didn't find it half as hard to dive into a project and start to help out on the huge list of existing issues.

I'm quite motivated to continue working on beego in my free time not only because I love go, but because I love to work on backend projects most of the time and being able to write the tools that people use to build their own backends is a dream come true for me.


Click was my first project that I started on in the beginning of the fellowship. I would've never thought that a python cli toolkit could be so complicated but I was blown away. I had always done my cli argument parsing by hand but I have seen the power of using tools like click and will certainly choose similar tools for my future projects.


Not related to the fellowship but I have been using this chrome extension for quite some time now and I noticed a particularly annoying ui bug on one of the team discussion elements when using the extension. A lot of people suggest that you should start contributing to open source tools that you use as an easy means to get started contributing to OS and I completely agree with this.

From cloning the repo to submitting my fix barely took half an hour and I was very please with myself afterwards. Waking up in the morning to my first ever merged pull request made me feel like a child on Christmas morning.

My Journey at the MLH Fellowship

Once suspended, iamcathal will not be able to comment or publish posts until their suspension is removed.

Once unsuspended, iamcathal will be able to comment and publish posts again.

Once unpublished, all posts by iamcathal will become hidden and only accessible to themselves.

If iamcathal is not suspended, they can still re-publish their posts from their dashboard.

Once unpublished, this post will become invisible to the public and only accessible to IamCathal.

Thanks for keeping DEV Community 👩‍💻👨‍💻 safe. Here is what you can do to flag iamcathal:

Unflagging iamcathal will restore default visibility to their posts.