I've been playing around with the WebAudio API. You can generate sounds from it. So I've built a synthesizer app with it as a weekend project. How hard can it be? 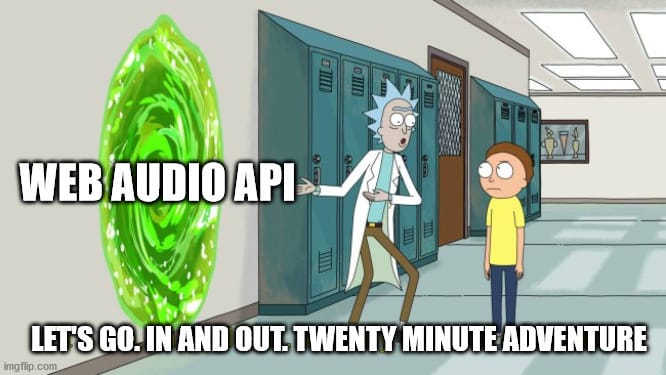 The API is built like an actual modular syntheizer. That came to me as a pleasant surprise. I've been experimenting with Pure Data a while back, so I know more or less how those things work. And now I can apply this knowledge to javascript. First, let's clear out the basics.

It all begins with an Oscillator. That's an electric device that emits a wave pattern in a defined frequency, generating a sound. Think of it as a physical device (because that's what it is in a modular synthesizer), or as the WebAudio API calls it - a node. That node has an input and an output. The input is the waveform and frequency, the output is the sound signal. That signal can now be connected to other devices. An actual synthesizer would have speakers as the last device in the chain, but the WebAudio API foregoes that. The last node simply acts as a speaker.

My oscillator is a very simple one. It supports the four basic waveforms (sine, square, triangle, sawtooth) and a frequency. The different waveforms generate different kinds of tones: A sine wave sounds a bit warm and soft, a sawtooth is more industrial and harsh. The frequency determines the pitch. 440Hz corresponds to the concert pitch A. Wikipedia has a full table of all the frequencies.

Next, I want some controls to further manipulate the character of my sound signal. Give it a more roomy tone, or a pluck, or a swell. On a real synthesizer, those controls are named envelope, Contour, or ADSR. That's short for Attack, Decay, Sustain and Release. 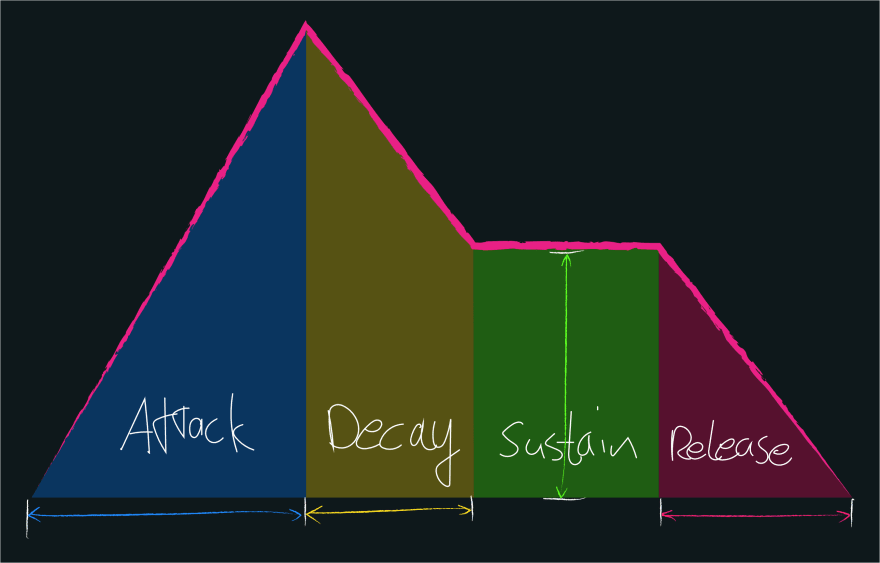 It's an established system to give a wide gamut of characteristics to a relatively simple signal, by manipulating its volume (y-axis) over time (x-axis). The four keywords stand for a specific aspect each:

There are some more specific envelopes and there are also lots of effects and methods to manipulate the sound further, but I'll do just fine with those four basic controls.

Here's a rough sketch of how the logic works.

Each audio node gets options to configure them. Pressing a key triggers the sound generation from the Oscillator and the subsequent steps Attack, Decay and Sustain. Letting go of a key triggers the Release step and then terminates the note.

What a pressing a key actually means, depends on the input device. Ideally, I'd wish for something like <input type="piano">, but realistically, I had to implement handlers for mouse, touch, and keyboard events myself.

So I wound up with a functional synthesizer. To top it off I added the usual PWA niceties, a logo and called it JSSynth:

Chrome puts a limit on how many oscillators can play simultaneously. On Windows and macOS that appears to be 50, but it's much lower on Android. Firefox does not place such a limit at all.

Safari doesn't include the AudioContext yet (but it's in TP for version 14), so this synthesizer won't work neither on Safari for macOS nor any iOS browser until they open their OS up for third party browser engines.

I think there's a bug somewhere in the release key mechanism because keys tend to get stuck when played frantically. Until I can be bothered to fix that, a reload is the only thing that helps.

Other than that, I think it turned out quite okay and a fun little project. Here's the app and the code. Let's jam!

Daniel Schulz
Hi! I'm a frontend guy.
The language that grew up with me
#webdev #css
Not knowing things
#webdev #watercooler
From Notion to Eleventy, but faster
#javascript #webdev #programming

Once suspended, iamschulz will not be able to comment or publish posts until their suspension is removed.

Once unsuspended, iamschulz will be able to comment and publish posts again.

Once unpublished, all posts by iamschulz will become hidden and only accessible to themselves.

If iamschulz is not suspended, they can still re-publish their posts from their dashboard.

Once unpublished, this post will become invisible to the public and only accessible to Daniel Schulz.

Thanks for keeping DEV Community 👩‍💻👨‍💻 safe. Here is what you can do to flag iamschulz:

Unflagging iamschulz will restore default visibility to their posts.