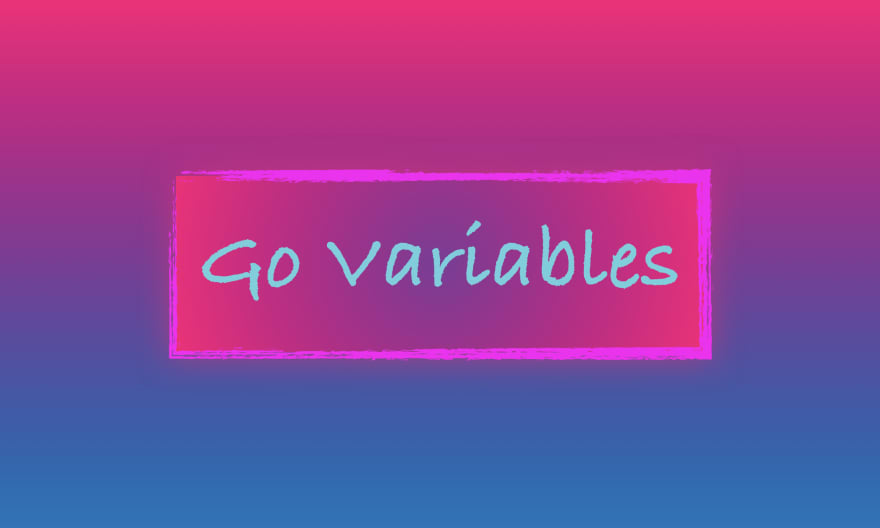 Go defines the variables as they read. Go is explicit and simple.

Instead of doing the arithmetic of Clockwise/Spiral Rule1 to read a C declaration, Go uses a simpler approach for us humans.

What is a variable in Go? 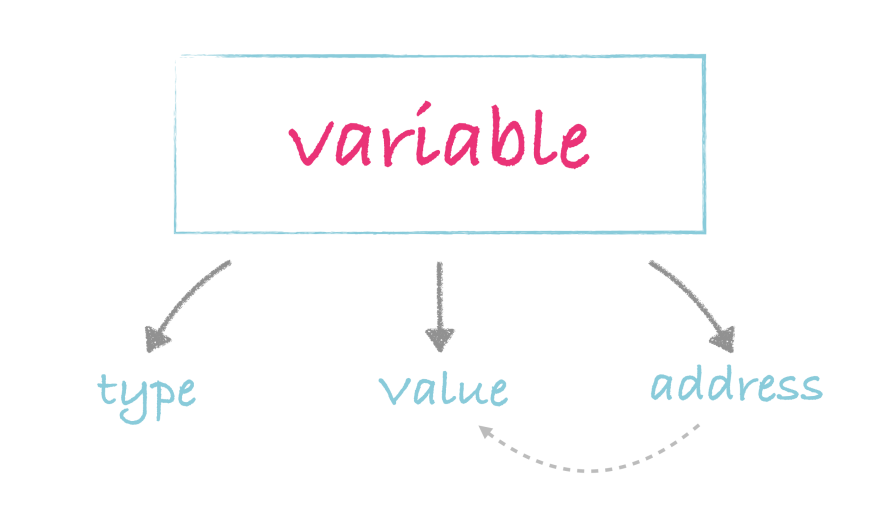 Type â†’ What kind of information can be stored inside the variable.

Value â†’ The stored value inside the variable.

Address â†’ Where the variable can be found in computer memory.

Why do we need variables?

Without variables, there would be only static-data in our programs that we can’t change. Variables let us do dynamic things, such as getting user feedback, and re-using the same value again.

How to declare a Go variable?

It’s better to talk about zero-values first. If you declare a variable without a value, then it’ll have a zero-value depending on the type of the variable. 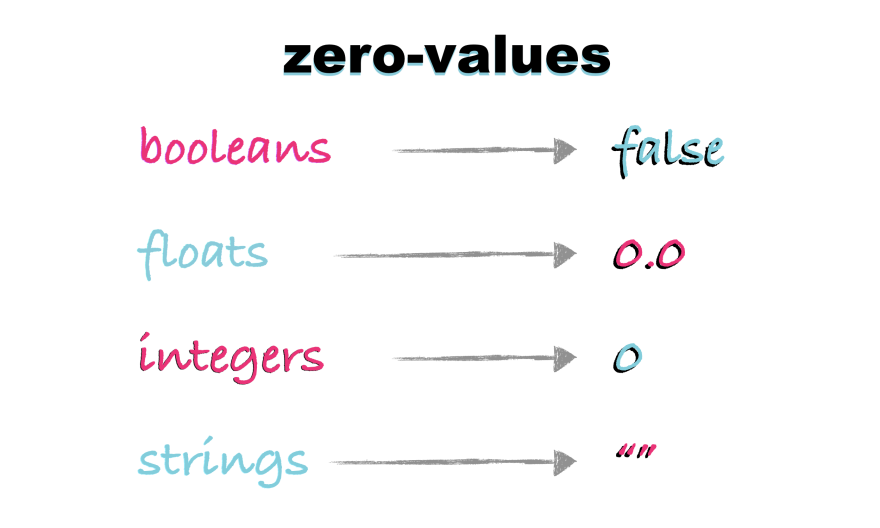 Left side gets right side’s values if not initialized. 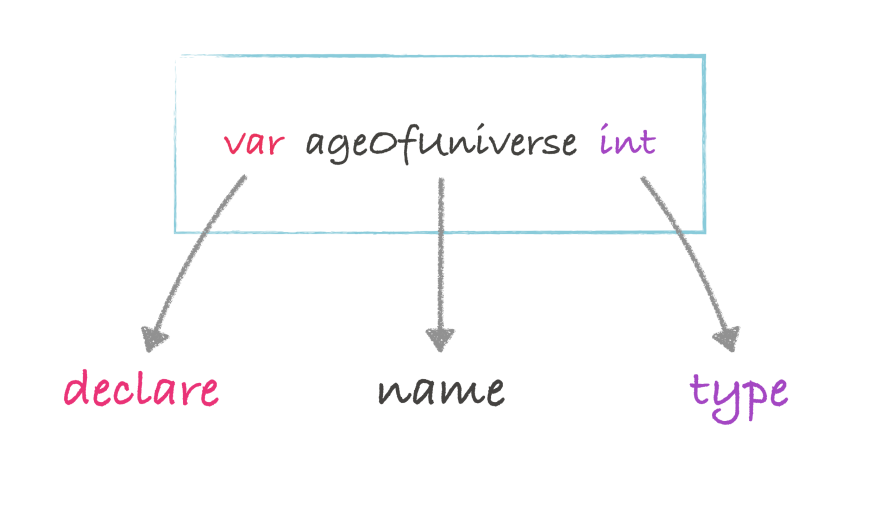 Declares a variable named ageOfUniverse with type of int.

Name can be anything including unicodes like Ï€, âˆ‘, âˆ«, but not this: ðŸ˜±. Its value is a zero-value of an int which is 0. 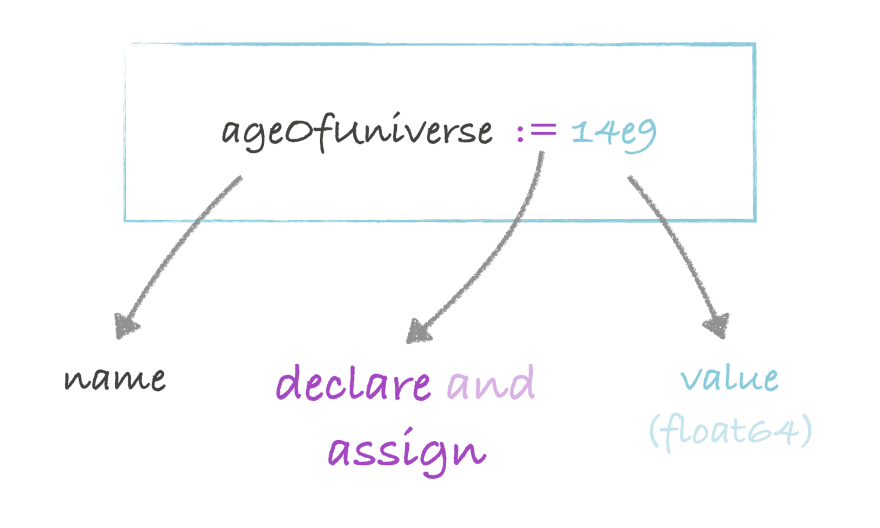 Declares a variable named ageOfUniverse and stores a value of 14 billions in the variable and guesses its type automatically (type-inferring).

The variable is declared and its value and type are assigned all together with := operator. When you use short declaration, Go will not use a zero-value assignment, obviously. ðŸ‘‹ Pascal programmers may remember :=.

ðŸ‘‰ For more info, you may read the Short Declarations Rulebook. 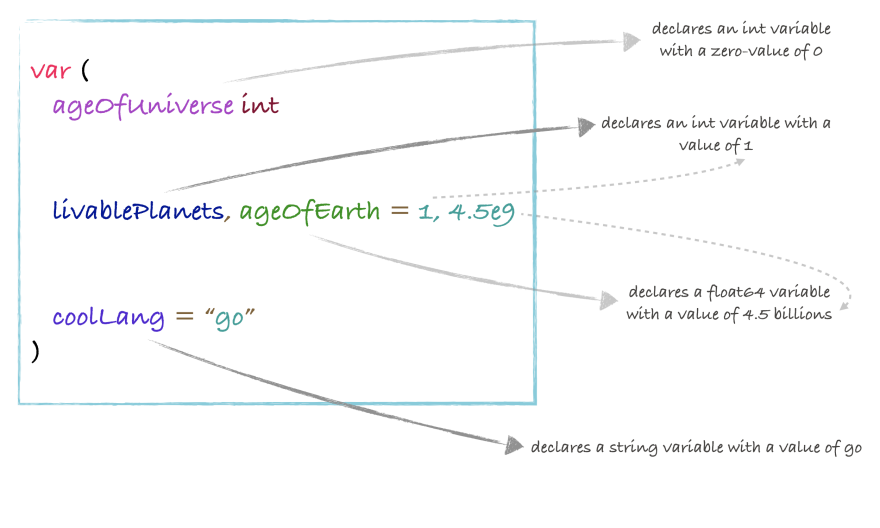 Declares multiple variables which have different types and values in the same statement. 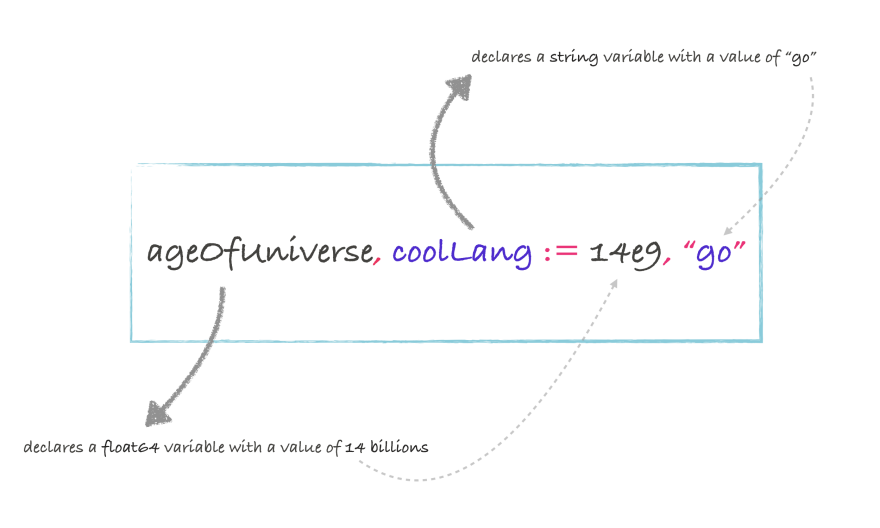 Declares two variables of type float64 and string; and assigns 14 billions to the first and “go” to the second variable. 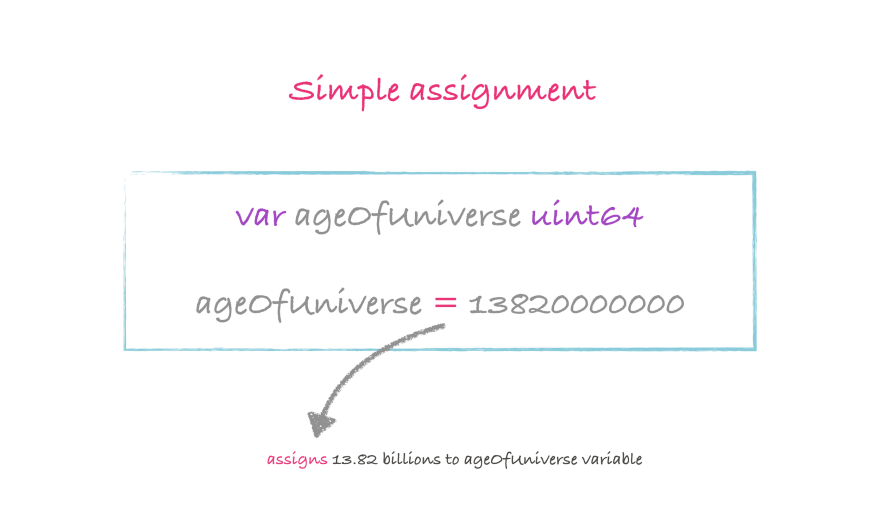 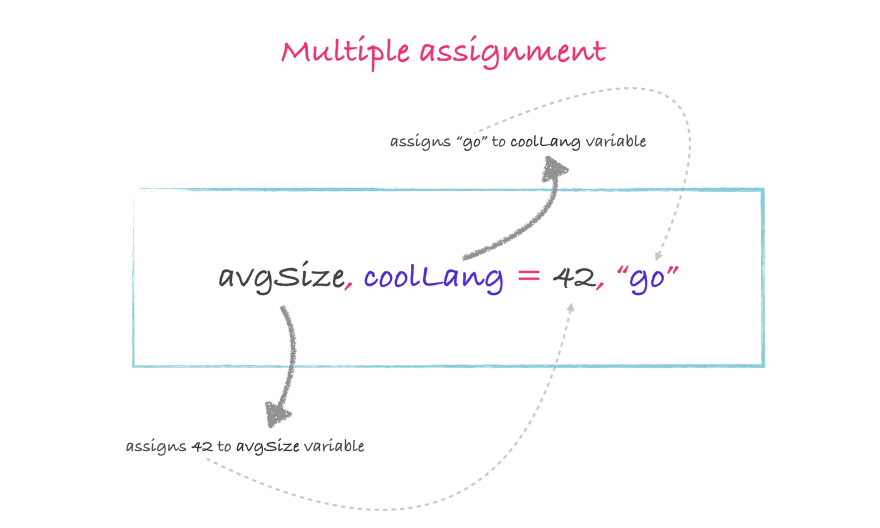 When you want to assign a wrong type of data to a variable, Go compiler will fail to compile. 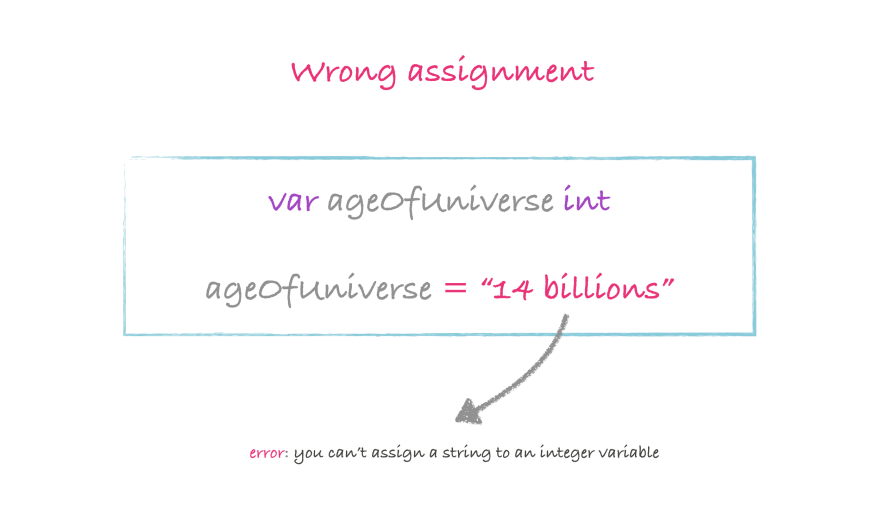 ðŸ’¡ Which declaration form should I use?

You can’t use short declarations outside of functions including main function. Or: you will meet with this error: “syntax error: non-declaration statement outside function body”.

How variables are stored?

When we declare an integer variable, 4-bytes of storage space in the memory for the variable is reserved. When the data doesn’t fit into the variable, Go compiler will terminate.

However, int is a floppy type, its capacity can change. So, we can’t just simply store the age of the universe in an int variable. We should have used uint64 instead. An int can’t store ~14 billions of years, it can only store up to ~4 billions of years on 32-bit machines. Or it will overflow, but for a 64-bit machine, compilation will work. 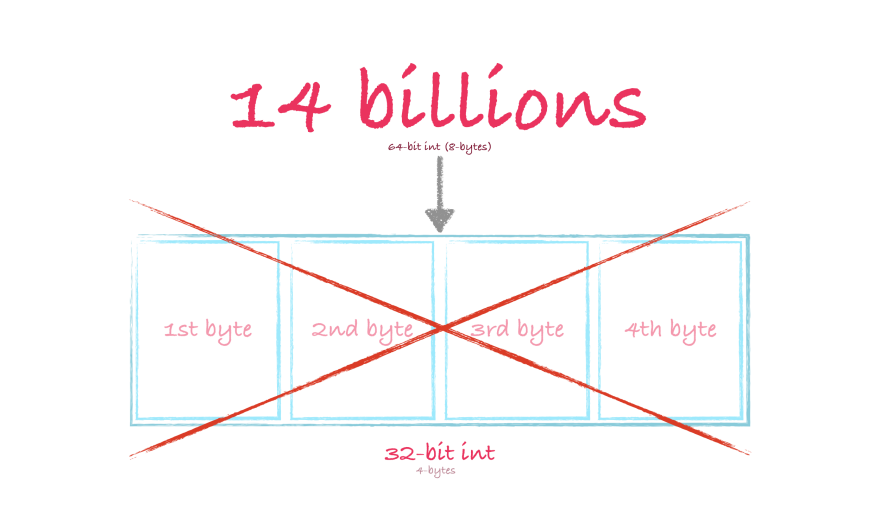 Play with it: Example shows you how many bytes the ageOfUniverse variable can store.

Incorrect code. Run it to see yourself.

Making a variable accessible to other packages

This is called exporting. To define a variable in the package scope, you can only use long declaration or multiple declaration. After that, you need to capitalize its first letter. 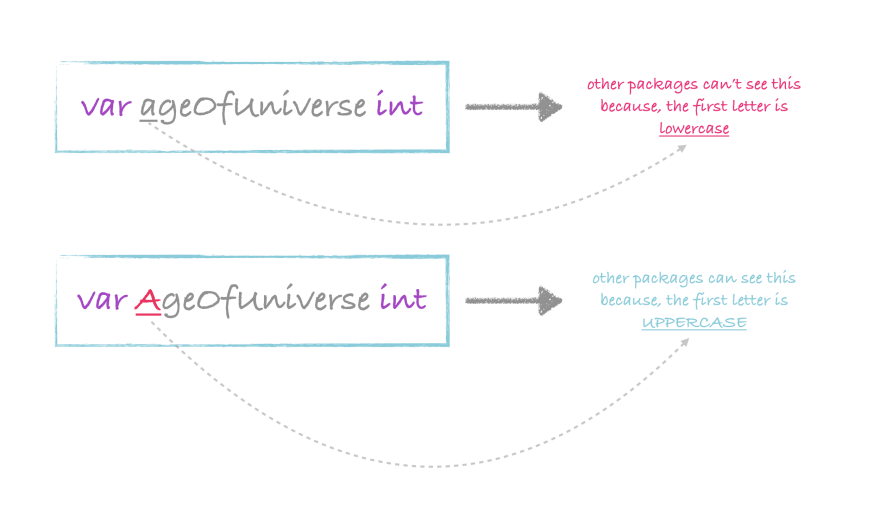 ðŸ”¥ I’m creating an online course for Go: Join to my newsletter!
Let’s stay in touch weekly for new tutorials and for my online Go course.

Once suspended, inancx will not be able to comment or publish posts until their suspension is removed.

Once unsuspended, inancx will be able to comment and publish posts again.

Once unpublished, all posts by inancx will become hidden and only accessible to themselves.

If inancx is not suspended, they can still re-publish their posts from their dashboard.

Once unpublished, this post will become invisible to the public and only accessible to Inanc Gumus.

Thanks for keeping DEV Community 👩‍💻👨‍💻 safe. Here is what you can do to flag inancx:

Unflagging inancx will restore default visibility to their posts.