When I first saw Flux, which was through NgRx, I could see that it had the same algebraic structure as list data structure. Projecting such seemigly complicated architecture into much simpler one enabled me to grasp it easy and quickly. In this post I'll share this experience by explaining:

using the least math as possible.

Mathematics: You need little mathematics just enough to know what Group is.
Flux (Optional): Not necessary but is nice to know because I'm going to take it as an example at the end.

Defining type T conforming to Algebra A is like asking question: "How to make a T algebraically?" and writing the answer into one function called eval. Take Group as example. Group's formal definition is:

Now ask a question to yourself. How can I make an instance of T algebraically? By the definition of Group, there are only following three ways:

The eval function of an algebra is the combination of their implementions of operators into one piecewise function. 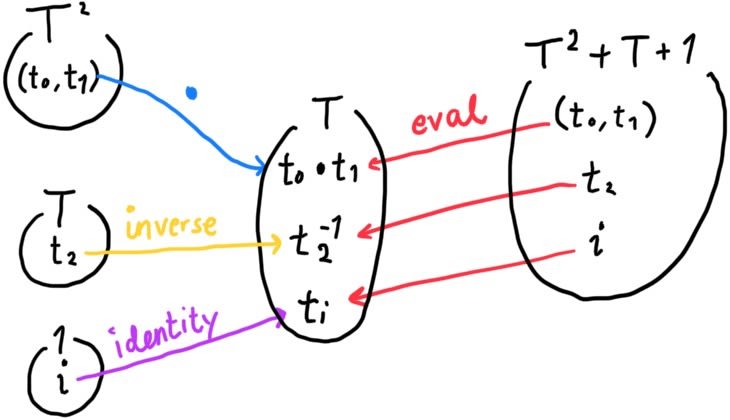 Let's see how we can define two Group algebras Mod 5 and Z (Integers) by implementing their eval function.

Mod N's eval and Z 's eval have same signature of T2+T+1→T , beause they are both Group, but different implementation, because they are different algebras.

Now that we have some intuition about algebras let's get into something more practical and useful. One of the algebras that programmers use all the time without awareness is something I'd like to call List E algebra. Just like Group is algebraic structure List of some type E is an algebraic structure as well. Again, let's start with the question: How can we make a List E algebraically? There are two integral constructors for List.

Our definition of List algebra will embody these two construction as operators.

Be aware that e is a constant for cardinality of type E.

We will create two algebras Sum and Len conforming to List E.

Sum evaluates id to 0, and e∙t , where e is of type E, which could be anything, and t is of Int, which is inferred from the type that id evaluates to, to 1+t .

They both requires two information: initial value and evaluation function of signature (E, T)->T. Wait... why is it so familiar? 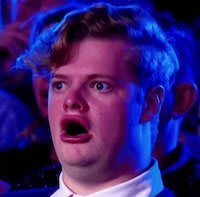 It is fold(a.k.a reduce)! The fold was the function that gets the two information and creates a new algebra!

You may have noticed the resemblance between List and Flux especially from the part where flux requires initial App State and calls the App State evaluating function "reducer". Let's say we are defining a Flux with three dispatchers with different parameters.

This Flux algebra’s eval function’s signature will be:

Since Type is Set we can use distributive property to combine dispatchers:

What I have explained is based on a mathematical structure called F-Algebra. For further learning material on this subject I recommend this amazing post: Category Theory for Programmers: F-Algebra

How To Build An NFT Minting Dapp On Flow

Why automated regression testing is key to ERP success