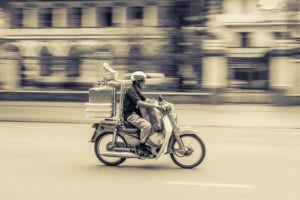 In previous posts, we learned about technology and business. With that, you can figure out what business problem you’re trying to solve and how to solve it. The next step is to build and deliver the product as fast as possible. Continuous delivery plays a crucial role in achieving this goal.

What is continuous delivery (CD)?

continuousdelivery.com defines it as follows:

Continuous Delivery is the ability to get changes of all types—including new features, configuration changes, bug fixes, and experiments—into production, or into the hands of users, safely and quickly in a sustainable way.

In practice, this means decoupling your system and automating your process. This includes steps for testing, building and releasing code to production.

Because CD streamlines the deployment process, developers are not afraid to push new features as soon as they built them. This results in smaller and more frequent code releases, which brings few advantages:

How to setup continuous delivery

On the most basic level it takes three steps to deliver software:

Anything that goes in between is unique to every team. Therefore, it’s really up to the team to figure out what gets in the way of delivering a result. However, there are few primary tools and patterns that every team must utilize to create CD.

Version control provides two features that are essential to CD:

It is impossible to release software frequently without testing it. Obviously, you need to write unit tests in the first place. Ideally, most of the code is covered by unit tests. They usually run faster and are most straightforward to automate.

In addition to unit tests, there can be integration and acceptance tests. However, they are slower. Also, they are harder to automate. Therefore, it is well worth it to optimize and automate the unit tests first.

The previous steps ensure that your teams can integrate changes into the codebase and run tests. The next step is to create a deployment pipeline that automates the whole process. In the deployment pipeline, code changes go through several stages. Each stage serves some purpose. This includes building the source code (if necessary), running all tests against it, etc. In the end, it verifies that the change does not introduce any regressions.

An example of a simple continuous delivery pipeline can look something like this:

In this post, you learned why it is essential to ship code to production as soon as possible. You also saw how continuous delivery enables teams to achieve this goal. Also, you’ve become familiar with how to create continuous delivery and what are its main components.

To further explore the continuous delivery I highly recommend checking out https://continuousdelivery.com.

How Button & function work in swiftUI

Mastodon for Developers: Everything You Need to Know

Once suspended, irek02 will not be able to comment or publish posts until their suspension is removed.

Once unsuspended, irek02 will be able to comment and publish posts again.

Once unpublished, all posts by irek02 will become hidden and only accessible to themselves.

If irek02 is not suspended, they can still re-publish their posts from their dashboard.

Once unpublished, this post will become invisible to the public and only accessible to Irek Mirgaleev.

Thanks for keeping DEV Community 👩‍💻👨‍💻 safe. Here is what you can do to flag irek02:

Unflagging irek02 will restore default visibility to their posts.