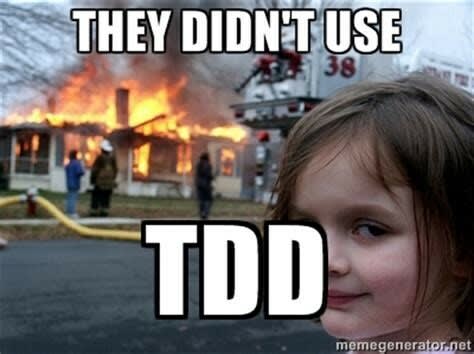 Stands for Test Driven Development. It is when you write a test first in a development which would "drive" the development of any feature. Before that let's take a look at a sample test. A test is just additional codes that test your actual codes.

If you've never written a test before, in the above snippet, I'm invoking a function called greet() in an imaginary library by me called myLibrary. Then, I'm asserting the result to match a regular expression such that my name is included in the greeting message, for example "Good morning, Ishak! Have a great day". As you can see, writing test is not difficult because it's not meant to be difficult. Writing test cases are super straightforward.

Do You Need TDD?

You may develop your application first and then write tests, but with more failing tests, come greater stress. Not only that, most of the developers wouldn't be motivated enough to write "intangible" tests after the development of actual application. In contrast, if you develop application with TDD, not only you don't have to write boring tests after developing an application, but almost every feature will have test case(s) behind it whether you like it or not because that's the nature of TDD.

When Do You Need TDD?

For small application that you develop without thinking about scalability and other issues, I wouldn't suggest TDD because it's time consuming and pretty unnecessary. However, to develop large-scale application, you need TDD for all the great benefits it offers such as eliminating low motivation to write tests, super high test coverage for your codebase, and simply allowing you to build projects with strong foundation.

Mohmed Ishak
I'm Mohmed Ishak, a software engineer, and I know a bunch of stuffs about software engineering.
5 Visual Studio Code Hacks That You Will Thank Me For (And They're Not Common Points Like "Install Prettier Extension")
#vscode #programming #beginners
Overview Of 12 Popular Programming Languages in 2021 (Beginner Friendly)
#programming #beginners
My Honest Opinion On CS/IT Bachelor's Degree (As A Software Engineering Student)
#computerscience #programming

Once suspended, ishakmohmed will not be able to comment or publish posts until their suspension is removed.

Once unsuspended, ishakmohmed will be able to comment and publish posts again.

Once unpublished, all posts by ishakmohmed will become hidden and only accessible to themselves.

If ishakmohmed is not suspended, they can still re-publish their posts from their dashboard.

Once unpublished, this post will become invisible to the public and only accessible to Mohmed Ishak.

Thanks for keeping DEV Community safe. Here is what you can do to flag ishakmohmed:

Unflagging ishakmohmed will restore default visibility to their posts.