In this article, we are going to take a look at how we can detect faces using Python and OpenCV.
To those who don't know what OpenCV is and what things it can do, must check out the previous post here.

OpenCV uses Machine Learning algorithms to detect faces. For a dumb machine like Computer, faces are too complex when represented in Computer understandable language. There is no simple test to detect faces. One has to match thousands of patterns. Using the divide and conquer rule these big processes are broken down into small task which is also known as Classifiers.

OpenCV uses cascades to detect faces. Cascades are nothing but a bunch of XML files that has all necessary OpenCV data to search for specific object in an image. OpenCV comes with built-in cascades for face-recognition but if you were to detect any other object you might have to create your own custom cascade. Creating custom cascade is a deep and complex process. Fortunately, we won't be going deep into it since we don't have to create any custom cascade for face detection.

To get started make sure you have OpenCV installed. To install OpenCV, type the following command in the terminal:
pip install opencv-python

If you don't encounter any problem while installing OpenCV, you can proceed to the next part.

The next step is to import OpenCV Module. This is how you can import the OpenCV module:

Next step is to initialize the Cascade Classifier. To do this you will need to download the haarcascade_frontalface_default.xml file from here

The next step is the most important step in this process.

The detectMultiScale function detects the object. Here the first argument is the image itself (the grayscale image), second argument is scaleFactor which is mainly responsible to adjust some discrepancies. Some faces in the image can be small while some can be bigger and this is where scaleFactor plays its role. The algorithm requires a moving window to detect objects. minNeighbors defines how many objects are detected near the current one before it declares the face found.

Remember, all these values are generally used values. You might have to experiment around these values depending upon your need.

The next step is to draw a rectangle on the image with the help of the data in faces .

Remember that we are drawing the rectangle on the original image and not on the grayscale image.

You are almost done!
Just display the image: 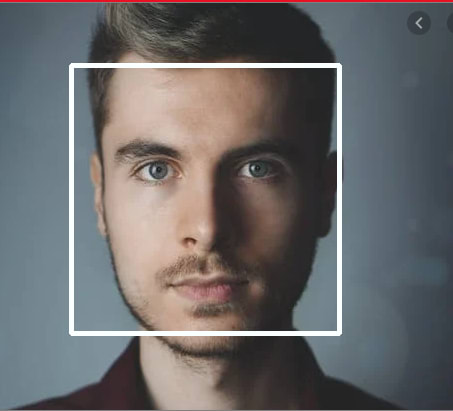 Congratulations! You made the dumb machine to recognize a face!