What? – The memento lets us take a snapshot of an object’s important state.

When implementing this pattern, it is important to keep the safe state external to the object. The object’s internal state is not exposed, thus we don’t break encapsulation. The captured state is kept in a memento object. Later we can restore the object with this saved state.

There are three distinct roles in this pattern: 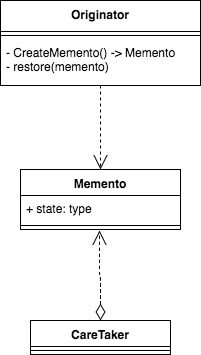 Example: Game states are saved when a player hits a checkpoint. The state of the game can include anything from a number of enemies or coins collected etc. When the player quits and starts the game later the same state at last checkpoint is restored.

Another typical example where Memento can be used in the Undo mechanism used.

The memento pattern captures the important state of an object into a memento. This memento can be used to restore the object at a later date. The pattern is implemented correctly if the originator’s internal state is not exposed to the client.

Disadvantages: Saving and restoring the state of a complex object may be time-consuming. You should carefully consider performance implications when implementing the memento pattern. Another frequent problem is exposing the originator’s internal details, thus breaking encapsulation. The client should rely solely on the caretaker to save and restore the state of the originator.

React JS Isn’t Actually A Web Framework But Why Are There So Many Others?

Once suspended, itscoderslife will not be able to comment or publish posts until their suspension is removed.

Once unsuspended, itscoderslife will be able to comment and publish posts again.

Once unpublished, all posts by itscoderslife will become hidden and only accessible to themselves.

If itscoderslife is not suspended, they can still re-publish their posts from their dashboard.

Once unpublished, this post will become invisible to the public and only accessible to Damodar Shenoy.

Thanks for keeping DEV Community 👩‍💻👨‍💻 safe. Here is what you can do to flag itscoderslife:

Unflagging itscoderslife will restore default visibility to their posts.