If you are a seasoned developer with experience working in a professional setting, this post is not for you. Else, if you are a beginner who is struggling to get your first job, and are unaware of the expected behavior in a professional setting then this post may help.
I am one such beginner too. I graduated in 2019 from a tier-4 college after rejecting a service based job in the hope of getting a product based one through an MTech in IIT via GATE. I deleted all of my social media accounts to not get distracted but still I failed. After failing GATE twice and landing with a 2 years gap with zero dev skills, I found myself getting depressed and lost all hope. No job even after 2 years of BTech, had made me regret my decision of rejecting that service based job I had got in final year.Thus, in these times of depression I became almost a beggar for opportunities. Right then, I found that some great dev working at FAANG level companies is doing a free boot-camp to prepare beginners from no-skill to skilled enough to draw a 50K per month job at a product based company. This finding filled a new wave of hope within me and I found myself totally into a beast mode to snatch this opportunity anyhow. I was like if even only one person has to get benefited from this camp, it has to be me. With this level of excitement and an already incubated beggar mentality, I found myself presenting myself as a very toxic person with whom nobody would like to work in a professional setting.
To better explain how my behavior has been, the following messages sent by me are given, with absolute respect to privacy of everyone else involved.

The first mistake I did was to send a long message right up front in a professional chatroom, and that too asking for summary of all the camp details and all the important info in the prior chats like an entitled-for-everybody's-mercy-beggar wearing his ignorance as a crown assuming that people here are for the sole purpose of serving me! And you cannot be more unprofessional and an asshole than that! 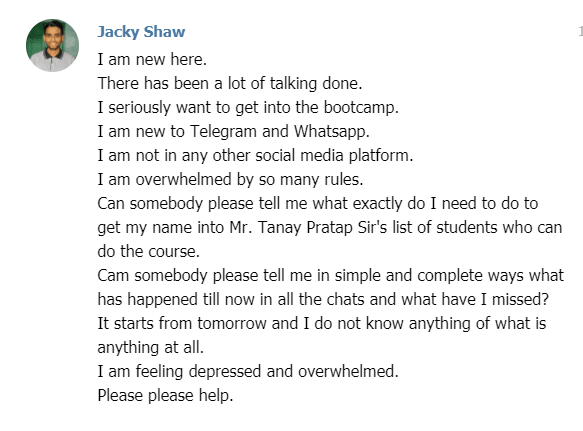 To this of course I got replies like, Go and Read the Website for all the details and You don't want to read the rules yourself and instead want to be spoon-fed, and then you want to get a job! Change this attitude first.

But this warning didn't stop me from continuing to behave like a beggar, and the the next message I sent up front in a professional chatroom, was a full fledged history of my life, with the purpose of displaying how bad life has been for me, and how much of a financially devastated condition I am in and how desperately I am in need of a job as alms. The peak of being unprofessional is assuming that job opportunities can be begged as alms. 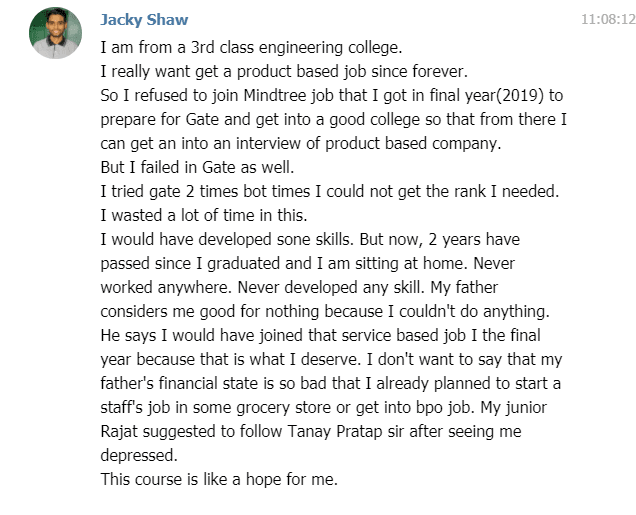 Look how generous people can be, instead of kicking me out, the mentor politely tried to make me understand that job opportunities cannot be earned by sending long desperate messages, and that everybody have their struggles in life and I am not the only one struggling. So give your best in doing the camp and learning the skills rather than sending long desperate messages in the hope of earning a job as alms. And again, I was asked to maintain the rules and decorum of the group otherwise I will be kicked out.

Well I still did not realize that I had serious flaws in my behavior and went on digging my own grave. I had deleted all my social media account so as to focus in GATE. After seeing that social media posts will be used for tie-breaking, I just had to go and recreate my accounts, but before doing that obvious sane thing, guess what I did? I sent a cry-baby message saying that I am not in social media and so I am gonna lose in the tie-breaking stage(WHAATT??...Yes! No wonder they rejected me!) only for the purpose of seeking attention and words of consolation and encouragement, as if everybody is there to babysit me and polish my way to a job or become cheer leaders for me.

I was still not blocked but was given a 3rd warning. People were generous enough to tolerate a toxic member and tried to put some sense into me by saying words like "go and create the accounts..simple!" and "more than 5K people are reading your message thinking its some announcement cause this is an announcement only channel and peer discussions are in Discord so atleat start respecting mentor's words" and "its good that you are giving up even before starting so there will be less competition for us" but still the I refused to start behaving sanely and continued doing severe mistakes.
Here I went for begging again..

Now this time nobody came for feeding my ego because they might have thought that anyway I am gonna get kicked out soon.

The toxic tendency of begging and displaying myself as a devastated someone, still had not gone, and I ended up asking for a special treatment for such extreme poor souls like myself by sending the following message:-

To that I got a respond:-

But still the attitude problem was not solved and I then did the biggest mistake of talking sarcastically to the mentor himself in a group voice chat.
But still the mentor never scolded me nor did he kick me out, but the other members of the camp got really annoyed this time, and one of them ended up sending the following message in the group chat:-

There are many more toxins that I had spilled and ruined the noble efforts of some amazing people with my filthy attitude and annoying presence. But I had my realizations after I got REJECTED even without being interviewed.
This rejection shook me to the core and woke me up from the deep sleep of toxic behavior. I was literally lost this time but made sure I never do those mistakes again. I tried with all my efforts to get a last chance by DMing the admins and the mentor(again, which was not allowed) and sending very long cries and requests. But they did the right thing of not giving me a chance so that I get the realization engraved deep within me that they had always been giving me chances to improve all along by not kicking me out on each of the toxic messages and annoying tags and other unbearable toxic mistakes.
I learned that in a professional setting the following qualities are a must:-

I got rejected on 6th Jan and today it is 26th Jan, so it took me 20 long days to come to terms with my rejection and recreate myself with a proper personality and attitude. So, having acceptance for REJECTIONS is also needed because I will face many more rejections in life and I can't take so long to recover and learn from them.

I BOW DOWN TO THE CAMP FOR GIVING ME THIS REALIZATIONS VERY SOON IN MY LIFE.

Did I even learn anything?

How to use SSH with Git and ssh-agent on Windows

Once suspended, jackykumarshaw will not be able to comment or publish posts until their suspension is removed.

Once unsuspended, jackykumarshaw will be able to comment and publish posts again.

Once unpublished, all posts by jackykumarshaw will become hidden and only accessible to themselves.

If jackykumarshaw is not suspended, they can still re-publish their posts from their dashboard.

Once unpublished, this post will become invisible to the public and only accessible to Jacky Kumar Shaw.

Thanks for keeping DEV Community 👩‍💻👨‍💻 safe. Here is what you can do to flag jackykumarshaw:

Unflagging jackykumarshaw will restore default visibility to their posts.