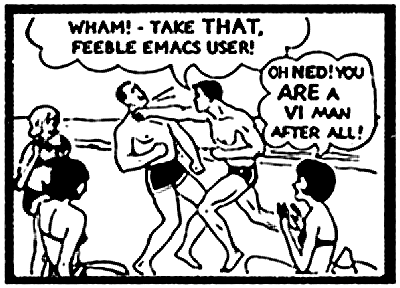 This line of thinking started with a Dev.To post entitled “Vim won’t make you a more productive developer”. Read the article for a full argument on this position, but in a nutshell, if you don’t already know it, there are already powerful editors that work with how you already know how to work, like VS Code and that it is likely a better use of your time to learn to learn other things.

I started being a vi man back in 1995, taking early CS courses. There was a lot to get in your head — New to Unix? New to C? New to Programming? Welcome to the Deep End! — and I spent nany a long night on Sparc 5s, exhausting myself as I put things like ESC and :wq and :q! and se nu into my hands and head.

In the fullness of time, I found colorscheme and nowrap and expandtab. Right now, my .vimrc has 196 lines and has a last-modified comment of 2011. I don’t believe that, but I do believe that I could spend some time and get it under 100, maybe less, but removing the settings and functions I do not use. I won’t, for the same reason the article says new users probably don’t want to learn vim; it’s a time sink and I have better things to do.

There are a few things I go back to vim for.

This was much of this week — the parts that weren’t sidestepping the vengeful wrath of Murphy — and it struck me that, instead, I should be able to modify the code locally, test it locally, commit changes, push to our work Github instance, and pull or push or CI/CD into place. Developing in place, developing in production, is a thing I don’t do for my side projects, and it isn’t a thing I should do for my day job.

The other two are the kind of things that, if I spent real time getting the other computers into development environments, rather than doing small things on them while doing most of the work on my main Linux box, that kind of thing would be worked out bny now.

vim, in and of itself, is not the problem. It is a thing that enables workflows that I need to change. An antipattern.

I feel attacked. By myself.

How the browser renders a web page