Just take a look at the below-given statistics with respect to Salesforce. Do you still doubt the future of Salesforce? I guess not. 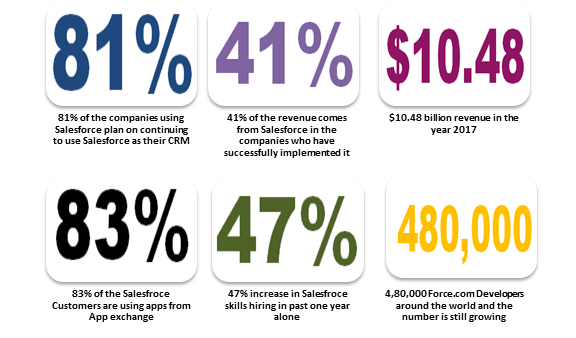 The CRM world is on the path of a continuous evolution and that too at a staggering rate. Believe it or not but the truth is that about 91% of the organizations who have more than 11 employees are now using CRM systems and tools. CRM has become a necessity. In this trend of increasing dependency on the CRM systems, Salesforce has emerged as a leading tool.

If we go by Salesforce annual report of 2017 it becomes very clear that there are more than 150,000 Salesforce customers around the world. One of its last year's report suggested that during that time Salesforce had approximately 25 subscribers per customer they had.

If we are to go by that logic Salesforce should easily have a total of around 3.75 million customers by now. Not only this the report Also suggested that the Salesforce attained roughly about 26% revenue growth over the last year and also recorded approximately $8.4 Billion in terms of revenue.

A large portion of their total revenue comes from America’s region ie around 71% which is followed by Europe ie around 18% and then the APAC which is around the remaining 11%.

Salesforce, in one of its press releases, has recently confirmed that it has around 20,000 customers in Europe. The rest of the world which is the regions of Asia, New Zealand, Africa, Australia, etc, comprise about 10% of its customers.

Therefore, with 3.75 million subscribers along with 2700 AppExchange apps with a daunting 3 million total number of install it is clearly the king of the CRM territory.

Salesforce was ranked the largest tech employer of San Francisco with 1,100 job openings on its website itself.

Well, the above facts and figures leave no room for a discussion on the point of “Salesforce Future” because it is crystal clear that it is expected to be good in fact better than the way it is at present.

There is presently a huge demand for-

Salesforce is a good career option as well because the remunerations that people with Salesforce skills are getting are really good. Glassdoor has recorded the average salary of Salesforce QA engineer to be $112,451, Salesforce Architect to be $175,355, Senior Program Manager to be $ 190,885 etc. these are just a few numbers, to begin with, there are many job profiles and many job postings waiting for the Salesforce trained person.

Salesforce has successfully established a very significant international presence and is on a growing trend in countries like Japan, India, and several European countries, which makes this number more understandable. With all this development going on in Salesforce market, it is not likely for a shortage of opportunities or business growth or even professional growth in Salesforce. Salesforce will continue to spin the fly-wheel of its growth.

The future of Salesforce is likely to be bright because of its high adaptability and frequent updates and innovations. It has very smartly moved from large screens to mobile apps and releases updates thrice a year. This helps anyone who is using it to be at the same pace with the evolving technologies and updates.

Community Showcase for GitHub Gists in VS Code

BaseCS: Making Sense of the Rainbow