As so often, it started because I was annoyed by the current situation 😅
Every time I found a theme for my editor and was somewhat happy with it, there came an update that changed the colors again. So what does a dude that is too picky about his editor colors and invests too much time searching for good themes? Right, investing even more time and building his own theme 😂

At this time I stumbled upon this article from CSS Tricks about making your own custom theme, so I gave it a shot. I knew I wanted some kind of mix of the atom one dark theme and the vs code material theme. I looked for the source code of both of them and used them as the starting point. What followed then is basically nothing but a huge amount of decisions. And I mean a huuuge amount 😅 Probably all of the UI parts in VS Code, you can customize and set your own colors. Plus all the keywords for the languages need colors ass well. To make it easier, there is a list from Microsoft here where all properties are listed. I don’t want to describe the whole process of creating the theme in detail here, maybe in another post if people are interested.

And now there was an interesting point. When creating your own extensions, you can use them just locally and that’s it. I could’ve been happy having my own colors exactly how I wanted them. And this is very related to my last post about perfectionism. I was nothing near finished or 100% satisfied with my result, but I thought about it like this: Why not just publishing it on the marketplace? Why just keeping it for myself when maybe one single other person could enjoy it? Why not doing it if there’s no one waiting for it, no one is expecting it? I didn’t announce it anywhere. So that’s what I did. And a lot of versions and 10 months later I’m now happy with it. It’s still not really 100% finished, but I’m happy using it since then and that’s the important thing.

But there happened one other thing … I really didn’t expect that but let me just show you: 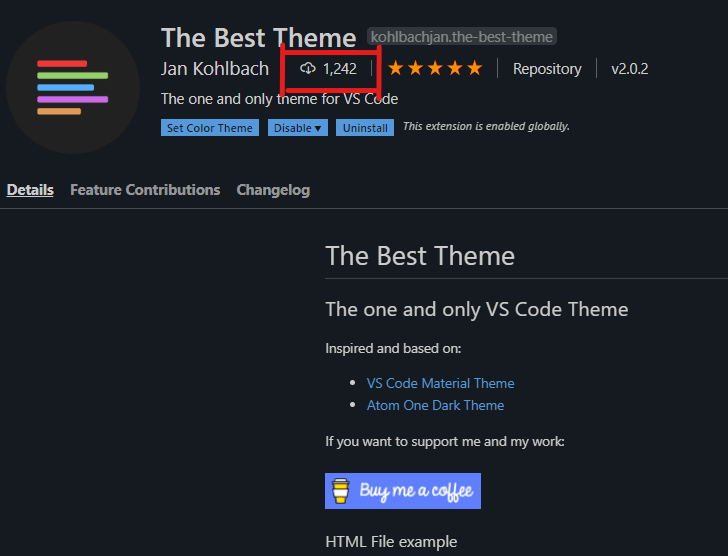 So, yeah, looks like some people also use and like it 😂
The funny thing on this is, I really didn’t market it. Neither do I have such a large following, nor did I post that much about it. I also promise, I really didn’t think much about the name, that was just like a little joke. When I now think about it, it was probably really clever to name it The Best Theme, because you know, what are people looking for when they search after a theme? 😉

I just wanted to show you this as a little real life example of why it can be really good to not be caught in perfectionism and wait too long before putting out your projects. Even if you might do things only for yourself, there are most likely some other people that have the same problem, or could benefit from using your stuff. So I really encourage you to do so. Worst case is no one is interested, but then you still did it for your purpose and can use it. Best case is actually not limited, so I guess it’s worth it.

That’s it for now, see you. Sometime. Somewhere. 🤙🏽

Migrating from VS Code to VS Codium on Linux painlessly

Once suspended, jankohlbach will not be able to comment or publish posts until their suspension is removed.

Once unsuspended, jankohlbach will be able to comment and publish posts again.

Once unpublished, all posts by jankohlbach will become hidden and only accessible to themselves.

If jankohlbach is not suspended, they can still re-publish their posts from their dashboard.

Once unpublished, this post will become invisible to the public and only accessible to Jan Kohlbach.