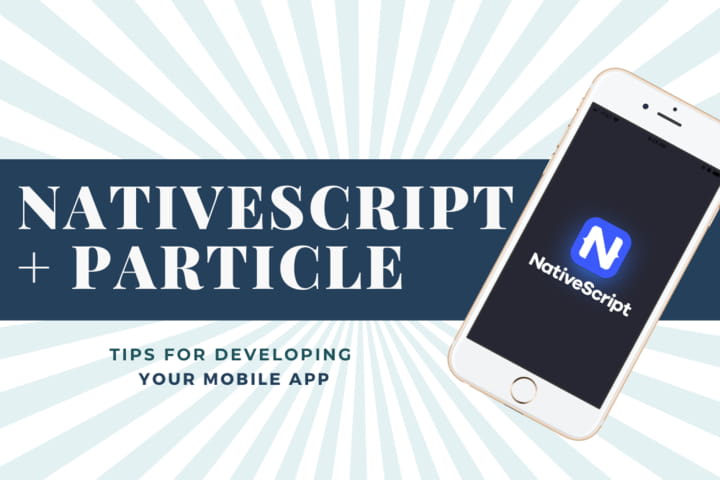 If you're developing any type of IoT product, inevitably you'll need some type of mobile app. While there are easy ways, they're not for production use.

In this tutorial, we'll talk about the basics of Particle app development. You'll learn about some of the many app frameworks you can take advantage of. Plus there's libraries, tricks and tools along the way to make your life a ton easier.

Sometimes it's dang near irritating to program multiple applications natively. You see, Swift (or Objective C 🤮) and Java aren't terrible at first glance (well, maybe except for Obj-C 🤮). But when you're resource constrained, you have to figure out a new game plan. That's where App Frameworks come in.

These frameworks allow an app developer to write, build and test cross platform apps. In some cases, the frameworks convert your app into native code. That means that they run as fast and as well as one written in Swift or Java.

I did the research and as of January 2020, here are some of the most supported frameworks:

I've used a few of these frameworks in the past. I've built a Meteor app which (surprisingly) worked. In the end I had to pick one though. What did I go with?

For the most part, NativeScript's documentation and on-boarding experience is fantastic. Not only can you preview your app inside an emulator but you can load it directly to your phone too! 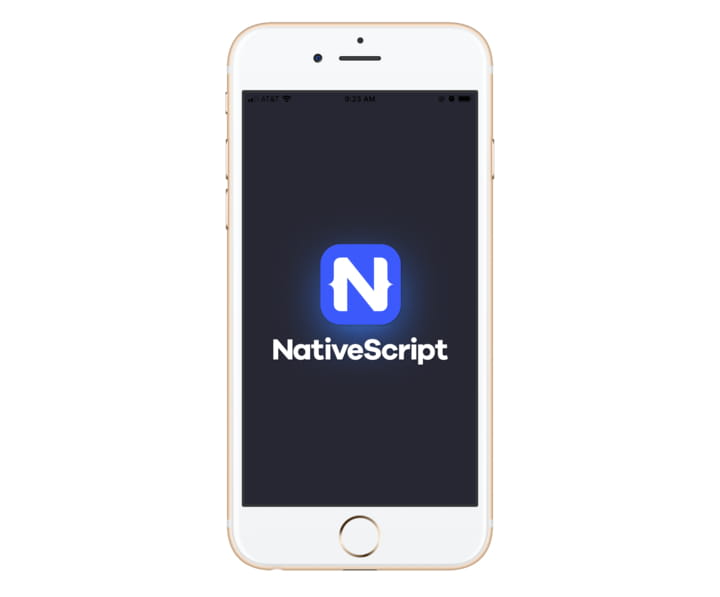 One of the cool things about NativeScript is that it supports TypeScript. TypeScript is a superset of Javascript with some extra wiz-bang features. Unlike other languages, Javascript technically has no types. If you've done any Particle development you likely know what a type is. We're talking about int, String, float and more. i.e. they're directives to to make sure your Javascript code stays consistent.

NativeScript is also compatible with most major javascript web frameworks. This includes Vue.Js and Angular.

I've only noticed one major drawback thus far. The mobile preview mode (tns preview command) does not pay well with native libraries. If you have some native platform specific libraries, you'll have to use the emulator or a device (if you have one).

If you're gung-ho and you want to build multiple apps in their respective languages the more power to you. There is an advantage over the above frameworks: tried and true Particle SDKs.

Particle has gone out of their way to make app development a little easier. This is thanks to the massive development work that has gone into their own SDKs. Yup, no more are the days you have to write manual HTTP request handlers.

Here's a link to both the iOS and Android SDKs:

Though we won't be covering them here, they reflect all the potential calls that you can make using the Cloud API.

Speaking of Cloud API, Particle has also developed a Node.js library as well. As you can imagine, you can use this for your server side code or Javascript based app frameworks. Sadly, it doesn't work with NativeScript. Frameworks that use a WebView should be more compatible.

In the case of this tutorial, we'll be mostly focusing on the Cloud API. This way you have a good understanding of the overall system. It may seem intimidating but if you do it right, you'll get the hang of it real fast.

In NativeScript you can't use libraries like [request](https://github.com/request/request). (Which happens to be the library Particle's very own DMC used in the CLI — DMC if you're reading this, Hi!) You'll have to use the provided HTTP module. If you scroll all the way to the bottom of that page, you'll see a fully fledged POST example. I'll reproduce it here but with some Particle specific changes:

The above is an example of what's equivalent to Particle.publish in DeviceOS. Let's break down the parts.

First of all, one of the main gotchas of Particle's Web API is the data format. I has first expected that they use JSON but I was sorely wrong. After actually reading the documentation I realized that most POST requests were actually application/x-www-form-urlencoded. That means when you submit data, it's the equivalent to hitting the submit button on an HTML form.

Fortunately, there is an easy way to assemble form data in Node/Javascript. We can use the FormData() object. Take a look at the above. There should be some familiar parameter names in the data.append calls.

"name" refers to the name of the event your publishing to.

"data" refers to the string formatted data that you're publishing.

"private" dictates whether or not you want to broadcast this data to the whole Particle world, or just your little corner of it.

"access_token" is a token that you can generate in order to make these API calls. Without a token though, you're dead in the water.

Where do we get this elusive access_token?

At first I had no idea.

I created an OAuth user and secret in the console. That lead to a dead end. Fiddled around with different API calls and settings. Nothing. Then it hit me like a ton of bricks. There's an access_token attached to the curl request on every device page!

Open up any device, click the little console button near Events. A popup with instructions an a URL will pop up. Copy the text after access_token=. That is your access_token! See below:

You can use this token to make calls to the Particle API. This can be to subscribe, publish, write to a function, read variables and more.

Through the command line

That's nice and everything but how the heck can you programmatically generate one? One way is with the command line.

particle token create is the name of the command you need to know about. When you run it, you'll be prompted to login. (Also enter your Authenticator code if you use one) Then the command line will spit out a shiny new access_token you can use with the API!

Through the API itself

If you couldn't guess, particle token create is a frontend to a raw API call. You can make these API calls directly too. Here's what it looks like in NativeScript.

This call may get more complicated. Mostly in the case if you have two factor authorization setup. It's well worth it when you figure it all out. After all, no one wants to manually create auth tokens if they don't have to!

Now you're ready to write and read from your devices. There's one thing though that may trip you up. Subscribing to events can be troublesome with a regular HTTP client. So much so that if you try to do it with NativeScript's HTTP client, it will lock up and never return. Luckily there is a way to handle these special HTTP calls.

Server Sent Events (SSE for short) is an HTTP/S subscription functionality. It allows you to connect to a SSE end point and continuously listen for updates. It's a similar web technology to what companies use for push notifications. It does require some extra functionality under the hood though...

After much head scratching and searching I stumbled upon nativescript-sse. It looked simple enough that I could start using immediately. More problems arose when I tried to use it though.

First, it turns out you can't use the library in tns preview mode. The alternative is to use tns run ios --emulator or use tns run ios with your iPhone connected to your computer. The non-emulator command will automatically deliver your prototype app.

Side note: I had already set up my phone in Xcode. You may have to do this yourself before tns run ios is able to find and deploy to your phone.

Secondly, once I got the library working, I noticed I would get some very nasty errors. The errors seemed to happen whenever a new message from Particle came along. Turns out the underlying Swift library for iOS had fixed this last year. So I took it upon myself to figure out how to upgrade the NativeScript plugin. I'll save you the time to say that it can be a pain and there is a learning curve!

Fortunately after some hacking I got something working. More instructions on how to compile the plugin is in the README. Alternatively, you can download a pre-built one on the Release page of the repository.

Once installed, invoking the library takes a few steps. Here's an example:

First you need to import and create an instance of the library. When you create the instance, you will have to enter the URL that you want to use. In this case we'll be doing the equivalent of Particle.subscribe(). It should look something similar to the above: https://api.particle.io/v1/events/<your event name>?access_token=<your access token>. Replace <your event name> and <your access token> with the name of your event and your freshly created token!

Then you set up the library to listen for the event you care about. In this case blob is the event I most care about.

Then make sure you configure a callback! That way you can get access to the data when blob does come along. I've made a TODO note where you can access said data.

Finally, you can connect using the .connect() method. If you don't connect, SSE will not open a session and you'll get no data from Particle.

Placement of the code is up to you but from the examples it looks like within the [constructor() of your model is a good place.](https://github.com/jaredwolff/nativescript-sse/blob/master/demo/app/main-view-model.ts)

If you're curious how to use SSE in other places I have another great example: Particle's CLI.

Particle uses the [request](https://github.com/request/request) library to handle SSE events in the app. Whenever you call particle subscribe blob it invokes a getStreamEvent further inside the code. You can check it out here. The request library has more information on streaming here.

This is but the tip of the iceberg when it comes to connecting with Particle's API. Particle has some great documentation (as always) you can check out. Here are some important links:

In this post we've talked about app frameworks, NativeScript, NativeScript plugins and Server Sent Events. Plus all the Particle related things so you can connect your NativeScript app to Particle's API. I hope you've found this quick tutorial useful. If you have any questions feel free to leave a comment or send me a message. Also be sure to check out my newly released guide. It has content just like this all about Particle's ecosystem.

Once suspended, jaredwolff will not be able to comment or publish posts until their suspension is removed.

Once unsuspended, jaredwolff will be able to comment and publish posts again.

Once unpublished, all posts by jaredwolff will become hidden and only accessible to themselves.

If jaredwolff is not suspended, they can still re-publish their posts from their dashboard.

Once unpublished, this post will become invisible to the public and only accessible to Jared Wolff.

Thanks for keeping DEV Community 👩‍💻👨‍💻 safe. Here is what you can do to flag jaredwolff:

Unflagging jaredwolff will restore default visibility to their posts.