In the survey published in August 2021 by Stack Overflow, it is stated that React.js surpassed jQuery as the most commonly used web framework. Furthermore, it is stated that over 40% of professional developers showed interest in continuing to work with React.js over the next year and have extensively used the framework over the past year. 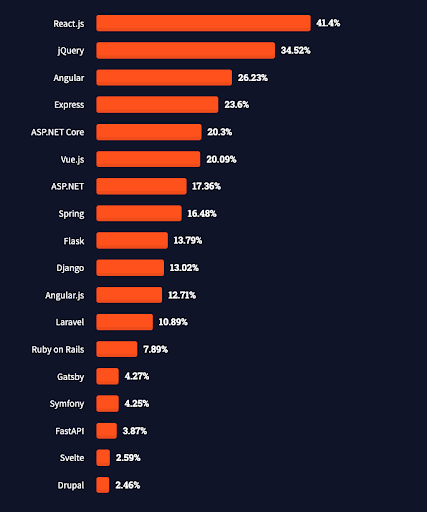 Introduced in 2011 by Meta (formerly Facebook), React.js has gained massive popularity among developers and B2B companies over the years. Trends. Builtwith declares React as a mega technology as it reports over 10,000,000 websites on the internet using it, in which they estimate 194,640,899 websites based on the 13,328,535 results they know are in the top 1 million sites.

The developers evidently show their love for the open-source frontend Javascript framework in the Github stars and forks. The technology has received 180k Github stars, 36.5k forks, and over 1500+ contributors.

The reason why this cool framework is in demand is its many benefits. The most apparent one is its ease of creating interactive user interfaces and its best rendering performances. Plus, the advantage of composable architecture as it allows you to work on individual components instead of the whole web application.

What makes this framework favorable is its virtual DOM and server-side rendering SEO. It helps React significantly reduce the load time, makes the application much faster, and gives better search ranking compared to websites built with client-side rendering.

So here's the list of some popular websites built with React and have been delivering great user experiences. These websites are an inspiration for anybody to create unique user interactions in their web applications. Meanwhile, for a precise idea of the cost to hire remote React developers to develop web apps with React.js this blog has got you covered.

With over 2.2 billion user bases, Facebook is the leading social media platform that uses the React.js library. Moreover, the mobile application of Facebook is also built with React Native framework, which has the native platform capabilities along with the React framework. Thanks to its component-based architecture, it makes it effortless for Facebook to load comments, notifications, and reactions without having users reload the page.

An American subscription streaming service and production company use React to render the server side of its web pages. Netflix rolled out a new web playback user interface for all users after a series of AB testing and optimized its performance to a great extent. It also implemented a visual playback design and launched optimized video player controls. What's more, Netflix reduced Time-to-Interactive by 30% by prefetching HTML, CSS, and Javascript (React) for future navigations. Thus, Netflix places itself as one of the most popular and accessible websites that use React.js.

An online community platform used by millions of users for submitting links, creating content, and having discussions. It has been using React.js since 2014. They used it on Reddit's Gifts page initially, and afterwards, they used it for the mobile website as React was faster and easier to work with. What's more, they have also started to replace some elements of their front page with React.

An online marketplace for lodging and homestays for vacation rentals and tourism activities, Airbnb has been using React.js for its web frontend. It also launched an open-source component testing library built with React.js. They use this library(Enzyme) to simulate scenarios and test React components.

A famous collaboration software company that builds useful software development products such as JIRA, Bitbucket, and Confluence has used React.js for many purposes.

“If software is eating the world, then JavaScript is eating software, and React is eating JavaScript.”- Travis Smith, Developer Evangelist, Atlassian

Further, he mentions in their Atlassian Developer blog, "At Atlassian, we use React internally and externally." They also have employed React for creating a new router for Jira Cloud's modern frontend experience.

Uber's software engineers have used the frontend library since they made the Uber website. They have created many open source libraries using React, among which the map rendering tools is the most impressive one. In addition, they used React and JavaScript (ES5 and ES6) to build data products as the core tools. What's more, Uber introduced their new design system — base web, a React component library for creating a device-agnostic foundation for easily building web applications.

In the above list, we've discussed some of the most popular websites built with React.js. However, there are thousands of other web apps with unique and stunning user interfaces. What's your idea of creating a web application with React? Also, comment on your thoughts on React's popularity among developers and web-based software development companies.

How to use client-side only packages with SSR in Gatsby and Next.js

Jignesh Solanki
Product Engineering Head at Simform
What are your favorite features of HTML5?
#discuss #anonymous #html
I made your stupid app ideas!
#react #javascript #webdev #discuss
What is the most "readable" programming language in your opinion?
#discuss