In this article, I'll talk about React, a popular JavaScript library, and I'll share a learning roadmap for how to master it.

React specialists are in high demand: Yandex uses it; Netflix, Facebook, as well as many other well-known products have been built using React.

React is a JavaScript library for creating user interfaces. First up, note that React is a library and not a framework, though it's often referred to as one. This is because it doesn't create any sort of "scaffold" for the project. That means that this library alone is generally not enough to complete a project. Indeed, React developers often create apps using extra tools like Redux, TypeScript, and Jest.

Instead, React just performs one task: it displays interface components synchronized with the application's data.

Soon after the advent of React, similar options like Vue.js and Svelte essentially took over the front-end world. The common denominator here is that they all help solve problems based on a declarative approach rather than an imperative approach. Here's how those two approaches break down:

As it turns out, the declarative approach is great for creating interfaces, and this has taken root in the tech community. Furthermore, this approach doesn't solely apply to web technologies. For instance, Apple has recently introduced the SwiftUI framework based on the same principles.

To better understand the difference between the two approaches, let's take a look at them in more detail. We'll create two versions of a simple application. One with HTML and JS (using an imperative approach) and the other with React (applying the declarative approach).

Our application will display a number and a button which will increase the value of the number by one each time it is clicked.

A pure HTML and JS application

Using the imperative approach, the step-by-step instructions in our program look like this:

Note that the HTML markup and JS logic are kept separate.

The same application with React

Due to the specific features of the React library, its code may look unusual for someone who is accustomed to JavaScript. For example, there's practically no layout markup contained inside the <body> tag.

That being said, let's focus on the counter application. You can find the main logic on lines 25-40.

All the code is inside the App() function. In React, this and other similar functions are called components. A component is a piece of interface that contains markup and, sometimes, its associated logic. All React apps are built using components. The component approach appeared long before React, but it's now been combined with the declarative approach here.

In the first example, we wrote an algorithm for working with our elements, defined a value, and specified how it should be modified — the steps required to achieve our desired result.

In the second case, by using JSX markup and some of React's built-in functions, we described the result we wanted to see upfront. In a nutshell, this is the difference between the declarative and imperative approaches.

If we compare these two applications, it's possible to single out the following features of the React app:

In React, It's also worth noting that applications don't work directly with the DOM tree itself. Instead, we simply describe markup using JSX, and React will decide how to transform it into real DOM elements. This is made possible by an abstraction called the virtual DOM.

Previously, there was a lot of misleading information online about React's speed. The idea was that React was fast thanks to the virtual DOM. It should be mentioned that a React application can't be faster than an app written in pure JavaScript. This is because React itself is written and executed in JavaScript.

It's worth noting that React is not a universal tool that fits any project. To understand if React will solve your problems, we should learn more about its pros and cons.

The React library can definitely make life easier for developers as:

However, there are a few potential issues to consider when using React:

These disadvantages, of course, are no reason to completely reject React or other similar libraries. But still, these points need to be taken into consideration when using this tool.

Additionally, despite the fact that the virtual tree consumes additional time and memory, for most applications this won't be critical. React remains fast and it also allows you to optimize problem areas where necessary.

As for the time required to learn React (or another similar library), think of it as an investment in yourself as a developer. React is an up-to-date, interesting, and widely-used technology. 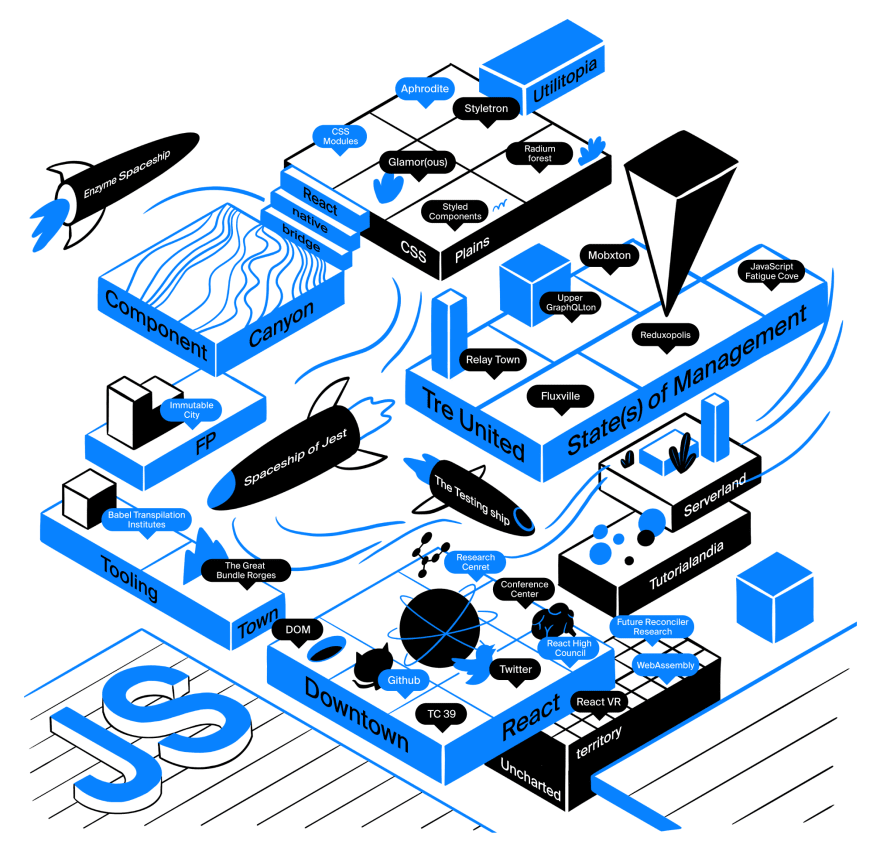 What type of projects suit React?

To summarize, there are several types of projects that would benefit from React.

React may not be the best option for simple applications, such as single-page websites, because in these cases, it will take a lot of time and effort to understand the project setup and environment.

In addition, React isn't the best choice for implementing parts of a project that are very sensitive to resource consumption. In this case, hybrid use is possible. When an application is mostly written in React but the performance-demanding parts of code don't interact with it, the library doesn't interfere with such integrations in any way. However, let's be reasonable — React is fast enough in most cases, and you can always optimize bottlenecks after the fact.

How to learn React?

One of the most useful and complete resources for learning React is the library's official website. It's been translated into many languages and the creators continually update it with new material.

We'll share a possible React learning roadmap. Each of these topics or tasks is worth mastering, or at least further investigation, as you delve deeper into this new world:

Controlling the state of the app:

React under the hood:

- Writing your own renderer

Almost all of these topics are covered on the official React website.

If you're already familiar with React, consider checking out this great article called "Build your own React"; it will help you gain a more complete understanding of how React works. You can also watch the React Conf speeches.

In addition to these resources, there are many online courses on the market of varying intensity and depth. There are comprehensive courses that will immerse a newbie student into the React ecosystem. There are also courses that focus on very specific things like using different templates or state managers.

React is a popular library that will stay relevant for a long time to come. This means that you can always find a project written in React to work on. And there is a high demand for skilled React developers.

React shows you interface development through the lens of declarative programming. This is useful for improving your general knowledge and broadening your horizons, and the skills gained will make it easier to learn other similar libraries and technologies like Vue.js, Svelte, or even SwiftUI. In addition to this, by adopting the well-established community conventions, patterns, and approaches, the better you'll learn to write good, maintainable code.

But it's also important to understand that, first and foremost, React is a JavaScript library. So, before learning React, you need to have a pretty good handle on JavaScript, along with HTML and CSS. This will greatly speed up the React learning process and will also increase your value as a developer on the job market. This fundamental knowledge will help you find the best technology for the task at hand, whether it's React or something else.

This roadmap offers a great starting point, but if you're ready to change your career and looking for a more well-rounded education in web development, come join us at Practicum by Yandex and check out our web developer course. Here, you'll learn about modern web development (including React), acquire soft skills, build portfolio projects, and more, as well as get the mentorship and guidance needed to help you properly develop your tech career. Additionally, we offer other learning opportunities in Data Science and Data Analytics — you can explore everything here.

Once suspended, lastenlol will not be able to comment or publish posts until their suspension is removed.

Once unsuspended, lastenlol will be able to comment and publish posts again.

Once unpublished, all posts by lastenlol will become hidden and only accessible to themselves.

If lastenlol is not suspended, they can still re-publish their posts from their dashboard.

Once unpublished, this post will become invisible to the public and only accessible to David Roganov.

Thanks for keeping DEV Community 👩‍💻👨‍💻 safe. Here is what you can do to flag lastenlol:

Unflagging lastenlol will restore default visibility to their posts.